Pico Button Controller not Listed in the Apps List

Which one, a switch, or a button. Picos are buttons, not switches. Caseta with wires are switches.

In my Apps I see: Button Controllers, Lutron Integrator and its child the Pico switch.

Again, this is confusing. Maybe you can attach a screenshot of what you are seeing?

Again, Pico are not switches. Also, screenshot of the device page would be helpful.

None of this makes sense given the context of "Pico Button Switch".

It's a Pico remote with two buttons.

Here's what I see in Apps. I've since added another controller named Test and that is shown. The original one named MBR Pico Controller is missing.

Here is the page for the device: 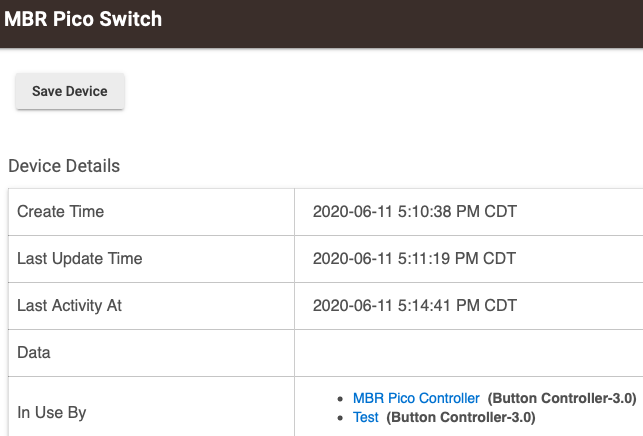 Lutron Integrator and its child the Pico switch.

I think there might be some confusion here: the Lutron Integrator app is a "parent"/container app for as many Lutron integrations as you want to add. For most people, this would be only one (a Caséta Pro Bridge or a RA2 Main Repeater)--that talks to your Lutron Bridge/repeater. Then you go into that "child" app to configure as many Lutron devices as you have. (So one child app per Lutron system--usually just one for most people--not one app per device.) Here's what mine looks like:

Inside this child app, you configure each Lutron device. If you have two and got the IDs for them as "1" and "2" from the Lutron Integration report (from the Lutron software), then you'd either walk through the "automatic" wizard to add them or use manual configuration. I prefer manual, but either way works; with manual, inside the Lutron app, you'd have something like this:

Automatic or manual--however you do it--the Lutron integration app will take care of creating the devices (Picos and whatnot) on the Hubitat "Devices" list. It looks like you've got everything configured correctly so far, even if the role of the app wasn't clear.

What you do now is up to you.

It's entirely outside the hands of the Lutron integration as long as you have your Pico configured correctly on both the Lutron app (either "Pico" or "Fast Pico," whichever set of button events you prefer) and the "MBR Pico" device page (do check the "Number of buttons" thing since it will default to the more common 5-button configuration and you said you only have two). The Button Controller app you already have is a popular choice: just choose your MBR Pico device and configure the actions (basically an ordered script) you want to happen for each button event (pushed or held; or pushed, held, and released, depending on which Pico driver you chose).

I'm assuming you want to control lights, but to give you an idea of what else is possible, here's a Button Controller I have set up for a 4-button Pico in my living room: 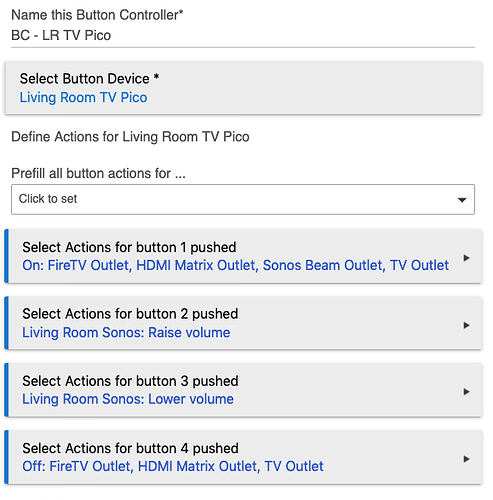 PS - Hubitatters will just talk of the Pico as a "button device"--basically a remote control--since that mirrors the abstractions Hubitat exposes about the device's functionality. You can use it to imitate a switch, as Lutron more or less intended you to do, if you want (but to Hubitatters, "switch" usually refers to a device that can literally turn on and off). As you can see above, you can make it do pretty much anything in Hubitat as long as the thing you want to do is actually possible to do in Hubitat.

If you don't want this flexibility and the lights you want to control also exist inside Lutron, you could also skip Hubitat and configure everything inside the Lutron software...but most of us are here because we like more power.

Thank you neonturbo and bertabcd1234. I removed and readded the Pico button controller and it now shows up under the parent Button Controller. And I've renamed several things to use the proper nomenclature. What I plan on doing with this remote is using it as a panic button to activate (top button) and turn off (bottom button) one or more AeoTech Sirens. That device and its child has device types "Aeotec Siren 6" and "Aeotec Siren 6 Component Chime", respectively.

Which action type would that be? 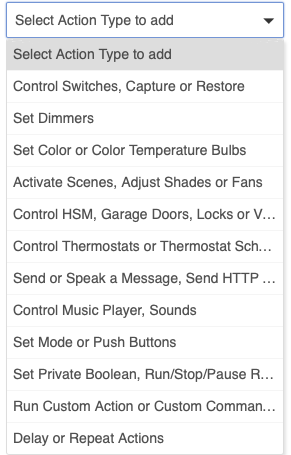 Yeah, the siren actions should be under "Control Music Player, Sounds" (or at least they are in Rule Machine--and BTW, Rule 4.0 with a "Button Device" trigger is basically a more powerful version of Button Controller, giving you conditionals and variables and whatnot to work with, should you need those, though for this you wouldn't).

I don't have one of these handy, so I'm not sure how you activate a specific sound. If it comes down to it, you might need to use the "Run Custom Action or Custom Command" category here and then choose a specific command to run on that device (e.g., if there's a command like playSound() that takes a specific sound number as a parameter, you could call that command directly instead but would likely have to it this way...you can play around and see what the "standard" actions do before you resort to this).

Here's what I ended up with. (I'll raise the volume later.) 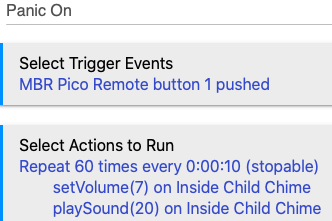 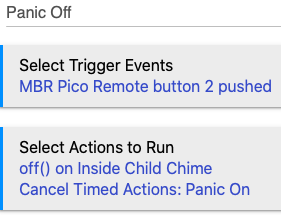 There might be a better way but it works. I should move setVolume to above the loop.