It's clear from the problems people have that lots of the people doing automation are in what I think of as "new" houses, i.e. much of the wiring is already grounded, and the walls are sheetrock instead of plaster

I've never lived in a house that new myself.

There's another way, not quite as obvious, that's also useful; Re-purpose the loop wiring to be a normal feed (hot and neutral) down to the box, and wire the light to just be controlled by a module in the ceiling box. Now you don't have any direct button to control the module, but you DO have a wall box with hot and neutral available; you can then install anything, but specifically a scene controller (or a zwave wall switch with no hard-wired load, used as a limited scene controller).

The more I work with this stuff the more I love the in-box modules! They provide so many really interesting possibilities.

Sonoff zbmini in the fixture turns a spst switch into a toggling device without repurposing the switch legs.

Using this following wiring diagram, the zbmini combined with a SPST switch overcomes the 'No Neutral' problem in current US wiring methods. The SPST switch now toggles the light. (C4 / Generic Zigbee Switch)

You're right... this isn't quite as obvious of a solution. This would also work well to wire the fixture as always hot and use a smart bulb. And again, almost any switch or scene controller in the wall.

Their web page doesn't make very clear what's going on in this regard -- in fact it's mostly about the anti-flicker features.

I think one of the big benefits of repurposing the switch loop wiring is that it avoids the flicker issue entirely.

If ON/OFF is acceptable then I agree with the above mentioned Sonoff ZBmini.

I recently installed it for a 3-Way where the switches had only 2 conductors. 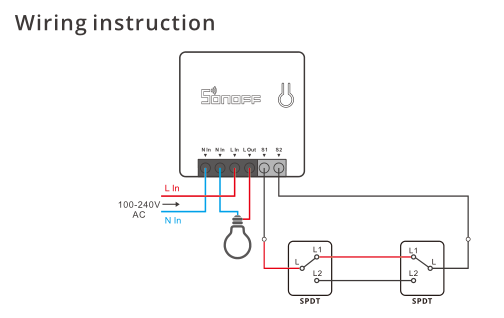 It not only works very well but it is very easy to wire. Except for wiring two switches together, the ZBmini connections are all screw terminals. This is great when there isn't a lot of room in your box.

The house I grew up in had knob and tube wiring. I remember my father having to work around gas pipes when he was replacing a ceiling light fixture. Each room used to have a gas lamp hanging from the ceiling.

Was it uphill both ways to and from school? And always in the snow??

Was it uphill both ways to and from school? And always in the snow??

Each room used to have a gas lamp hanging from the ceiling.

I still have them on the walls in the basement. Fortunately disconnected! Lutron Caseta is my friend.

Yeah, there's still functioning knob-and-tube in this house (less still functioning than when I bought the place; but the complicated back-stair light system where the two halves of the duplex have lights on all 3 floors on their own electrical service is not something I care to replace from scratch; also most of the first-floor ceiling fixtures). Was in 2 of the 3 previous houses as well, though I think I eventually got all of it in the first house (which has since been torn down to become a parking ramp).

Barefoot through the snow of course; I'm in Minnesota, after all.

But--no neutrals? Do you perhaps mean no grounds? (neutrals are white, grounds are green or bare, in modern enough work

at Ranken Technical College in St. Louis. Graduated in 1977.

All the clocks in the main building were pneumatic. No second hand. Standing next to one of the clocks you could hear the solenoid cycle and the minute hand would advance one position. Each clock had a constant low pressure air supply.

Haven’t been back to see if they are still working.

Interesting.... I've seen electric clocks that advance once every pulse but not pneumatic. Sounds complicated.