Not getting notifications- rule machine

So, I have some mailbox related rules that notify my wife and my iPhone when we receive mail. The rule works in the logs, even to the point where it says it’s going to notify our phones, but, we get no notifications. Thoughts? Any help is appreciated! 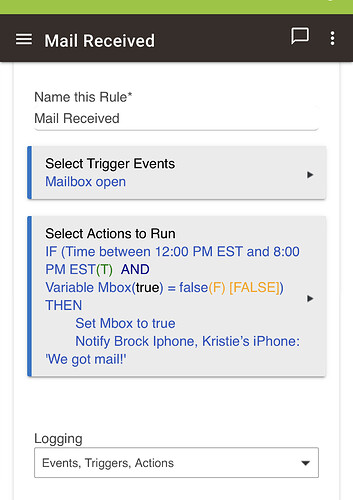 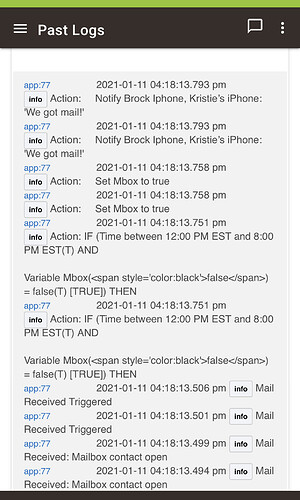 Since the rule seems to be working as intended, my next thought would be to check the devices. Under the "Devices" list on the left-side menu of the Hubitat admin UI, navigate to the pages for both phone devices. Type something in the "Device Notification" command (button), then hit that button to actually perform the command, which should send a notification to your device. If that doesn't work, then you've narrowed down the problem. How to fix it will depend on how it was set up, but if it's the Hubitat mobile app, making sure you're still signed into it (choosing your hub and the mobile app device if prompted--or again for fun just to be sure) would be a good first step.

If that does work, then there's something weird with the rule, but I can't imagine that's the problem since the logs suggest it's running that action. (You should also add an END-IF as your last action to be complete, but in this case it won't matter since there's nothing else in your rule.)

Logging out and then back in seemed to get it working. Am I going to have to do this regularly?