Not amazing, but proud of my doorbell creation

I've had a spare Aqara button for a while now and saw some people had decided to use it as a doorbell, so I set out to do the same and what would work best.

I started with the idea of utilizing IFTTT, I set the button to turn on a virtual switch, that in IFTTT triggered a process of unmuting my phone and sending a notification through IFTTT that was set to a doorbell sound - Only if I was present. - Liked this idea, but it was slow and there was a 5 second + delay

I scrapped that idea pretty quickly after the delay would be an issue, I did like the phone notification though and settled on using Hubitat to notify me - Although I do have my phone on vibrate a lot, so won't always hear it.

I started messing with the Google home/Chromecast integration as I have many devices around the house, but remembered there was the delay per device when activating a message/tone to all google homes - Some devices responded quicker than others. However, as I did discover was if I use a speaker group that delay seems to be completely gone.

I ended up with the below - Although there is a tiny delay from press to google home activation it has saved me having to get a ring or other doorbell when I have no interest in the camera side of things.

Waaay cool! It's always nice to automate something from start to finish and be successful. Great idea! I'm fighting with a doorbell woe also, but don't have a protected place to put a button.

I've heard the aqara buttons are reasonably weather proof or maybe a A cheap casing for ring, with a button stuffed inside. I loathe video doorbells I find them pointless. No one stays at the door long enough (in the UK anyway)

Looks Good!
Check out the new feature that will allow you to host the mp3 on your hubitat.
Local Files in Rule 4.0

You are awesome. I was looking at where I could host it

I'm fighting with a doorbell woe also, but don't have a protected place to put a button.

@jchurch made a doorbell from a Xiaomi contact sensor and 3D printed a housing for it. Not sure if he posted about it here in the community, but I'm sure he'll share if there is interest

I have a half wired house for door bell. I'll probably run another wire at some point as i have a sage hooked up to the first bell. Just don't have a short term solution right now.

I have a 433MHz button (via a Sonoff Bridge) triggering a sound to be played on a speaker. I do intend to change this to a Zigbee button some day, maybe just rewire the inside of the button. It's a temporary solution that stayed...

That's usually my story too. If I don't get this button wired soon, then I'm going to rig something up. I did see someone fashioned a xiaomi motion sensor for outside using a 3-d printer too. Sounds like that might be up my alley as well. For practical purposes, when fedex drops packages at my door for one.

For practical purposes, when fedex drops packages at my door for one.

That is something I've been considering as well, delivery people don't ring the doorbell anymore, or at least very often don't, anymore. 6 months ago that was not an issue. Now it is.

FEDEX and UPS allows you to set up a code for them, so they actually enter my garage and drop. It's so nice. They can't get in the main house because I have a lock on that door too, but HE notifies me when they unlock it and lock it again. LOVE IT. Every once ina while their units don't feed them the codes to the door and they leave it outside.

@jchurch made a doorbell from a Xiaomi contact sensor and 3D printed a housing for it. Not sure if he posted about it here in the community, but I'm sure he'll share if there is interest

Sure did. You just cut the reed switch off the Xiaomi contact sensor and solder some wires to a button. I picked up the button from my local electronic shop. I then 3d printed a neat case for it. Super simple and works a treat. 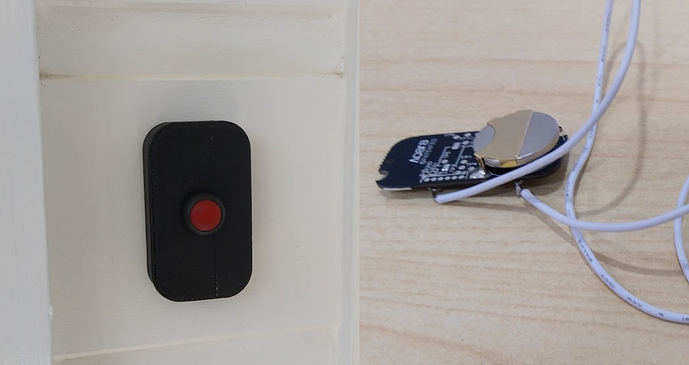 OK I just bookmarked this for later.

Every once ina while their units don't feed them the codes to the door and they leave it outside.

We can have 8 different delivery companies delivering in a single day, 2 might ring the door, the 6 others don't. I live in an apartment building in Shanghai, not a house. There is no risk of theft, but I've had food delivered we didn't notice until a few hours later when the delivery notice was sent to our phones.

I still haven't even tried it... Feels like it can't be put off forever...

Yah ... because of all of the porch poaching here, the delivery people are actually happy to do so because they can't just leave a package unless it's released. So they have to load it on the truck, try to deliver it and when they can't they have to unload it at the end of the day. So It's a win win for everyone.

I used a single sage switch to act as both my carport and frond door doorbell. Just pulled the wires for the doorbell off the transformer and soldered them on to the board where the on/off buttons are.

Standard doorbell on the outside. Smarts in the attic.

I still haven't even tried it... Feels like it can't be put off forever...

One day you'll come to the dark side

I don't know what to say. I have never missed a food delivery - sometimes I'm out on the street waiting for the delivery guy. But then again, maybe that's why I'm diabetic .....

I have never missed a food delivery

This is for food delivered by the Chinese equivalent of FedEx. Supermarkets is a different thing, they always ring the doorbell. We have a butcher and some local vegetable growers that delivers using courier. It is well packaged and can sit outside for a few hours without harm. The problem is that the delivery window is usually something like 5 hours and sent to my wife's phone, in Chinese, in the morning. By the time she wakes up she forgets to check and I have no idea it is even on the way.

My porch motion sensor typically alerts me for all deliveries, but occasionally they chuck the box on the Porch. I would say I probably get less then 20% that knock on the door or ring the bell. Lucky enough to have a covered porch where I very rarely get false positives on the motion sensor.

I use tasker to pull up my IP camera app on the phone so I can see if it is a package, Solicitor or someone we care to answer the door for. The no Soliciting sign does not seem to work and we constantly have solicitors in our area, so it saves me the interuptions. Hardest part was training the kids not to answer the door until we know if it is worth the effort.