Newbie switchover from WINK with 4 generic zigbee bulbs. I have my dashboard and lights set up to do the same robots I had on Wink where they turn on and off at certain times but want to go the next step.

I'd like the lights to turn on when I enter the room IF the illumination is below a certain level. What sensor(s) do I need to buy first of all and where can I get a tutorial on how to program it? All I have now is the HE and generic zigbee bulbs. I will probably only want to put two of the bulbs on motion detection with ambient room light detection.

the hue motion does all that.. here is my rule for it on the front door. 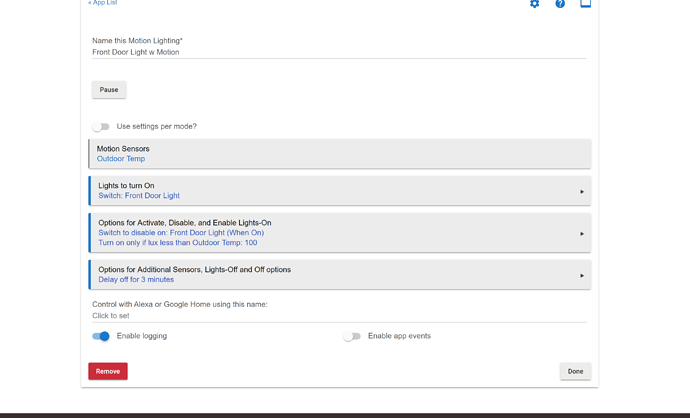 Start with the Motion Lighting app.I would get that part working like you want to first before you do the ambient lighting level.

You will probably find that one of the following apply in this use case. As always, your mileage will vary.

Take it step by step, and post back if you get stuck.

I have been using Room Director which may be overkill for your application. I plan more automation for each room so I decided to "standardize"

For me in the kitchen, the key was a ceiling mounted motion sensor. I chose the Nyce NCZ-3043-HA The criteria included appearance, battery life and features. It is expensive! For the light sensor I'm using Xiaomi Mijia Smart Light Sensor (Zigbee 3.0) So far. so good. I don't turn on the light unless the sensor tells me it's too dark in the kitchen. I'm lucky because my wife understands we are testing and I will work to improve the system over time. She is happy with the kitchen lighting automation so, on to the next room.

When I look up the Hue Motion it says I need a hue bridge. Is that true or can I connect directly to the HE?

If I do separate motion and light sensors what are my options on those?

From there you could start with simple automation or motion lighting

Hasty1. thanks.. lots of motion sensors but only 3 light sensors. Looks like I might be better starting with a sensor that can do both and maybe add other motion sensors later.

I set my whole house to Dark mode from data based on one Lux sensor and use that to make lighting decisions.

Update: I got One Hue Motion sensor that also senses illumination and a few Iris motion sensors IL07 (v3) off ebay. Things seemed to work fine for a day or two but then things started going weird.

Lights would just turn on at a times when I did not have a Simple Automation Rule set up to control them. Motion sensors would not turn lights on, or would only turn on one light on when it was supposed to turn on two.

I would remove the offending Simple Automation Rule, Light, and Motion sensor and then add it again and it work but then another one would start acting weird.

I also tried changing the zigbee radio channel to a lower channel and waiting 24 hours but didn't seem to help. Also rebooted the hub more than once.

Very frustrated and looking for advice.