I'm considering performing an install with this type of LED strip. I'm assuming (but haven't seen any definitive statement in this board) that any RGB/W capable DC controller can work with them and that you're simply using only 3 wires. I do have a few questions though:

It looks like the controller you linked to is RGBW, so the "intended"/fullest use of that controller would be for a five-wire strip (RGB, one shade of white [usually warm], plus V+). You could hook it up to a white-only (two wire) strip or RGB-only (four wire) strip and just know that you can't use the features that are not applicable because those wires aren't connected (on the Hubitat side, setColor or setColorTemperature for a fixed white strip or RGB-only strip, for example, or setColorTemperature on an RGB strip). Also on the Hubitat side, you could probably change the driver to the appropriate driver--there are options for a plain "Light" (dimmable only, usually white, although any single-color strip would also work), RGB, or RGBW.

However, what I don't think will work is a CT strip with this controller, since it has only one "W" channel. You can find controllers that are RGBWW or RGBCCT (sometimes people distinguish between these two terms, but the general idea is the same: R, G, and B channels, plus two for white--warm and cool; the difference you may see is that some present all channels as one Zigbee light and some present them as two, with separate "devices"/"IDs" for the RGB component and the white component, which the specs should indicate). It's not impossible to get some use out of it, since you could connect the warm white and cool white wires to any connector of your choosing on the controller, but then no way of controlling it on the Zigbee or Hubitat side would make much sense since you'd be manipulating at least one color channel masquerading as a white and whatnot.

The best option if you want tuneable whites and color would be either a 2-channel white controller (which I'm not sure exists) a 5-channel (RGB plus two whites) controller (and as suggested above just ignore the extra features or use a driver that doesn't expose them). I'm not sure RGBGenie makes either of these, but for a 5-channel controller, some people here have used the Gledopto. I have one paired to a Hue Bridge and it works well enough with an RGBWW strip for me. I think it can pair directly to Hubitat as of recent hub firmware, and I don't think people have reported problems with that many Zigbee bulbs are prone to (bad repeating), but I haven't tried that myself.

Yea.. I’ve been looking for a RGBWW controller for zwave or zigbee and can’t seem to find one.. All I see is RGBW...

That is my experience too. But I haven't seen any that make believable warms and colds. Usually one or the other suffers a but that way. I haven't used a ton since observing that on the Sengled light strips (they do about 2700K well but not convincing warmer whites; 4000K or so also looks good and probably better than their bulbs). Since then, I've stuck to 5-channel strips, of which I think the Hue Lightstrip is still the best (fantastic CT range), but priced...appropriately for that behavior.

The Gledopto I mentioned above is also one I've used. It has less range (to my eyes; it won't complain itself) but you can get a lot more lightstrip for the money, and again a regular warm or slightly cool white both look good enough.

Hi everyone. @beddini, as always, we appreciate you considering our line of products.

Just wanted to mention a few things, the ZB-1007 controller that is linked above does do CCT strips. The reason the channels are marked 1 - 4 instead of RGBW is because it is capable of doing two CCT strips. We have not tested this feature in Hubitat as of yet however. But will do so in the next few days and update.

More important though is we are coming out with a Zigbee 5 channel controller. It is dip switch settable for single channel dimming, CCT, RGBW, and RGBWW. We have sent in a unit for Mike to look at but we have no timeline. Consider this a leaked photo... :) 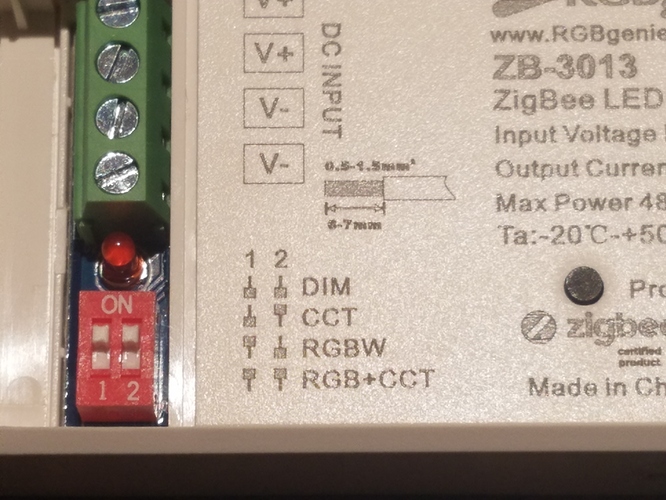 Ooo.. Is that going to come in z-wave as well?

I’ve been wanting to use strips for under cabinet lighting in the kitchen.. But have been hesitant on making the jump on this because of my OCD desire for CT to match between all my light sources in the room...

We do have a CCT Zwave controller and like the unit above, it is not officially released yet. Want to be the first? PM me.

@Gnant.. that's awesome a driver/controller combo that handles every strip type would solve a lot of problems, and allow you to create one product that operates all strip types. Please let me know about the current ZB-1007 handling the CCT form factor properly w/ Hubitat and custom driver. I'd love to have this working for a couple of teed up client installs.

any thoughts at zigbee vs zwave for stability? I can use either, but have no experience with zigbee, and less than enthused about zwave.

is there any way in rule machine (or some other app) to make a mapping array for CT based on dimming level?

For all color RGBW and CCT lighting Zigbee is the preferred protocol. For many reason.