I've got some z-wave shades(Specifically they are Somfy shades using a Somfy ZRTSI Bridge) that respond to the following Z-wave commands:
1)Up
2)Down
3)Stop (When not moving, this will cause the shade to go to a "Favorite" position, so this is kind of dual function)

Right now I can use the "Generic Z-Wave Shade" Device driver and it exposes "Up" and "Down" functionality. I can also expose the shade to HomeKit and Alexa via MakerAPI and Alexa built in apps.

Is a new driver the way to go about this? I can't find a way in RuleMachine to issue the "stopLevelChange" command, otherwise I'd try and go that route. Is it possible someone has a Z-wave dimmer or z-wave shade source that I could start with and modify?

I was trying to get the favorite position to work as well, and found a solution.

I used this device handler that was developed for SmartThings and replaced "physicalgraph" with "hubitat" and it works. Dim to 50% and it moves your shades to the my/favorite position.

Can you not do a Set Position to put the shade in your favorite position? 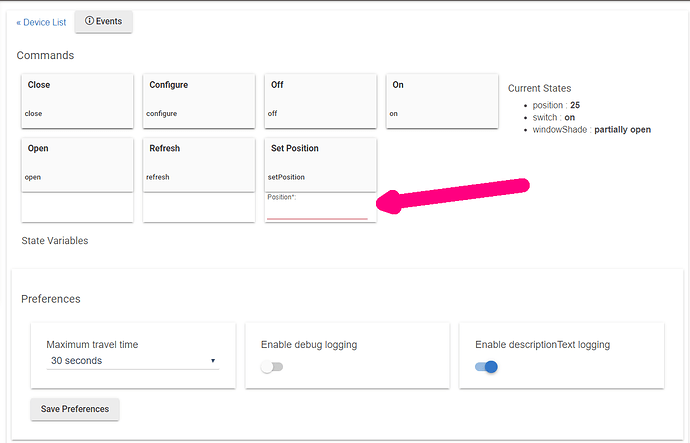 No, at least not for me.

I had three of the Home Depot 2" tilt blinds retrofitted with Somfy tilt motors, using the Somfy ZRTSI Bridge. When I had everything connected to SmartThings, I was able to tilt the blinds in any position I wanted using the device dimmer setting in the ST app.

But once I set everything up in Hubitat using the Somfy ZRTSI Bridge, I was only able to turn the blinds 180 degrees to the right or to the left. I was never able to have the blinds stop at 50%, which would have been considered open for viewing.

I made a video about it 6 months ago asking for help with a driver for the Somfy ZRTSI Bridge, but no one had an answer.

I understand. I have the cellular shades so Set Position refers to vertical travel. I don't have any blinds (automated or otherwise).

The ZRTSI that I have only supports three positions: fully open, closed or a single preset, I never could find a way in the generic z-wave shade driver to make it go to the preset. But with this driver, dimming to 50% (e.g. "Alexa set dining room shades 50%") moves them to the preset.

@nkyspike Have you tried setting the upper limit of your blinds so that they will only open to 50%? I have 3 of those Somfy retrofit motors on 2" blinds, they are setup this way. So when "fully open" they are actually at 50%. I never had a need for the preset on blinds, but I do use it on shades.

No. That never crossed my mind. I was so use to how it was setup and working fine in ST. I was expecting just to add it to Hubitat and have it working. That would have save me a lot of headaches, and money.

About two months after my post back in July, someone mention about using the Somfy MyLink to control my ZRTSI Bridge with Hubitat via IFTTT.
It worked about half the time, other times it would take 20 to 40 minutes before IFTTT would send the command to close the blinds.

About 2 months ago I gave up on using the Somfy tilt motors and ZRTSI Bridge, plus the Somfy MyLink, have all of it sitting in a box in my basement.

I replaced all three with the iBlinds Z-Wave tilt motor kit, with Solar panel. So far everything has been working great.

I've been wanting to move away from the ZRTSI Bridge for a long while anyway. When I was first started looking for the ZRTSI Bridge about 4 yrs ago, everybody wanted around $250 for them. I was lucky enough to find an online site had it for sale for a total or $89. I always worried about it failing on me and having to replace it.