Mute Voice when Button is Held vs Pushed

Hoping someone can assist me in creating either a Rule Machine or a Simple Rule (or edit HSM somehow) so that I can disarm the system (which plays a message that the system is disarmed and gives the time etc,) when I press button 1 on my Aeon WallMote, to where when I press and Hold button One it still performs the mode change to Good Morning and disarms HSM but does not play the voice message over the speakers.

The goal being that if I or my Wife wake up early we want to disarm the system without waking the rest of the house up. 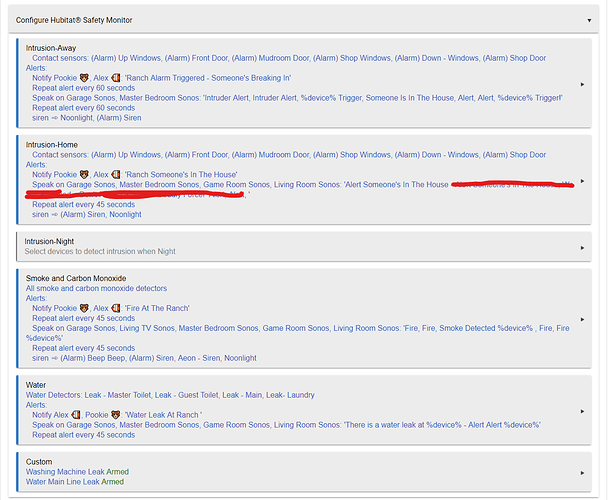 If anyone has any ideas I would great appreciate it. I cannot find where to add an exception in any of the above that allows a condition of Button 1 Held vs Push that allows skipping of part of the rule.

Thanks in advance for your help!
-Alex

Do you have part of what you want working now? I don’t use HSM, but I have it loaded and have experimented with it a bit. You mention playing a message when the system is disarmed. I don’t see any option for that in HSM, but maybe I am missing something. So I suspect that rule machine would be used to play the message.

Appears to be several ways to arm and disarm HSM…

You can set up HSM to automatically disarm it when the mode changes, but the choices there are Day, Evening, Night, and Away. In RM, those are also the modes listed, but you can also use a variable as a custom mode name. You mentioned mode of “good morning” - if you are using a custom mode name, then you wouldn’t use that method to disarm HSM.

Another automatic method in HSM is to disarm when a push button switch is pushed. If you want to use that method, then create a virtual push button, and have HSM disarm when it is “pushed”. In RM, you would then use your wallmote button 1 to make the announcement and “push” the virtual push button, but when you hold the wallmote button (a different trigger in RM) it would “push” the virtual button but not announce anything.

Also, in RM you can directly arm and disarm HSM. The choices are disarm and disarm all. You could also have separate triggers for push and hold and have RM disarm and announce, or just disarm, depending on which trigger it gets.

In the latest version of RM software you have 2 choices regarding button triggers. You can select “Button” and make 2 separate rules, one for push and one for hold. Or you can select “button device” and add the push and hold in there with different actions for each.

Thanks for getting back to me on my question I am using HSM auto trigger when mode changes. So right now when I hit button 2 it changes my mode to "Goodnight" then in the morning I hit button 1 and it changes to "Good Morning" so being able to hold button 1 vs push and have the mode still change to GM but skip the one line for play voice is the goal.

I thought about making the voice trigger off of RM if button 1,2 or 1-hold are performed but if I do that there is no real way for me to know the system armed. Right now that voice confirms that it armed. If it fails there is a second message that voices over the that there was a failure (say window is open).

Any suggestions you have would be great, hopefully the extra detail I provided helps.

Your original post was about how to disarm it quietly in the morning. You are now also mentioning the arming messages. I’m not sure if you would want the arming messages muted for any reason. As you mentioned, you need to know if it was armed or not.

For disarming, there is a way to use rule machine to do that.

However, I have some more questions about how you are doing it now.

When I look the HSM screens I can see where you set “Arming Alerts...Configure Alerts for Arming Failures”. In that section you put in what you want the message to be for arming failures. I don’t see anything in there about a message that says it’s armed ok, but maybe that is automatic? I don’t have a speaking device, so I can't test that.

What I don’t see anywhere in HSM is somewhere to set up any kind of message when you disarm the system, which is what you originally were asking about.

There is a way you could use RM to reliably tell you that it is disarmed. RM can has triggers for all of the HSM status reports, including disarmed.

If HSM really is speaking a message when its disarmed, and you can turn that off, then use RM to speak the message instead. When you push the button, before it changes your mode to “Good Morning”, first set a global variable called “mute” to false. But when you hold the button, you will have it change that variable to true before setting the mode.
You might want to put in a .5 second delay, before changing the mode, just to give the variable time to get set.

Now use a second RM rule for the speaking, this rule is triggered when HSM actually disarms…

So that could solve your original question about muting it in the morning when you disarm it.

RM also has other triggers and conditions related to HSM, so if you did want to mute arming messages, you might use something like that also. A rule may need to be triggered from the push button, then it could change the mode, wait a few seconds, and speak different messages depending on the status. But it wouldn’t be able to easily tell you what window was open in case of an arming failure. Anyway, that’s just an idea to look at in case you also wanted to mute the arming messages.

not sure what you asking.. but you can use rule machine or button controller to do button held and then do anything you want in the triggers..

or do you need to know how to actually disarm 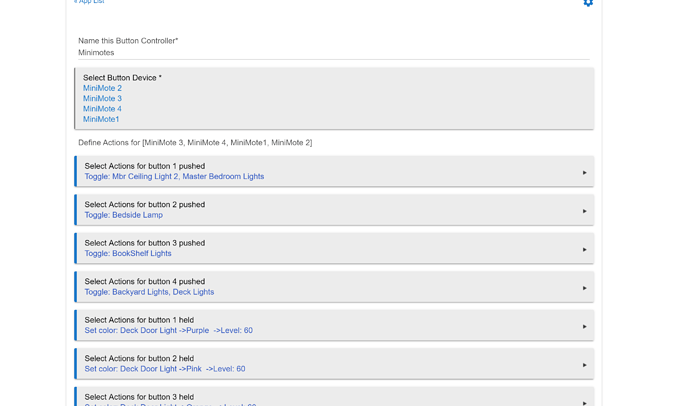 here is how i would do it..
first you need to set the disarming method in shm

ie night or away arm, and home disarms
so that just setting the mode automatically changes the armed/disarmed state of shm.

see the first picture below..

then i would write a rule with the built in app button controller .. see 2nd picture below. or if you prefer you can write two rules in rule machine,, one for pushed one for held with the same actions as shown below in button controller.
! 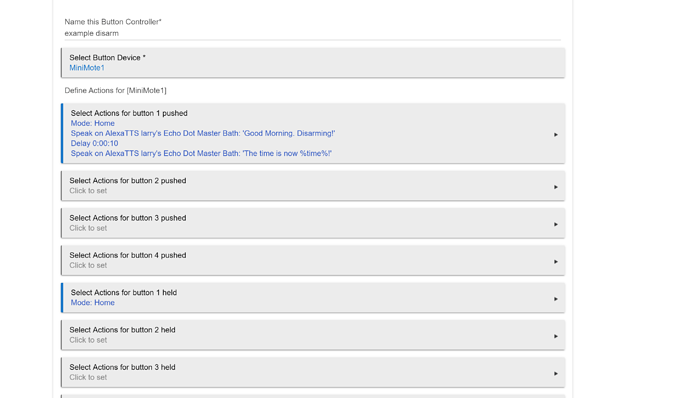 Thanks Khan, I'll give that a try when I get home tonight.
-Alex