Would it be possible to ad temperature sensor triggers as well. There are switches and contacts already.

Greetings. I'm going to say yes. I have not yet, however I have been given advice in using such to trigger cooling fans on some electronic equipment. Must be possible.

Would it be possible to ad temperature sensor triggers as well.

You can use temperature changed < <= > >=
Just select your temperature sensor in the triggers section.

EDIT: Just read your post again. You are refering to the Motion Lighting app not a general RM4.1 question. Oops. Sorry.

Considering that the app is called "Motion Lighting" and that contact sensors were a relatively new feature after a few requests--and that staff have a history of being careful about what features they add to apps to avoid them becoming overly complex--I wouldn't count on this happening. But, of course, none of us are ones to tell you for sure, so staff will have to comment.

But given how unlikely it is, I suggest you find an alternative that is already possible today. Rule Machine, as suggested above, would be a good choice. Simple Automation Rules might even work, depending on what you want to do. If you're not a fan of any of those options for your entire automation, you could also "trick" Motion Lighting into using your temperature sensor by using a (very simple) rule that manipulates a virtual device that Motion Lighting already can use (like a motion sensor). Something like:

Then keep using ML as normal.

For an average person "like me" rule machine is far too complicated and cumbersome.

Then Simple Automation Rules might work (it's hard to say without knowing what your actual goal is). But otherwise, the rule above is pretty easy to create if you wanted to just create a virtual motion sensor to use with Motion Lighting--then you could keep using Motion Lighting for your automation instead of moving the entire automation over to Rule Machine. I fully support using the stock apps whenever you can--just proposing this since I'm not sure this feature will make it in.

Rule Machine doesn't have to be complicated. Here's a rule that controls my attic fan based on temperature: 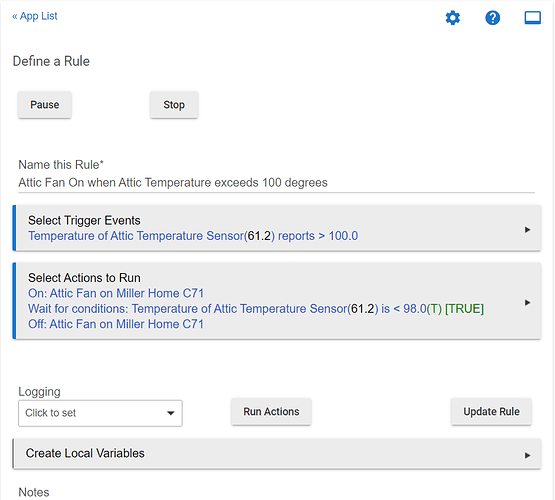 Really? I use it all the time if I need a simple/quick rule.

Sorry you are having issues with it, as it is very handy.

If you are having trouble getting it to do what you want, whether it is this rule or another, perhaps report it to support as a bug and they will fix it?

That's not the best attitude when asking for help. SAR works just fine. Maybe in another thread you should ask for help with it.