I'm fairly new to HE, I've had Hue lighting for ages though and just received some Aqara motion detectors.

I want to setup motion lighting in the hall, if off turn to 30% and off after 5 mins if no motion, if on leave as is.

Initially I set it up using Simple LIghting, turns on to 30% with motion and off in 5 minutes, works okay but if someone sets the light manually to 100% then triggers motion, it goes to 30%.

I tried the motion lighting app but it didn't work at all for me, the first motion would turn the light on then subsequent motions when lights were off didn't turn them on?

Am I best off with Rule Machine for this?

Motion lighting should handle this just fine. I use many of them.

Something like this should work for what you described above. 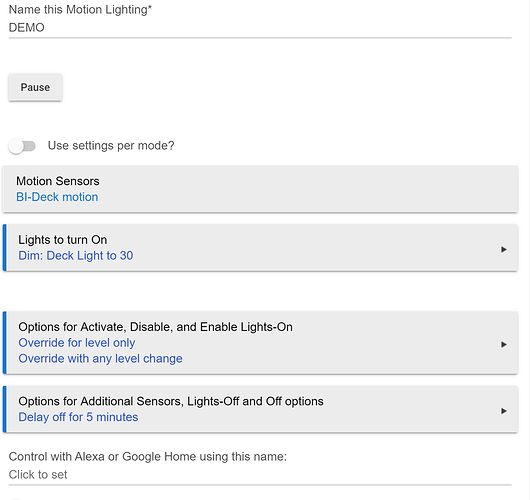 Here is the documentation for Motion Lighting:
https://docs.hubitat.com/index.php?title=Motion_Lighting_Apps

The following settings should do what you want.
Enable override with dimmer level change (defaults is enabled)

Disable this option if you don't want to prevent a motion inactive from turning the lights off , and stop additional motion active events from changing the dimmer level if you manually adjust it. Keep this option enabled if you want to be able to manually set lights low or bright, without the motion lighting settings overriding your manual dimmer setting when motion is detected.

Override for level only (default is automation suspend)

If this option is enabled, motion active events will not change your manual dimmer level settings, but when no motion is detected, the lights will still turn off when your specified time has elapsed.

I had trouble understanding the meaning of several options in motion lighting til I read the explanations of what each one does in the documentation.

Me and you both!

Thank you for the code ... very helpful

Override for level only (default is automation suspend)

If this option is enabled, motion active events will not change your manual dimmer level settings, but when no motion is detected, the lights will still turn off when your specified time has elapsed.

Thanks. So if my dimmer is already set to 80% then motion does not set it to 30% but turns off after 5 minutes. And if I want the light to stay on at 80% I would use