I'm currently very frustrated with the way Motion Lighting Apps work (or don't work as the case may be) and would like to understand whether it's user error or something else.

I have a couple of issues. The first one is that it doesn't seem the rule works correctly when the configuration changes. For example, if I switch the "Don't turn on if turned off manually" or "Enable override with dimmer level change?" option, and save, and then a while later turn the option off again, I still get in the log something like:
Not turning on: override in effect

Extremely frustrating...
Just to be clear, I don't even know what override it is talking about... And the documentation for these options doesn't really exist as far as I can tell.

This issue has completely broken my rule and the only way I can figure out of this is to start a new rule.

The second issue is that I can't figure out a good way to freeze the light on or off... As an example when watching a movie and I want the light to stay on and dimmed. I've tried a bunch of things and the only thing I came up with in the end is to disable light automation after dark which is kind of the opposite of the point of the whole excercise.

Would appreciate any input on whether others have experienced these issues and how you're dealing with them in your automation setup.

Here's a screenshot of the current app: 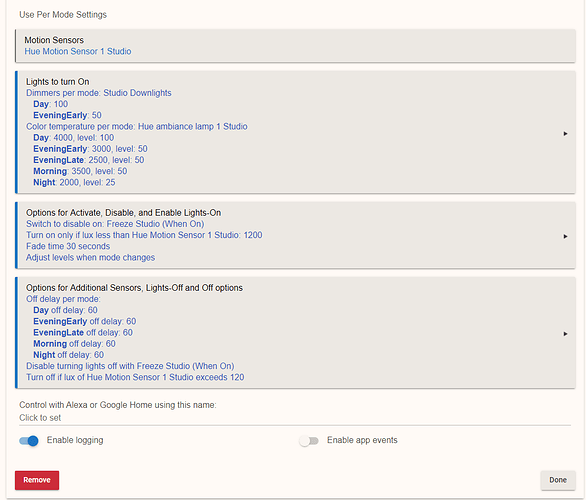