However, it can be flashed with router firmware

Can this be done using a windows pc?

I haven’t done it, but the answer is yes. Here’s one multi-platform tool: 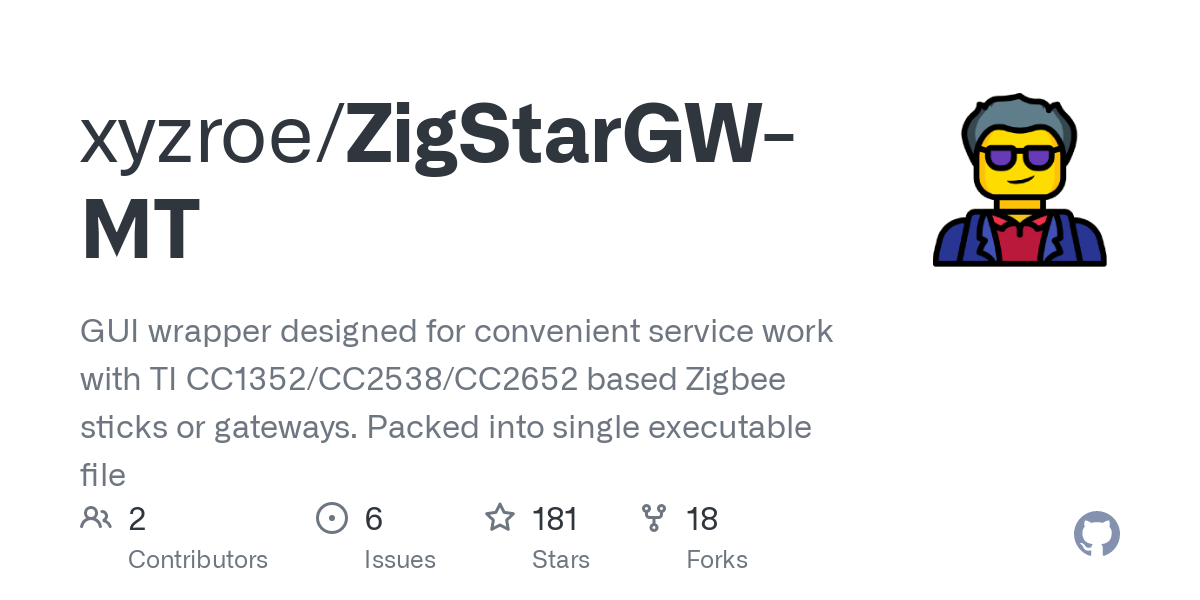 Also for the Sonoff, here's the link for router firmware:

I ordered 3 to play around with.

maybe I’ll be able to use my Samsung plugs for something besides just repeaters.

Three coming today and 6 contact sensors. I’m hoping the sensors stay connected. My Zigbee sensor mesh (as opposed to the one with my lights) is very clean, so I’m hopeful that I’ll have better luck with them than others have reported here.

I flashed them with the updated router firmware and they connected right away.
EDIT: Forgot to thank @aaiyar , so thank you @aaiyar

EDIT 2: The routers seem to be working well, immediately taking the top 3 spots on the router page with the one closest to the hub (about 15 feet away) taking 5 devices right away on the route table. I used the firmware from the develop repo since it increases the output from 5 to 9dbm. I ended up using the TI software to update them after downloading the Silabs uart to usb driver from Windows update. They feel well put together.
I have paired 4 of the contact sensors so far. They seem to be working well, maybe a bit slower to respond than my Iris V2. I put a thin piece of cardboard on top of the battery to keep it from losing contact since the ground holding it doesn’t really accomplish this. For around $7 each I’m not complaining.

EDIT 3: The repeaters and contact sensors have been perfect so far. No devices have dropped and I’m thinking of adding a couple of my Hue dimmers back to HE to see how they do.

8 days later and this is what my route table looks like:

In the spirit of “good antennas make everything better”, but not wanting to plunge into modding my hubs as 85% of my setup is Zigbee, I just purchased 4 of the rp-sma L-com antennas to replace the ones on the Sonoff Zigbee dongles I recently added as repeaters. From what I’ve been observing, the antenna seems to be the weak link with these.

EDIT: Following up on this: after a few days with the new antennas, I can say that they do make a difference in performance, but not really noticeable in my environment because I didn’t have any problems with them prior to the upgrade. I don’t have a way to view the entire mesh, but for what it’s worth,all of the routers with upgraded antennas have moved up on my getchildandrouteinfo page. Considering the antennas cost as much as the dongles did, I’m not sure if people may be better off buying more dongles instead, but I personally have run out of places to discretely put repeaters. I’m always leery of adding possibly unnecessary devices in case they might do more harm than good, but I’m happy to report no ill effects. In fact the one contact sensor that occasionally would miss a closed event and annoyingly cause a false “door left open notification” hasn’t done this since adding these to the mesh even though I have added 6 additional contact sensors. Hopefully in time my family will again believe that notification when it happens.
As I add more exterior sensors, the upgrade will likely be more beneficial.

Do you have a link to the antenna you used?

I know the L-Com antennas @Ken_Fraleigh linked to are very good - I think those are the same ones that @lewis.heidrick uses for external zigbee antennas.

I just want to add that for Sonoff USB dongles, I have been using this cheaper 2.4 GHz antenna. It also provides dramatic improvement over the antenna that the dongle comes with. The specs are similar to the L-Com antenna. I have used them on Sonoff dongles that I use as routers as well as one that I used as a coordinator.

I just ordered the one that you linked to. I needed one more. I probably won’t be able to tell the difference between them since the lqi for every repeater has gone up to 254-255 since adding these, but now they will match.

Well…. I just switched them back to the original antennas. I noticed that fewer devices seemed to be routing through them and when comparing lqi results with both antennas using the Ikea driver, the original antennas had higher lqi than the L-Com. I just thought I should let anyone following this know. I still have to test the Amazon one @aaiyar linked more, but initially it appears it might be slightly better than the stock antenna.
Edit: Never mind, the Amazon one gives the same results as the L-Com. Below is a screenshot showing the Stock antenna, the Amazon one, then the stock one again.

image1170×2532 211 KB
If anyone can make since of why this would be, I’m all ears. The Pantry light is a Sylvania Flex XL about 20 feet away in a shallow kitchen pantry (otherwise open space) and the other Sonoff repeater is about 15 feet away around a corner (no other obstructions). From what I understand, this is reception quality from the other device, which I think should improve with the larger antenna, not get worse. Maybe resident antenna expert @lewis.heidrick can shed some light on what’s going on?
1 Like
kuzenkohome April 13, 2022, 11:36pm #34

Having used the generic ti cc253x zigbee routers, iris plugs, sonoff zbmini, third reality plugs. I suspect that the lqi differences are more a factor of the brand of zigbee chipset. And their respective calibrations.

All my smart plugs are always around 250+ lqi. The various sonoff variants (suspect ti chipset) are always 0-200 lqi but always work.

The sonoff is a TI 2652P and the connection to the hub is always 254-255 if the hubs route table is accurate (which I’m starting to think is a fantasy number), it’s the other devices that should show improved lqi with the upgraded antennas (which aren’t) that I can’t make since of. Also, since switching back to the stock antenna the route table shows more devices repeating through them.

Then it could be the radiation pattern of the replacement antenna (while a higher gain) results in a "flatter" signal.

A low gain omnidirectinal antenna has a radiation pattern as shown on the left while a high gain is like the right side. These can also be turned sideways 90 degrees.

Here's the signal difference of the same antenna in horizontal versus vertical. In the vertical antenna example you could be right next to the antenna (top "v" outside red line) and not have any signal. 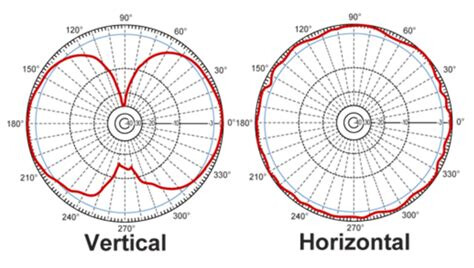 Try changing the horizontal/vertical orientation of the antenna.

Without a published pattern for the antenna in question we're just guessing. 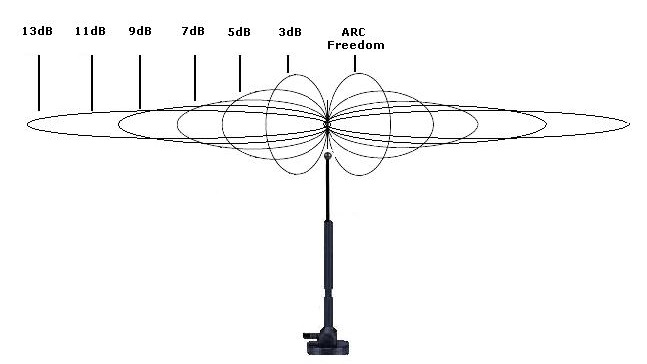 Without a published pattern for the antenna in question

This actually made it worse.
I’m wondering if its not getting as good of a connection as the stock antenna.

If your target devices are outside or bordering the redline on the right pattern you'll get a weaker signal.

This a a the lqi for my zigbee2mqtt system with the sonoff plus dongle (same as your repeater) but functioning as the coordinator and it is less then 6ft apart to an aqara vibration sensor.

This actually made it worse.

That's due the polarization of the signal, the signal waves coming from the antenna can be vertical or horizontal. and if the target device doesn't match your signal is weaker.

I’m only perplexed by the upgraded antennas downgrading the reception. I can stand here and see the devices I posted the lqi of. This is more a tale for others to read so they don’t waste there money. If I can figure out how to build the firmware for these I’ll see if 20db output helps anything. Obviously it won’t help the repeaters to hear better, but perhaps I can move them further from the hub to help weaker devices.

I also tried some of these various antennas including some panel type directional with the dongle and zigbee2mqtt and while I saw a increase in LQI (~20) for some devices, it wasn't worth it.

I have taken the approach of using more zigbee plugs. The third reality plugs are $30 for a 4 pack, that's half the cost of the sonoff dongle.

Thankfully I have plenty of repeaters. I was just toying with these to see what could be done. I like that I can put them in less conspicuous places and they still work pretty well.