hi. does anyone know why the PATIO LIGHT is stated as ON but it is really OFF.... they are setup to be turned off at sunrise... they work perfectly but dont know why it still appears always ON 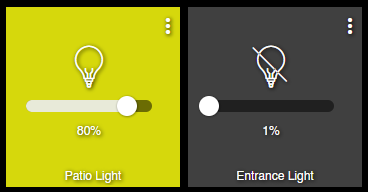 work perfectly but dont know why it still a

Another thing to consider: this is very unlikely to be a Dashboard problem and far more likely to be an issue with the actual device (on Hubitat). To be sure, look at the device page instead of Dashboard. Under "Current States" towards the top of the page, make sure that all values appear correct--notably, "switch: on" or "switch: off" for your specific issue. Dashboard should just reflect what you see here; if what you see here is wrong (but matches Dashboard), there is a different problem -- and knowing some of the above would be helpful to figure that out.

thanks, in the current states it shows ON

i asked alexa to turn it ON and it went off and inmediately off... and then i asked it to turn ON and then OFF and now it shows off on dashboard and current state.

the image was taken before that said.

but its been a few days that i have to click off on the dashboard just to avoid i dont know if causing a failure when later that day has to be turned on...