Is osram over here, or ledvance. Either way all the same.

This has been out in the community for a while, but I'm posting this as the official source for information regarding my RGBW firmware, App, Drivers, etc. Firmware https://raw.githubusercontent.com/erocm123/SmartThingsPublic/master/devicetypes/erocm123/smartlife-rgbw-controller.src/SmartLifeRGBWController.ino.generic.bin App Used to discover devices that have been joined to your Wifi network and to create user defined "programs". Programs give you the ability to flash and fade the RGBW color…

THIS is a reasonable introduction, it'll give you a good idea of what to throw at Google for more information at the very least

I have had good luck with WLED and a Dig-uno controller board from here QuinLED-Dig-Uno - quinled.info

I went with the pre-assembled version

I have the LIFX Z-Strips, integration to HE works great using the community drivers.

Any MagicHome WiFi-compatible controller will work with Hubitat using my driver set (currently only does power state, but more coming). I have them running around my house, and it's one of the few devices my partner actually appreciates

Thanks! Looking forward to future versions of the driver!

Right, unquestionably pricy, but as I said, working great with HE!

Not sure if it's possible to use them like the one in the video.
They have 8 zones per 1m strip, you can create custom color gradients and do a simple color moving, that's all I can tell about them.

Thanks. I just think it was really cool. Maybe I will get tired of having it (too much like an amusement park) after a while, I don't really see the use-case in my case.

Hey guys. Wondering what LED strips and controller you are using. I have some Gilderwell ones from Amazon which work fairly well, just wondering what else is out there that intergrates well

I am exploring this area right now as well and looking for some good options. There is lot of US-based recommendations, a lot of them not available in the UK, so would be keen to hear about your experience.

I love my inovelli light strip. Pricy, but worth it. It has buttons on it so you can program them as scene controllers too. It in my sons room, and have it set when he pushed the up button 3x it makes his light strip and hue bulbs turn red and blue. He uses it when his sisters come in the room.

Im a big fan of these LED strips, really great quality light that does make a difference to the feel of the room compared to cheapo ones. I have some RGB strip aswell, but actually installed this in addition and now always use this instead (perhaps I'll use RGB once we're allowed to have a party again). 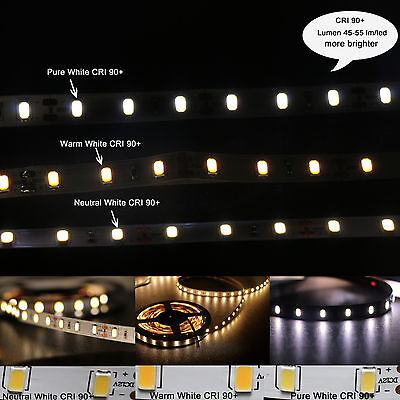 I combined them with an H801 which works super well and a standard 12V power supply which can be ordered from amazon or wherever quite easily. The only good off-the-shelf ones that Ive found in the UK are Hue strips, but again you pay a premium for them! (though it does take away hassle/setup faff, if you want an off-the-shelf product).

@cjcharles -- these look great! I am a bit overwhelmed about how all the other bits (controllers, power adapters, etc.) fit together to provide the overall solution. Could you share a couple of links to the controllers / power adapters that you are using with them? I swear it's not my laziness, just not wanting to get stuff that is not compatible with each other...

Can you say a bit more about your use case?

What length of strip do you want and for where? Is it just the one strip? Do you care about colour? Or how about colour temperature (e.g. changing between warm and cool white)?
(mainly because I'd probably recommend an off the shelf option for a shorter strip, or one where you want full colour aswell)

This is a link to the H801 controller, though would need reflashing with a different firmware to integrate locally (easy to do, but its an extra step, and maybe not worth it if you just want one) - H801 RGBW WiFi LED Controller for RGBW led Strip Light tape DC5 24V input;4CH*4A output|RGB Controlers| - AliExpress

What length of strip do you want and for where?

Is it just the one strip? Do you care about colour? Or how about colour temperature (e.g. changing between warm and cool white)?

White only. Colour temp is a nice addition but not a requirement.

This is a link to the H801 controller, though would need reflashing with a different firmware to integrate locally

Yes, this controller appears to be WiFi, so I'm assuming that's what you are referring to -- the need to 'reprogram WiFi to Zigbee'..?

The H801 comes with firmware that is closed source and Chinese written so I inherently don't trust it... Reprogramming it just means it runs different (open source) software (I even partially wrote some of it), but still sends/receives messages with Hubitat via WiFi. This is an option with higher customisation, but more complexity as a result. There is a huge thread about it on the ST forums here and covers the flashing process - Or here for Hubitat setup

Or some IKEA Trdifi (or something like that) strips - would work out somewhere in the middle pricewise (probably still a single colour, slightly less customisable but easier setup than with H801s)

@cjcharles -- this is a brilliant comparison and neatly shows the trade-offs between price and convenience. I will need to give it a bit more thought and decide if I have the energy to go the DYI route. Thanks again!