I was wondering if anyone can share some sources as to where to buy smart switches and sockets. It seems that anything reasonable price wise is for alexa or google and not designed to work with a hub. I wonder why manufactures appear to be moving away from z-wave, zigbee, etc.

Any suggestions much appreciated.

I am in the US. Also can anyone suggest a good

Wall switch and motion sensor that works with Hubitat well?

Amazon, homedepot, lowes and redflagdeals sometime have great deal on smart home devices. Just have to keep an eye on them or you can subscribe to redflagdeals for smart home or camelcamelcamel for Amazon.

Basically, any ZigBee or (especially) Z-Wave device should work with Hubitat. You can check the the official and community list of supported devices, or search the forum (or ask) if you're not sure. A lot of LAN devices also work, but generally only ones with an open API like Philips Hue (if you use the Bridge; ZigBee bulbs can also work directly with the hub, though I wouldn't always recommend that), Sonos, and the like.

Personally, my favorite motion sensors are the Iris v2 motion sensors, though others have reported the new v3 Iris sensor also works well (and the v2 has probably been discontinued and will only be harder to find). The "new"/2018 SmartThings Motion Sensor also works well for me. It's bigger but does have a mount--Iris has tape tape or needs a "set on a ledge"-type (or "make your own mount") situation.

For in-wall switches, you have a lot of options. Inovelli is generally well-reviewed but currently mostly out of stock. ZooZ is similar and may work well, plus there are a few options from HomeSeer and lots from GE (make sure you get their Z-Wave Plus models, not "regular" Z-Wave, if you go that route). I have a HomeSeer switch becacuase I like the LED and wanted multi-tap for different "scenes," the latter of which Inovelli and ZooZ also support (and you won't need an expensive add-on/companion switch for the second location in a three-way with those). If you think you'll have a ton of switches or if this just sounds better to you for whatever reason, you might also look into Lutron Caséta with the Pro Bridge, which will give you that plus the ability to use Pico remotes (with or without hardwired switches) anywhere--Hubitat's integration is really neat.

Most switches are Z-Wave, but there are a few ZigBee (GE makes one, I know) available. There are both Z-Wave and ZigBee motion sensors, but I think most ZigBee sensors work better (or at least they're faster, and I'm using most of mine for lights, so it matters). If you have a large house or devices far away from the hub, you may need to plan to have powered/repeater devices between the hub and your "end" (battery-powered) devices, which I mention only because ZigBee and Z-Wave form their own mesh networks and may need "extending" if you're far away (or in the case of ZigBee have >32 devices). Some people like to stick to one protocol; many, myself, use a mix of both, depending on the device. Hubitat supports and ties them all together so it doesn't really matter much beyond that.

As for where to buy: besides the Iris products at Lowe's (and non-Iris products at similar hardware stores), you can find a lot of these devices on Amazon, TheSmartestHouse, and similar sites, often also directly from the manufactuer's/seller's site (HomeSeer, Inovelli, etc.).

I wonder if Hubitat wouldn't benefit from selling (or suggesting) a "starter kit" like another platform does to make this easier for brand new users.

I am a creature of habit, so I have all GE switches in my house. Including smart fan switches. The colors vary from model to model when you use different brands. Gets OCD going otherwise. I usually buy them on Amazon. It really depends on what you want to automate. If you like motion sensors, I use the xiaomi motion sensors, but others have had troubles with them. Mine have been rock solid, so it's at your own risk. They're cheap and effective and work great with HE. Since they ship from China, they take a while to arrive.

If you're starting out, the first thing I would advise is to map out what you think you might want as far as switches/remotes. If you think you might want a lot of remotes/switches in places that don't have them now, you might want to look at Lutron Caseta. The switches/dimmers are a little more expensive but you can't beat Pico remotes for versatility. And they will all match, which can be irksome to some people in multi-gang switches. As far as having everything match throughout the house, if you aren't going to go with something like Caseta that has a unique faceplate, as long as all the switches within a single switchplate match, unless you have SUPER anal retentive quests, no one is going to even notice that you have a different model switch in one room to another. If they are right next to each other, they are noticeable but not so much that you would be able to tell from one room to another.

Sometimes there are good deals on used equipment as well. For instance, I'm going back and ripping out my paddle GE zwave+ switches and dimmers and replacing with the GE zwave plus models that also have motion built in. So will have a dozen or so of those available soon.

You don't mean wallplate/cover, do you? Caséta fits in a standard decorator plate, including in multi gang boxes, though Lutron does heavily push their own. If you mean the appearance of the switch itself, that is, of course, quite different from any other (though I don't happen to think it looks bad next to any other kind).

As for the switches in general, I agree: Z-Wave toggle switches look a bit different from regular toggle switches, and paddles do too if close (neither stays up or down, both middle, but it's far more obvious with toggles). But most brands of smart switches look pretty similar. I even have a HomeSeer LED switch next to a regular paddle and they look fine together. And I added a Pico to that plate so it looks like a three-gang (the Pico is really just wall-mounted) and I still don't mind.

But even the most OCD of people should be fine mixing in at least the same room.

If you mix types of smart switches, however, my real question is whether you want to learn all of their idiosyncrasies--i.e., how to reset if needed, what parameters/options they support, if/how they work in a three-way setup, and so on, for each.

Try staying away from Z-wave and get Z-wave plus instead. I remember @JDRoberts tried to convince us with Z-wave plus over Z-wave devices at least 3 years ago and I didn't think it was such a big deal. Well... I am replacing them now. Range, response time and status are much better with plus.

hehehe.. my wife says similar: "Why didn't you buy the right one? I told you to buy..."

Answer, always: "I bought what they had to sell. If they don't stock it, I can't buy it."

You don't mean wallplate/cover, do you?

No, I mean faceplate as in it doesn't look like a regular decora style switch. 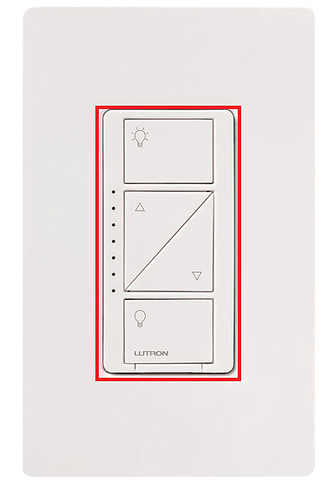