I've been trying to simplify my set-up by moving as many Rule Machine Apps to Room Lighting, on the assumption that this will be easier to maintain and reduce any processing load.

All have worked fine except one! I use a Virtual Device within HE as a trigger for both Alexa Routines and HE Rule's. The state of this virtual device used to be set by a Rule but I can't get Room Lighting to work, The trigger is not working in a dependable manner - sometimes works other times not! The trigger is when Illuminance drops below 10. The Rule Machine App is as follows:

If I try and reproduce this in Room Lighting the App fails to fire consistently - I've deleted it now but can easily reproduce if needed. Has anyone got a Room Lighting App to work with this type of trigger?

I don't think you need that existing virtual device in Room Lighting. Wouldn't you just use the following option instead of your virtual switch? 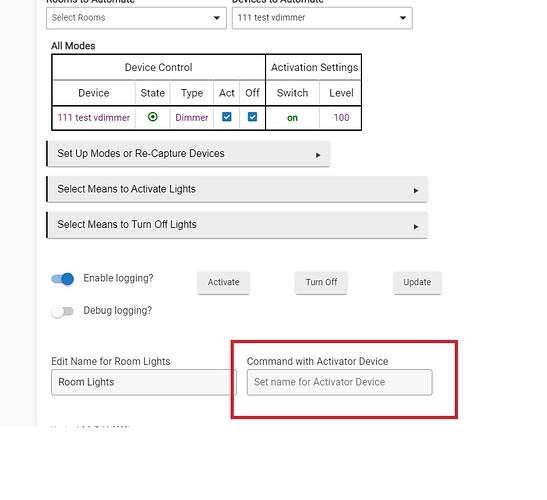 The reason I use the Virtual Device is because I want either Alexa or HE to be able to control these lights and some are wi-fi smart plugs that HE is not aware of.

But that option I circled IS a virtual switch. You expose it to Alexa for voice commands and you can reuse it as any other virtual switch in other rules if you want to.

I was under the impression that you couldn't use that as a trigger for an Alexa Routine?

I don't know what to tell you except it works for me, and the documentation expressly mentions it. Room Lighting - Hubitat Documentation

When a name is entered in the Control with Activator Device field, Room Lights creates a special child device called a Room Lights Activator. Such a device can be used with voice assistants,

Sorry, I wasn't questioning your advice, just stating my misunderstanding!

So I'm still getting inconsistent behaviour with two Room Lighting rules. I don't think the solution that @neonturbo has mentioned previously would work, as I don't have any physical devices installed that I want the Room Lighting App to control. These devices are within my Alexa account but I like to keep my logic within HE for consistency - hence the use of a Virtual Device to act as a trigger within Alexa. I have two Rule Machine Apps that control these devices 100% of the time but when I use the Room Lighting App, it triggers the first time but subsequent triggers are inconsistent. As you can see in the Settings of the two Room Lighting Apps below, I've tried to 'Force' the activation, in case a state issue caused the trigger issue but that has made no difference. 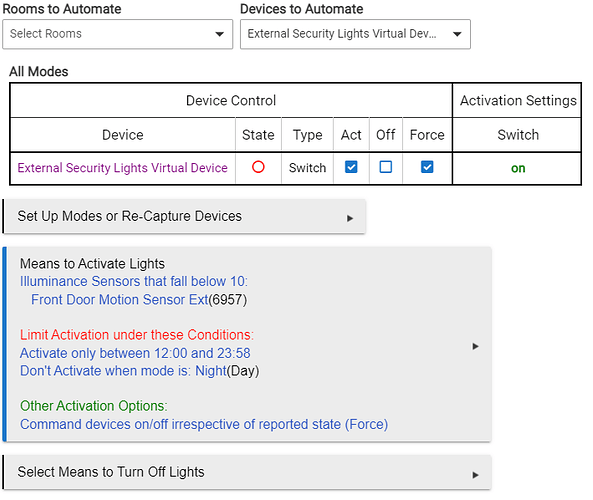 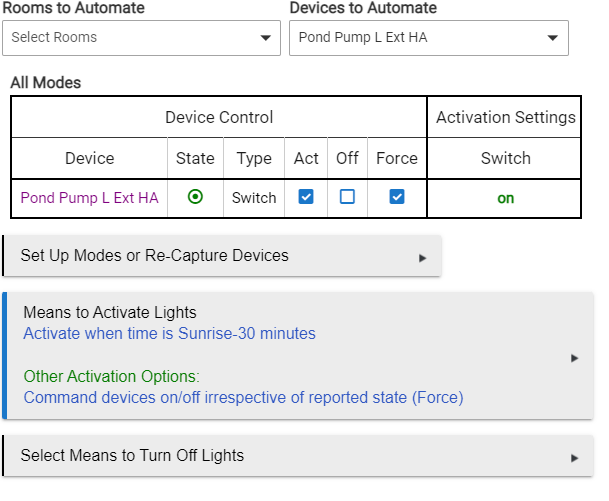 I just can't understand why the Rule Machine logic works but the Room Lighting App doesn't!

(I have an End of Day Rule that controls the turning off of these devices in various scenarios depending upon the Mode set.)

I'm copying in Bruce for his input (@bravenel )

Best if you look at the Logs. The app will explain in the logs what it's doing.

So I think the problem is that I'm turning the lights on with a Room Lighting App but turning it off with a Rule Machine App. This leaves the Room Lighting App as 'Active' which then stops it from turning the switch back on when subsequent triggers are run. I've created an Activation Device and turned that off as well but the overhead is greater than my simple Rule Machine App, so I've reverted to that and deleted the Lighting App.