Is there a way to cycle fan speed up or down depending on button?

Is that even possible? Thank you

Edit: if it matters the fan is though the bond integration 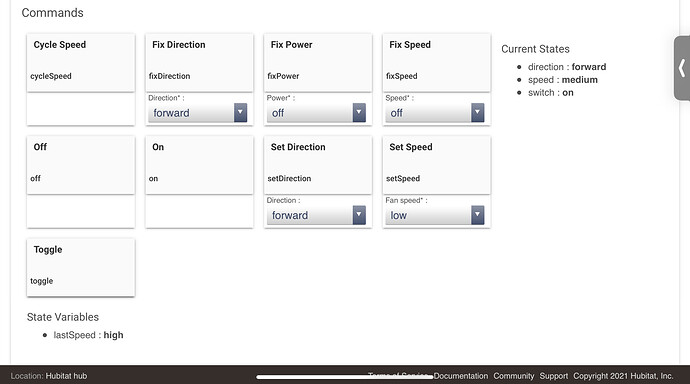 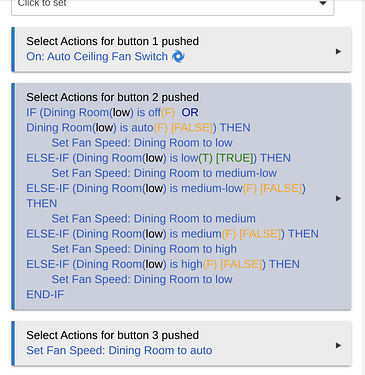 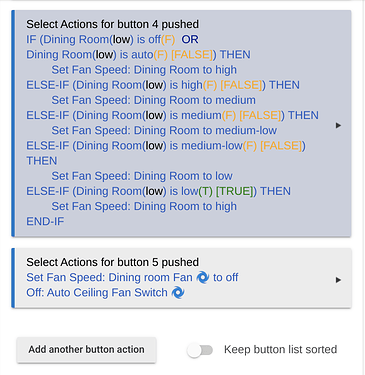 Probably, if bond can send discrete speed commands to the fan, which from your screenshot it looks like it can.

Buttons 1, 3 and 5 are straightforward, since they’re always going to be the same command. It’s 2 and 4 that need IF statements.

I don’t live in the same house anymore and that hub isn’t currently active, otherwise I’d just share a screenshot of the old rule.

But to increase the speed by one setting each time button 2 is pushed, the actions would be something like:

Thanks, what’s auto? I saw that on mine too

Mine is a hampton bay zigbee model so auto is "breeze mode" it randomly cycles through the different speeds.

Thanks, I’ll try this for my in-laws fan

I think I’m going to attempt and app to do this (with my brothers help) . Theres an app for light dimmers

My button controller doesn’t have conditional

It depends which version of the hub firmware you have. The function is either in rule machine, or in button controller.

The new button controllers 5.0 should. Or rule machine if you are running an older version.