How do configure them in the main device preferences?
I see the Child Devices section under preferences but can't figure out what it is asking for there.
I have both drivers installed (Main/Child). What do I do to get the buttons to show up?

I'm sorry, I need some help in understanding what you are asking. Do you need help with setting up the LED notification child devices or using the switch as a button controller, or both? Happy to try to help!

If you are installing the Red Series switch, you'll need to use

The driver you posted above is for the prior model of Inovelli's scene switch.

Thank you VERY much!

Is there a way to have the down buttons be their own button instead of "held"?

I just made a quick modification to the driver that does this. I made taps 1-5 up be odd button numbers (1 to 5 taps are buttons 1, 3, 5, 7, and 9 pushed), 1-5 taps down even button numbers (buttons 2, 4, 6, 8, 10 pushed), and the config button number 11. All buttons except 1 and 2 support only (or to be clear, are reported as) pushed. This eliminates the "held" workaround but requires a small amount of "button math" that is not uncommon for this type of switch.

For the up paddle, you'll get button 1 pushed if you tap it, or button 1 held followed by released if you hold it down (and release it). Similar for button 2 with the down paddle. Apparently, the "release" Z-Wave message was a firmware accident, and their official driver doesn't do anything for this, but I hope they keep it. This makes the switch usable to me with the relay disabled to control smart bulbs and get smooth dimming via startLevelChange and stopLevelChange.

No guarantees that this will work with other firmware versions, but this works for me on the current Red switches: https://github.com/RMoRobert/Hubitat/blob/master/drivers/inovelli-switch-red-series-lzw30-sn-advanced.groovy

EDIT 1: I no longer update the above driver, instead I've now switched to using my further revision: [RELEASE] [Deprecated] Inovelli LZW31-SN Drivers with Child LED Devices

EDIT 2: I have heavily revised/rewritten the above driver and no longer maintain the v1 version of it either; I have a v2 in my GitHub repo but have not made an official "release" thread for it yet. Inovelli's provided driver has adopted many of the features I added to my v1 driver, and Hubitat still offers a built-in driver if it meets your needs.

The same button-event mapping applies as above, which is different from Inovelli's own awkward use of event names but consistent for at least single presses with how Hubitat numbers and names the events. This one also optionally creates child devices for LED that can be manipulated using mostly standard command, like a smart bulb (instead of needing to pre-configure notifications in the parent device, just tell the "child notification LED" device to set itself to yellow and start the "fast blink" light effect, for example).

I also added a setIndicator command to match what Hubitat does on their provided drivers, which will set the notification LED to the calculated parameter value if you prefer doing it that way instead.

@bertabcd1234 Oh man, thank you so much for this code. I spent over an hour trying to get this switch to work as buttons, and nothing was working. Inovelli claims that their driver enables the different buttons in Hubitat, but it doesn't at all. I then tried 3 different custom drivers before finding and trying yours, and now it is working (almost*) flawlessly. Thanks so much for sharing this code.

Is there anything that actually limits the number of buttons this could be? Could [anyone] add additional lines of code for 6 taps or 7 taps?

*I set hold up and hold down to turn on and off all the lights in the house. Sometimes, after holding, if i then go to tap up or tap down to control the light connected to the switch itself, it will toggle the relay, then toggle right back. It only seems to be doing this maybe 10% of the time, so not sure what the issue is.

So if I hold down to turn off all the lights, then wait a couple seconds, and tap up, the switch will click on, then immediately click back off. It's done it the other way too (turn this light off and it turns it right back on)

Thanks again, this code is what I was expecting to get from Inovelli.

There is a limit on taps: the driver isn't doing anything special to count these, the switch just reports it on its own (via Z-Wave scene and key numbers). There's no way to increase that with the driver. (You can sometimes fake this with some success by counting button presses, usually with buttons that don't already support multiple taps or the device's own delay to make sure you aren't multi-tapping will make this worse, but Hubitat takes a bit of time to process these events and it won't be as smooth as the device natively supporting it.)

I haven't experienced the problem you mentioned with the relay. I assume you have the local control parameter set to disabled? I didn't play around with this much but don't think the driver should affect that. Can you get that to happen with the original driver, too?

@bertabcd1234 I don't have local disabled, because this is controlling an actual lighting circuit, and we want it to still control the circuit if the network goes down.

I am having a little trouble with automating using the different buttons (I can't share them to other Apps like Alexa), I don't want to take over this thread though, should start a new one, or just PM you?

Ah. I have local control disabled on mine. I'd assume a hold down should not cause a subsequent tap up to turn (on and then) off the relay, so I'm not sure what's going on. You might try posting on the Inovelli Community forums to see if anyone has had a similar experience.

As for buttons, that's normal: the Alexa API does not provide a way to expose buttons. It can expose switches, but only to control them. They can't be used as "triggers" in an Alexa routine. For that, you'll need an awkward workaround like a virtual motion or contact sensor (all Amazon lets you use at the moment). I hinted at these workarounds in another thread (Alexa Skill does not support SmartThings button), and perhaps a search will reveal more if you can't figure it out based on the general description others have provided so far (but I'd also be happy to help).

Well the dimmer showed up today. So I can say both their products are real. Have not installed it yet since the room it goes in is still missing trim and it final paint.

Thanks again, this code is what I was expecting to get from Inovelli.

I'm a tad confused here. Are you saying you didn't have scene control with our driver?

Sorry, just trying to understand bc there have been plenty of people setup scenes with our driver.

I'll also admit that a lot of what @bertabcd1234 did is way above my pay—grade! Thanks for the modification!

I have the Dimmer. I would like to set a rule up to set the notification light to a certain color? Also do you need the child device for the dimmer?

@Eric_Inovelli I just installed 2 of the new Red Series Dimmers (LZW31-SN), and unless my reading skills/comprehension utterly failed me (certainly possible) the links in the instructions for Hubitat point to the LZW30 drivers (on this page under Hubitat: https://inovelli.com/shop/smart-light-switches/zwave-smart-switches-gen2/z-wave-dimmer-switch-no-neutral-required-scenes-notifications/#installation-instructions)

Took me awhile to figure out what was wrong...when I first set things up, my assumption was that the driver was for both models.

Long story short, after an hour at panic stations with my WAF predicted to take a nose-dive, I found the LZW31 drivers on the Github, and all is well.

For others with similar confusion: Hubitat/inovelli-dimmer-red-series-lzw31-sn.groovy at master · InovelliUSA/Hubitat · GitHub

The dimmers, even in basic configuratio have a HIGH WAF by the way.

Whoops, my bad -- just trying to keep you guys on your toes!

The link has been updated -- thanks for catching it for me

The dimmers, even in basic configuratio have a HIGH WAF by the way.

So, by HIGH WAF, do you mean there's still a ways to go for her to accept it? Or does it mean even in the basic setting, she's excited about it haha?

Anyone know how to set the notification led from rule machine?

Have any of the older drivers been updated to include an option to disable debug logging? I'm getting unnecessary logging for my NZW97 and NZW37 2-channel plugs.

I also picked up a few 2-port 1 channel NZW96 refurbs that have reportedly shipped but haven't looked at that (loaded) driver yet.

P.S. Can't wait for the LZW31 to be available. I have exactly ONE location I need a paddle dimmer that doesn't have a neutral. I don't want to resort to using a Lutron flush button dimmer.

Sure do, when you set all 4 options for a notification "color, duration, intensity, effect" a child device is created for that notification. (make sure that the switch-child-device is installed from our github).

You can then control the child device to turn on / off the notification in rule machine.

@rjterry21 I do have it on my list, but I'm not sure when I will have a chance to get to it. If you do a find and replace in the driver for 'log.debug' to '#log.debug' it should comment out all the logging for the device.

I already searched for "debug" and found nothing. Not finding log.debug in parent or child drivers.

I do see log.debug in the Zwave Association Tool app code. 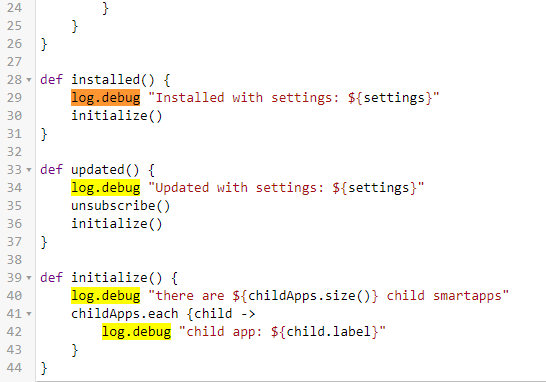 It's one channel triggered in RM4: