I have been using Echo Speaks in ST V3 and like the capabilities. Since I'm converting to Hubitat I wanted to understand what options are available. I thought I saw that Code Red could initiate alexa to saw things, and of course there is the Echo Speaks as well. What are the trade offs if these are the two options?

On that same vein, I thought Webcore used Echo Speaks to make Alexa speak. Does Rule Machine allow the same sort of capability or would I need Webcore?

I thought I would just suck it up and use Rule Machine instead of Webcore for my Hubitat but I would like the ability to make alexa say something, One of my use cases is I have a probe that is in the lake we are on that has alexa announce the temperature in the morning, and also when I ask what is te lake temp it lets me know what it is.

Any guidance on these thoughts?

I don't use Node Red so can't speak to that, other than that one tradeoff is that you need something to run Node Red on (you need a server to run it on, but a "server" can be something as simple as a Raspberry Pi at home). Echo Speaks actually has to be run on something, too, but the installation instructions provide directions for free cloud hosing on your own Heroku setup, though there's nothing stopping you from hosting that elsewhere (including home) if you know how. If all you want is TTS, AlexaTTS is a much smaller app (no external hosting requirements, though you can add an external script for cookie refresh if you want--these are all unofficial options that need some extra work because Amazon doesn't officially support this).

To initiate an Alexa Routine from Hubitat, you technically don't need Echo Speaks, either; there are natively supported ways to do this, like exposing a (virtual) motion or contact sensor to Alexa and (virtually) making it active or open on Hubitat and setting your Alexa routine to trigger based on that. However, some people don't like the extra virtual devices this requires. To do TTS alone, you technically don't need any of the above options, either--this virtual-device workaround works for that too since Routines can do TTS. What you can't do is speak arbitrary text, only whatever you've configured in the routine. So...back to one of those options if that's not what you want, which it sounds like you may (unless Amazon added temperature-sensor-speaking ability recently? I haven't checked).

For TTS, the webCoRE vs. RM distinction doesn't matter. Once you get a TTS device into Hubitat, any app capable of working with that device can make it execute whatever commands the device supports (if the app can send them, which webCoRE and RM are both customizable enough to let you do). Either would work just as well. RM is built in, but webCoRE isn't too difficult to install. "Standard" apps like the Notifications app may even work. I'd start with that or RM personally, but just about anything could work.

I'm in the process as you. Today I got all my devices loaded into Hubitat. Got Webcore Installed, and played with Rule Machine a bit. So far I'm finding Webcore to be much more reliable and powerful then RM.

Hopefully tomorrow I set up Echo Speaks, and get my devices talking again. I'd like to see if you run in any issues or if I do as well.

I'm still on the fence on my direction for automations. I don't mind the cost of using something like an RPi (or a third C7) to offload work from my hubs. I think I'd explore offloading webcore and Echo Speaks somehow. My primary issue with ST was the response lag for lights and wanting more control of my future with what products I used. I particularly like the breadth of community drivers with Hubitat, they were the first thing I worked on and have a number of devices that are much more elegantly included in my network than with ST. The Zwave inclusion issues are discouraging, but I expect them to go away with s/w updates. I initially thought I would be off ST but am now rethinking this, I've gotten HubConnect running on a V3 ST hub with the new ap and two Hubitat hubs. This may be the way I include Arlo, Spruce Controller and a few other outliers.

I would love the ability to send Alexa commands directly from HE, since that was a feature we enjoyed back on the ezlo (using EzloVOI™) and Vera (using a custom plug-in) platforms. May seem trivial until you've tried it, but with a "conversation" UI at your disposal, it's possible to ask Alexa questions or directly command her to perform functions from your keyboard. Further, in the context of a purpose-built User App, it should also be feasible to capture her response to be saved as a Variable and/or form a Notification message.

I've explored the list of HPM apps and don't see anything remotely like this, and I'm not talking strictly about TTS or music. Here are just a few example of what I mean:

Typed command (in UI or an RM action):
"What is the weather in 90210?"
or
"Tune in WFUV on Kitchen"
(all without having to speak these phrases out loud myself ... comes in especially handy for routines you want executed in the middle of the night!)

Echo Speaks can do this, and I think you can also do it using Node-Red.

Echo Speaks has this command: 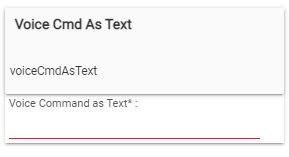 Ah, sweet, I will definitely check that out. Funny, the old 3rd party app I used to use on Vera was called Alexa Speaks, I believe.

I figured by now something along these lines must exist, yet hadn't heard a peep from anyone actually using it. Another reason this is important to me, is that certain commands on Alexa only work reliably when spoken, and there is not corresponding switch or Routine that can do it natively (such as turning off the screen of an Echo Dot).

This will be super helpful if I can get it going. THANKS! (I was mistakenly searching for the keyword Alexa instead of Echo in HPM, which explains why I couldn't find it efficiently earlier.)

UPDATE: Installed, and figured out that it's essentially a Device Driver, and even created a device based on it already. But will have to consult DOCS to understand how it operates... until tomorrow!