The gist of my question is I'm wondering if there is a better way to use the mobile app (iOS) for local access to my dashboard as soon as I arrive home.

I use my dashboard to unlock my back door regularly right when I've parked my car and am about to head inside but I'm frequently blocked from doing so. I presume the problem could be related to the app lacking sufficeint time to process that I have arrived home and am inside my geofence. I say processed because I've actually tried to wait before opening the app and tapping on the dashboard icon until I'm connected to my WiFi and even opened the app and confirmed it accurately registers me inside my geofence before tapping to access my dashboard. But I'd say 99% of the time the dashboard opens showing that I am not at home so if I go to unlock my door as soon as I get to my dashboard it throws up a very terse 'Cloud Access is Not Allowed for this Dashboard'. So I have to force close the app and reopen it and pay close attention to whether I get a white cloud or a white house before impatiently clicking to unlock my door.

My eyes are not what they used to be nor is my patience so it seems to take way more focus and concentration to access my local dashboard from the ios app than it should...

Anyone have any good ideas on how to get the app to open my local dashboard instead of presenting me with remote acces in this all too frequent scenario? New eyes aren't really an option and I wish I was always distraction free when maneuvering this gauntlet but life happens. Also, I don't fancy the idea of offereing up the lock on my door to be accessed remotely.
And for what it is worth, I have a Shortcut that opens the Hubitat mobile app as I roll up on my house so that's a wrinkle perhaps...

Absent some sage advice from this impressively knowledgable community I'd just make a simple request if the app is always just going to open up as if I am not already on my home WiFi (...remote as opposed to local...):

I'm just spit balling here to hopefullly spark an idea that is actually practicable and/or less poorly conceived than my hypothetical suggetions I have chucked at the wall like wet spaghetti to see what sticks (to mix my metaphors).

Appreciate any thoughts anyone might have on my little predicament!!!
-Thanks

There is a setting that you might have set to block remote dashboards. Go to Apps, Scroll down to Hubitat Dashboards app, and pick the dashboard for this door lock.

Go to the bottom Advanced section. Click on that Advanced header, and there are some selections there that I bet are not set to allow remote dashboards. 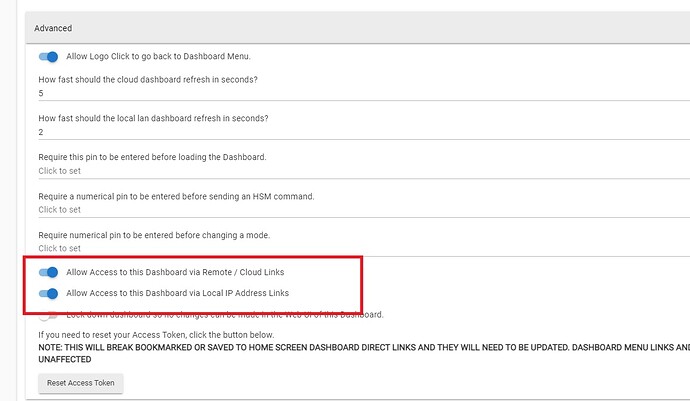 It seems OP doesn’t want to have a door lock available on a cloud-exposed dashboard. It’s a theoretical risk, but not an unreasonable concern I suppose.

And for what it is worth, I have a Shortcut that opens the Hubitat mobile app as I roll up on my house so that's a wrinkle perhaps...

This might not be helping. How is the iOS shortcut triggered? When you cross a geofence or when your phone connects to WiFi?

One other option to consider would be to open the dashboard in a safari browser tab on your phone and save it as a bookmark to your Home Screen. Then each time you get home, with a single tap, you can bring up the dashboard as a progressive web app.

Come to think of it, you might try creating an iOS shortcut that opens the dashboard link directly, rather than opening up the Hubitat mobile app. The dashboard section of the Hubitat app itself is just a wrapper for the dashboard webpage. As long as the iOS shortcut triggers after your phone has connected to wifi, this might be the best work around for you. I can’t guarantee this option will work the way I’m suggesting, since I don’t make much use of iOS shortcuts myself, but it seems like it should?

do you have high accuracy turned on within the hubitat app?

I strongly recommend against using the high-accuracy presence option in the iOS app. In my experience (with more than one generation of iPhone and version of iOS), it’s an absolute battery destroyer.

That said, there are a couple other options in the mobile app re: presence that, in theory might help. “Validate location on network change” comes to mind. But I have that option enabled, and haven’t really found that to be hugely helpful, since as @rlithgow1 mentioned, many people have found the app’s geofence triggering to be somewhat lackluster overall I believe it’s a byproduct of the way the app detects presence, which is designed to maximize our privacy as users (unlike many other apps it’s not actually tracking your location at all times), but that’s just my theory.

Could we have an accessiblity option that could allow one to deviate from the color scheme of the app to make it exceedingly clear that the little white cloud is not the little white house?
-- Different color icons maybe?
-- Spreading out even further the spots where the icons show up on the screen maybe?

@moncho1138/@bravenel please see OP’s request re: iOS mobile app accessibility considerations for users whose visual acuity makes it difficult to distinguish the cloud/home icons at the top of the dashboard page. See my screenshots below in case it’s not clear what I’m referring to. Thanks for considering.

One thing that always confused me, is the cloud symbol mean you are on cloud or does it mean hit that to select cloud? And vice-verso the house symbol.

strongly recommend against using the high-accuracy presence option in the iOS app. In my experience (with more than one generation of iPhone and version of iOS), it’s an absolute battery destroyer.

Agreed.... Was just wondering. Ios is notoriously sleepy. That's the only reason I mention it.

One thing that always confused me, is the cloud symbol mean you are on cloud or does it mean hit that to select cloud? And vice-verso the house symbol.

Cloud showing means your on cloud. House means you're local.

I am home now. Debug shows within geofence. But cloud icon is showing. I can click on the cloud icon, the house icon shows up. I can open a dashboard. Close the dashboard and it goes back to the cloud icon. Which therefore seems backwards.

EDIT: I think what I mean is it should default to local when home. And it is defaulting to cloud. Won't stay on local for some reason.

I have always found the app's ability to automatically switch between local and cloud version of a dashboard to be erratic.

It occasionally has worked for me as I assume it's intended to, but mostly it has not.

Wow. This is extremely helpful. Thank you all for your thoughtful input.

How is the iOS shortcut triggered? When you cross a geofence or when your phone connects to WiFi?

I already have an icon on my home screen to open my local Hubitat webpage for general use but I never considered that the dashboard would have its own page that I could use the same way. I do recall that there is something in the dashboard parent app that allows for certain types of links. I just never put these two ideas together. Definitely going to try this one!

I am willing to give this a shot. I have a UniFi setup so looked at the UniFi presence sensor a while back but I didn't get it configured correctly and then stepped back and saw there were multiple apps that individuals have created. And then the analysis paralysis overtook me and I sort of let it go. I assume the presence sensor you note has worked well for you so I can try and get this one configured as I would also like to set up other automations with conditions or triggers based on presence.

Thanks again for these great ideas and suggestions!

@iharyadi 's sensor is zigbee and has really good range. (Several blocks for me)