I can't find it on the FCC ID page for IKEA devices, but it's ZigBee 3.0 certified:

The reason why there might not be specific entries for all these new TRÅDFRI smart home devices on the FCC ID website is that they may all be using the same RF Module, which supports ZigBee, Bluetooth LE, and Thread wireless protocols:

Okay, once I pick one of these, I'm going to sacrifice it to the "Dremel Gods" and see if the link to Xiaomi can be found within its innards.
Or do we already know without cracking it open?

Expecting that might happen in the future. I don't think these are Xiaomi, but there may be cooperation in the manufacturing. There's a partnership between Xiaomi and IKEA for software only at this point, and only in China. There are some photos of the outlet innards and it does not appear to be manufactured by Xiaomi either.

There's a partnership between Xiaomi and IKEA for software only at this point, and only in China.

From the press release, it sounds like Xiaomi is going to allow IKEA smart home products to join in the existing Xiaomi IoT ecosystem. In other words, an IKEA device could be paired to a Xiaomi hub.

Yep. I'm assuming that is just a software limitation, but you'd understand how that works better than I. I'm guessing that partnership together with the engineering and manufacturing prowess behind Xiaomi will result in more down the road, but just guessing.

I got one of these yesterday, it wasn't clear from the photos on the IKEA site but it's a pretty neat device because the power socket part is actually separate from the repeater part.

It means you don't have to use it with the power socket itself, any 5V USB power supply would be fine. I plugged mine into a convenient USB port on the back of a TV screen (one that doesn't lose power when the screen is on standby) using a USB extension lead to position it in a good location. 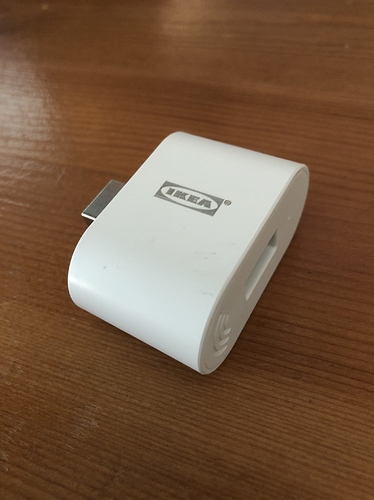 wow! thats a game changer for me. You could hide these anywhere! Only reason I havent bought one was I couldnt picture it sticking out of a receptacle they looked very bulky as a whole unit.

@martyn - you've got an XBee, and some Xiaomi / Aqara devices, right?

So you know what my next question is....

Yeah... If they work w/Xiaomi devices I'll be buying a few. Much smaller than the Tradfri outlets.

The only "problem" that I have with XBEE mapping is that it only really gives you a point-in-time view in my experience.

By that I mean that my ZigBee network never seems to stay static and is constantly changing over time - I believe that this is normal, standard behavior with end devices moving between routers as long as the 16-bit address doesn't change (because that signifies a leave and re-join).

There doesn't seem to be any pattern to how devices move, nor any discernible trend in how an end device chooses a router.

For example I have an Aqara door sensor on the door of the cabinet that the Hubitat is in - when I joined that device it joined direct on the Hubitat because it's less than a foot away from it, but over the coming week it moved around between various routers before it finally settled on an Aqara light switch in the kitchen on the other side of the house. During this time the 16-bit address stays the same.

In fact it seems that the Aqara end devices all eventually gravitate towards the Aqara routers (I have two Aqara light switches). While it's obviously anecdotal evidence only, I can't explain it any other way ..... there are Aqara sensors on the other side of the house, in the garden, etc, with many other alternate router devices available and yet they all seem to be drawn to the Aqara routers in the end.

I've also noticed that my Hue motion sensors will go through several days of moving around AND leaving / rejoining after I've made a change to the network by adding one or more routers. They will eventually settle and stay attached to a particular router after some time.

I suspect (based on what I've seen) that whenever they detect a change in the network that they may do some sort of self-optimizing and move themselves around to work out what their best router is to use.

Although some of the choices still don't make sense logically, for example there's a Hue motion in the garage that starts out being paired to a Salus socket also in the garage. Following a leave / re-rejoin dance over the course of a week or so around all the routers it eventually settled on a Salus socket in one of the bedrooms, several rooms and brick walls away ..... no idea why that's deemed a better router than the Salus socket less than 2m away from it that it was originally joined to! After that, it sometimes moves to an XBEE in the dining room (without leaving / re-joining) but mostly stays on that Salus socket in the bedroom.

In any case it's probably a little too soon to judge if the Ikea repeater is useful or not, I'll need to leave it for a few weeks and report back once things have settled down again!

The manual says that the device only has a transmit power of 3dbm (2mW). Compared to the max ZigBee device transmit power of 20dbm (100mW) this seems lacking. 20dbm would allow for 6-7 times the range of 3dbm. Its probably better to use a regular zigbee device to extend the range.

Yeah, I have two of them (so far). While they may be small, they are great in areas where you don't need a full repeater (like a bulb or a plug or a switch). I've found that having one of these in the farthest corner of my guest bedroom, a light that is in there isn't nearly as flaky as it has been in the past. Plus, it has the added benefit of being a USB charger, which my guests always seem to forget when they come over.

One thing we never, EVER seem to have enough of in my house is USB chargers.

Interesting, and it looks like the Trådfri outlet manual says the same (EDIT: nevermind, that's the button). I think that level of transmit power is usually found in battery-powered devices, so it's not necessarily terrible (they still reach the hub or their router, after all) but does seem a bit underpowered for something that doesn't need to be. Must be why people report that these outlets are a bit less attractive routers than some others, even though they do work well for the tricky devices that Xiaomi sensors are.

The US version of the outlet is also 14 dBm. The control switch in the kit is 3dBm.

I think you also have to remember that technologies like Z-Wave and ZigBee are designed to be mesh-based as opposed to having huge point-to-point range.

Having a huge range can actually be detrimental to mesh networks because it can mean that nodes try to hang on to a routing device that's further away just because they can "see" it, whereas the closer routing device that perhaps has slightly less range would be a more stable option.

I've got four of these IKEA signal repeaters now and along with the USB convenience I'm finding them pretty good in general, I don't see any difference in route links between them and other router devices. End devices seem to be stable on them too so far.

Very true. I was always worried about my thermostat routing through a Cree bulb on my patio, while my hub was only 10 feet away.

Good to hear the repeaters are working well for you!

Nothing here in Canada yet. Looks like US has online inventory at least. Very interesting that US IKEA customers are being asked to pay more for the dedicated repeater than the outlet. Probably a mistake that caused them to be charged higher fees for importing a "repeater" versus an "outlet".

How do those repeaters work? Just connect them to the hub like any other device and stick them near dead zones?

Exactly. give it 24 hours or more for devices to find their way. Zigbee self routes, but it takes time.
They'll route to one another if needed.