Hi All, I returned the Symfonisk remotes I had and then decided I would give it one more go with a new one. I did the latest platform update and paired the new remote and so far the battery life looks like it might be ok. I guess I'll need to wait a couple more days to be sure, so time will tell.

Is the battery level correctly reported?

In frequency and value?

This time it took about 6 days from when I paired it for the battery to go flat. (The device stopped working and I checked battery with a multimeter)

I really like the form factor of this button but think I'll just stick to the Samsung ones for now.

Mine reports battery 0,0 and continues to work.

It’s been weeks since the first battery 0 report. 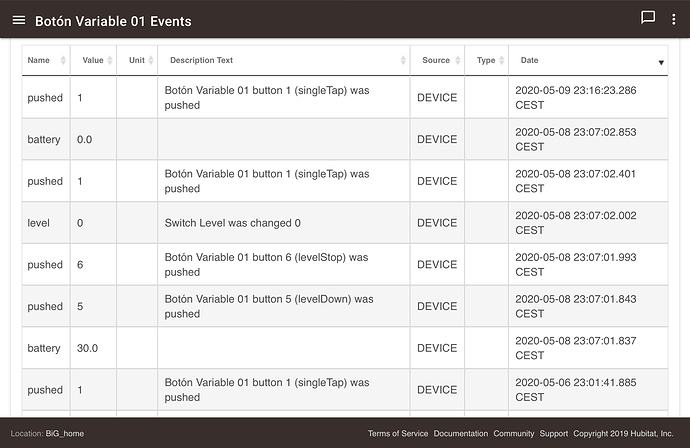 Anyone make any progress with this? would love to see it working like an "analog dimmer" style control out of the box.

Tested one, got it working, but got the battery drain issue. Is that connected to the driver or a faulty unit?

I am now using three of them. All three report battery wrongly. One has been at zero battery for months now.

I believe it is a driver issue. Nevertheless, IMHO, they work fine and their use as dimmer with this driver is great.

Thanks for that, the IKEA leaflet shows press and hold for greater than 10 seconds, rather than 4 rapid presses, but your method worked, theirs didn't.

Has anybody found a fix for the battery reporting issue?

I have just changed the battery in one of them and cleanly fresh reports 50%.

I don't know if you're still here, or is someone else might wanna step up to the plate, but I have an idea on how to get analog support for this, however it requires rewriting the driver, which is something WAY beyond even my wildest dreams.

So my idea is this:
So, could you make it so that every X values on the CCW/CW, the driver switches from pressing buttons 4 or 5, to pressing button 6 and for every Y values it switches back from button 6 to buttons 4 or 5? Ideally X and Y should not be hardcoded, but made easily editable by the user, to help with edge case scenarios.

An example on how this would work, with example values X=5 and Y=1:
You turn the knob to the right, driver reports button 4 as pressed, but at the same time, driver reads CW/CCW. Every 5 step change on the CW/CCW, the driver switches from button 4 to button 6 and then, every 1 step change, the driver switches back to button 4.
What this means is that now you can just keep rotating the knob, as you would an analog one, because the driver will no longer report button 4 as being continually pressed, it will instead report a constant press/release cycle, akin to a tachometer.

I wanted to share my basic control using the puck just for a Sonos/Symfonisk speaker. I wanted to eliminate the Ikea gateway since the puck was the only device that lived on it. This is a "good enough" solution for me. 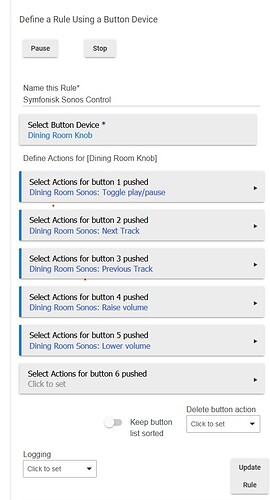 @nbrew is this a Rule Manager rule? A Basic Rule? A Button Controller?

how have you got 5 buttons showing for this device, i've only got 3 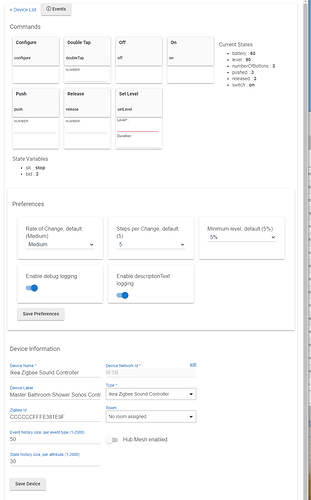 Hey bf1, I had to go back and check. This was indeed a Rule Machine rule. The extra buttons come from a community driver linked in the comments for this thread.

Different driver. Should be 6 buttons actually. Honestly, I’m not even using this on HE anymore. It dropped too frequently and the battery would just die. I have it joined to HA now and my Sonos is there too. Just works better over there. I don’t use HA for much except a bridge to Xiaomi stuff, but this is the one exception since it was more stable for the Symfonisk controller.

Don't know if this will help, but I've made my own Symfonisk Remote driver with device presence monitoring. It has an analogue-like percentage level, though its button behaviour is a bit different to this one for single, double and triple press support.

The trick to doing it as you describe is that some code must continue to run and check that the rotation has not completed, then independently adjust the level. That's not how the drivers really work; they run on events and close out. I'm not even sure it's possible for a driver to spin off another task in that way (I've certainly never done it).

Have you tackled the battery issue for this device?

Nope, as it says on the driver page I couldn’t make any sense of it. There’s a fudge in place to make the reporting a little more realistic, but the battery level changes depending on which button you’ve just activated. Pressing almost always results in a report of 11% for some reason.

And your experience of consumption with your driver?

I haven’t been able to understand what determines their consumption. I have been substituting them for other buttons. Strange that I have one with more than eight months of fully reliable behavior.

And your experience of consumption with your driver?

Well, it's only a few days old at this point so I can't really say, especially as the battery data appears to be nonsense. Right now it's been connected to the network and reporting in at least hourly for 4 days and the battery says 87%. But then it's said 11%, 44%, 150%... In fact, if you press the button and then force a refresh (which asks for the battery data) it often comes back and says 11%... but not tonight. Seems we're stuck on 87%.

It's working perfectly fine though. Very responsive, though not as quick as the simpler buttons, which are so fast you're still touching them after the automation has completed. The Mirror Me function means I can pair it to dimmer modules and control them as a group. Very cool.