Hello there, brand n00b here. I just got my Hub and started setup today.

I have a HUE white and color ambiance bulb, but I am unable to control it from the devices page. The bulb was discovered, however the device type was unrecognized. I tried manually setting the type to various different hueBridgeBulb devices, but so far I am still unable to control any functions of this bulb. Is there a specific device type that will work?

I do not have a HUE hub/bridge. Screenshot of devices page below. Any assistance with integrating this bulb would be very much appreciated.

... OK image not included because I apparently am too new here to post an image. This seems a bit odd. I would think new users might need to post pics to assist with setup. Secondary question - what do I have to do in order to be able to post images?

Link to image I can't put inline in the message.

OK, looks like I should now be able to post images. Below is the image of my device page for the HUE bulb. 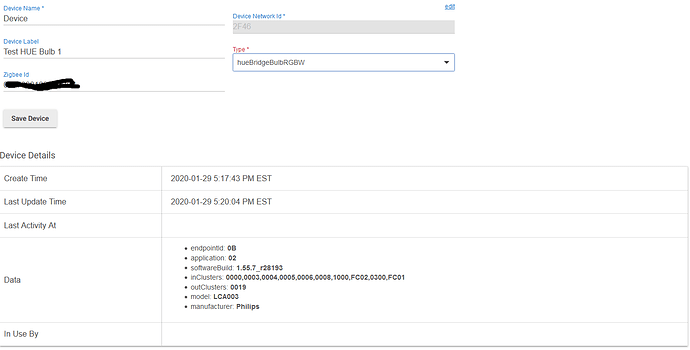 That's not a Hue Bridge bulb, that's a directly connected Hue bulb via Zigbee. The Generic Zigbee RGBW Light driver would be the appropriate driver for a Hue White and Color bulb connected in this manner. Be sure to click "Configure" after changing to the new driver.

Also, if you have non-bulbs on the same Zigbee network, this is a must-read: How to Build a Solid Zigbee Mesh - Hubitat Documentation

Thanks @bertabcd1234! That is precisely what I was looking for. I assumed that the HUEbridge driver was wrong, as I wasn't using a bridge, but did not see any other appropriate HUE drivers. The generic driver is working great!

I am familiar with mesh networks and have seen that article, but thanks for linking it here. Right now I am labbing all of this equipment in my basement. Once I have decided on bulbs and switches for the final purchases I will concentrate on the meshiness. Since you brought it up though, are most direct control bulbs repeaters also, or are some treated as end devices?

Sengled bulbs are the only Zigbee ones I know of that do not repeat. The others brands of Zigbee bulbs do repeat but usually do a lousy job of it for anything other than bulbs. That's why it's recommended to keep them on a separate mesh of their own. As with most things though, YMMV.

Yes, the "Set Color" command should work, as should the individual "Set Hue" and "Set Saturation" commands (along with "Set Level"), which is all that "Set Color" does except as a single command instead of separate commands. The Hubitat color picker with the "Set Color" command should visually guide you through choosing valid values, but otherwise Hubitat's default hue model goes 0-100 (instead of 0-360 like the standard model or 0-65535 like the Hue API), and saturation and level both also go 0-100 (or technically 1-100 for level that actually are represented).

Does "Set Color" (or the individual "Set Hue" or "Set Saturation" commands) not work for you with valid values? Do you see any errors in the logs when you try? Finally, are these first-party Hue bulbs, and if so, what generation/model? Some third-party bulbs (Ikea are the only ones I know of, but there could be more) do not support Hubitat's hue/saturation color model (just xy), and as such, will not work like this--whether paired directly to Hubitat or used via the Hue Bridge Integration. But all Hue White and Color bulbs I've seen (including the first-gen that didn't call themselves "white and color" yet since they all were) support all three modes: hue/saturation, xy, and ct.