I have a bunch of plugs, dimmers and switches that show up on the Devices tab on the mobile app. However, the displayed state of some of them is highly unreliable. Sometimes a plug is yellow, meaning turned on, but the plug is actually turned off. If I go into the webb app and check the status, it is correctly reported as off. I'm not 100% sure, but I think I've seen the reverse also (looking like it's turned off on the Devices tab when it's actually turned on). The same can happen for switches and dimmers.

Also, sometimes when I try to turn on or off from the Devices tab it doesn't really change the state. The icon on the Devices tab just blinks for a long time and then goes back to the same state. Sometimes it works to turn on a switch (i.e. the actual lamp turns on) but the tile only shows the spinner in the corner, and never actually changes state to visualize as "turned on". In this case, I can't turn of the switch I just turned on in the Devices tab. I have to get into the web interface to turn off the switch.

Performing the same actions in the web interface works fine.

Does anyone else have the same problems? Anyone that knows why it happens? And most importantly, what can I do about it?

@wentzel Are these z-wave or zigbee plugs? If any of them are just z-wave and not plus they won't properly report their status until polled. You would need to install the built in z-wave poller. You shouldn't have issues like that with zigbee stuff.

The icon on the Devices tab just blinks for a long time and then goes back to the same state.

This is a known issue and a better solution is in development. I do not know when the next Mobile app update will be released. If this is "mission critical" to you, I suggest using a Dashboard in the interim.

Thanks for your input!

I believe it’s all Z-wave plus. If it wasn’t, wouldn’t it also be the incorrect state when I use the web interface to check the device status? As mentioned, the issue is only in the Devices tab on the mobile app.

Can you post a copy of your z-wave details page as well?

Thanks for wanting to help me! I'm just not sure I feel comfortable sharing that openly on the Internet. I'm not knowledgable enough to know if that would compromise the security of my home.

If you would be willing to share what you would look for in my z-wave details page, I would be super happy to learn! Before you mentioned it, I didn't even know there was one

Thanks for wanting to help me! I'm just not sure I feel comfortable sharing that openly on the Internet. I'm not knowledgable enough to know if that would compromise the security of my home.

Nothing compromising in your z-wave details page... looking for ghosts and signal etc... Such has here is some of mine... As you can see there is no identifying things just diag information.. It helps us help you (I didn't post the whole list because I have a lot and just giving you an example) 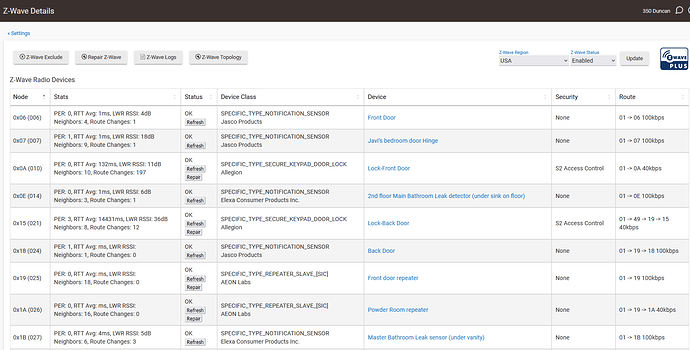 Oh that’s interesting! Your page includes completely different information than mine. Do you run a beta version? Or some sort of add-on? I only have the following columns: Node, DeviceID, Device type, Clusters, Last sent, Last received.

I am really thankful for others wanting to help. But I just can’t publish data about exactly what products make up my home security system openly on the Internet. If anyone wants to offer guidance on how to identify ghosts and signal problems and other issues, that would be greatly appreciated.

You sound like you have a c5 hub. Your settings page is different but please still post it so we can make sure it's clean and a good or bad mesh. Again no real identifying data. Now mac addr and uid you should never post openly

@rlithgow1 was kind enough to look at my z-wave details page in private. However, we could see no obvious issues.

So if anyone has any ideas, I'm still looking for help on this one. A thought I got thanks to Rick's pointers was that maybe it's a problem that several devices have the same Device ID? How did that happen, and does it matter?

@wentzel I also didn't look for one thing, are any of those mains powered devices plain z-wave vs z-wave plus?

As far as I know they’re all z-wave plus. Is there a way to see that in the Hubitat interface? Otherwise I have to google for a few manuals to double check ….

the nodes should all start with 0x5e

However, some have the same Device ID as others. Could that be an issue?

Can you send your z-wave details page again to me in PM and let me look at that?

So I looked at it again, and I guess I misunderstood what is meant by "Device ID". It seems like all products of the same kind have the same Device ID. I thought it would be a unique identifier for the specific device instance. I'm not sure why Device ID in the implemented sense is needed since it seems to be a direct mapping to "Device Type".

Instead, I tried doing a Z-wave repair, but unfortunately that din't help at all.

I also have another problem, with very chatty devices. Looking in the log, some devices send the same message maybe 5-10 times within a few seconds. It can be simple messages such as battery reporting, temperature reporting or so. I don't know if that problem could be related? I feel like this often happens when I hit the "good night" button, and that all these messages block the hub from actually performing the good night actions.

Really hoping to get some guidance here. It's quite annoying that it takes so many clicks and so much waiting time to see and change the status of my devices

What devices are being chatty? (Make/model) Do they do power reporting? Chatty stuff can certainly crush a mesh

@rlithgow1 So today I looked into it in more detail. Actually when just doing nothing there doesn't really seem to be any chatty devices (except for an Aeon multisensor that keeps reporting illuminance changes, but that's sort of expected if I want a light sensor

However, I have a "good night routine" (rule machine) that turns off a bunch of lights/plugs and then sets the mode to Night. Now when I press that, it looks like this: 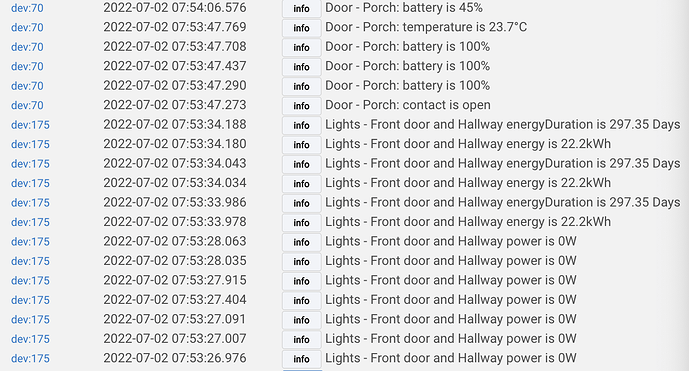 Furthermore, when I run the same good night routine just a few minutes later, it looks like this: 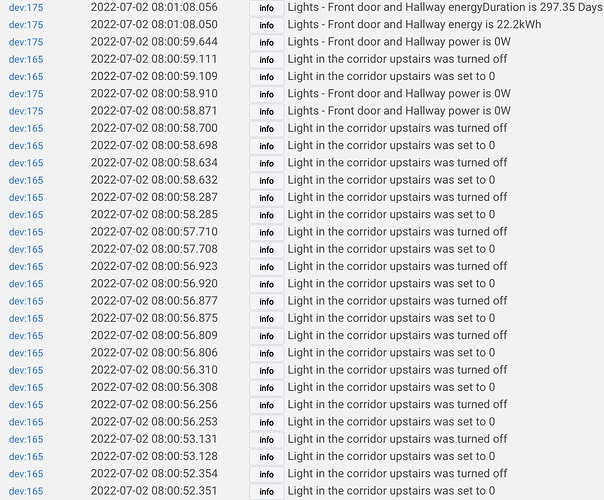 So now it device 165 (Sunricher SR-ZV2835RAC-S) that is sending multiple copies of the same message within a few seconds.

And this can be what happens, but it's different devices each time. Sometimes the lights in the routine actually turn off, sometimes just some of them turns off, and sometimes none of them turn off.

Do you need power reporting? If not, I would turn that off on all devices where you are not using it. I find that if there is a Watts Change number (50W change, for example) that seems to report less than the other reporting parameters. But definitely turn things up high or off if you don't use that feature.

And this can be what happens, but it's different devices each time. Sometimes the lights in the routine actually turn off, sometimes just some of them turns off, and sometimes none of them turn off.

I would suspect a weak mesh if this repeated message moves to various devices.