Hi Nic,
Tried that on another thread, also been back and forwards with Bobby. Not sure how many Aussies have the HE but I've not been able to find anyone who has a successful secure connect on Zwave here. Including two of us with Aeotec Garage door openers which are pretty common. We have a "b" version for Aus and US is "A" version. (due to frequency). Wondering if there is a fundamental issue. Will post additional success for Aus stuff here
Cheers
Mike

News from the ZWave front! I found the culprit for my inability to pair anything in secure mode and it was the Au-zwaveme dongle that came with the unit.

Won't bore you with all the ins and outs but a couple of weeks of frustration was cured when I replaced the dongle with a Zstick and after that have paired my garage door opener, two door locks (KAS600) and Zconnect Garage controller I use on my electric driveway gates. ALL PAIRED FIRST TIME IN SECURE MODE ......meaning they now work!

So my score is

That’s great news that you’ve got it sorted but not so good for the rest of us Aussies eh ?
@mike.maxwell, @patrick, @bobbyD, @bravenel etc. are there plans on resolving this for others ??

Does anyone else find it completely and utterly bizarre that RACV is distributing SmartThings in Australia? WTF is that about?!

Yep. Sure is odd.
For those not in Aus, RACV is one of our states car clubs.

I certainly can't see how it's going to help Samsung with any significant amount of adoption.

But hey no bother for those of us who have landed here! I ordered my Hubitat two days, can't wait for it to arrive!

Glad to see an Aussie thread in here, I'm in Melbourne

I’m in Sydney. I’ve had my HE about 8 or 9 months and it’s been solid !
I started very slowly, just adding a couple of door sensors and learnt from them.
Drivers and Apps are getting more reliable every day and I’ve been VERY cautious adding 3rd party ones and if I do, I proceed methodically.
I avoid being in the “Bleeding Edge” of technology.

Welcome, by the way.

I expect I'll take a similar approach to the one your describe. I'm more interested in rock solid reliability than I am in pushing the boundaries. Besides, my level of coding experience is pretty basic and that was years ago!

Happy to play with the communities Apps and Drivers as long as most folks seem to think they are reliably past Beta.

My setup is pretty basic at the moment anyway - Sonoff switches for lamps, fans etc, Harmony Hub & an HTPC for A/V, Sonos, Sensibo for A/C and a few other bits and bobs. Really looking forward to getting various sensors up and running to build some proper automatons with the Hubitat.

Is is worth us aussies setting up a proper Aus Hubitat thread for recommending devices, localised community support etc? I'm about to start researching which sensors to buy and want to make sure they work well in our part of the world. Thoughts?

Hi
I am in Melbourne. Been using HE for last couple of months. Just startig on it. have
few Xiaomi contact and motion sensors
Konected home alarm attached
few sonof and brilliant ( bunning) switches with lamps.
Just got Ikea tradfri bulbs and sensors ( havnt opened yet)
looking at getting fibaro dual switches and dimmers done soon for lighting automation
Alexa voice control
RM Pro+

Any thoughts on Z-Wave vs Zigbee? I'll take a look at Fibaro, cheers

I'm in Melbourne as well. Just starting to move into my new house, so the setup is about to begin for me. Have found that zwave is far more common for Aus retailers as far as switches and dimmers. 3a smarthome have some zigbee but the quality is questionable from what I hear on places like whirlpool.

Thought my place had gu10 spots but they've got mr16 low voltage LEDs with transformers, so I've got to rethink the smart lighting a bit. Have thinking the clipsal impress switch with fibaro/goap/aeotec in wall switches. Only problem is the likely lack of neutral wiring to the switches.

I'm ended up with a mix of everything, as I've had various 'plays' with HA gear of the years, and only now getting the whole place up an running.

Right now I've got 1 Z-Wave and 2 Zigbee networks, with:

I also have a few TP-Link WiFi Plug sockets.

I've got it all talking well to 3 Voice Assistant platforms:

I still have to figure out a permanent solution for the light switches, as I've got a mix of stuff. One thing I'm going to try is to wire and solder the guts of a Hue Dimmer Switch to 4 push buttons in a 4 gang Clipsal plate, and if that works well I'll go full Clipsal.

I've also got finish getting all the sensors up and running, and play more with the Rule Machine. It still a push button and Voice Assistant house.

Lots to do but I'm chipping away at it!

just a coupe of FYIs that you may find interesting. Zigbee is 2.4 Ghz and works globally on the same frequency although voltage and cycles vary. My cousin has been regularly buying US zibee lightbulbs from GE and Sylvania and used them in Pakistan and they have worked on 220 just fine, I guess internally there is voltage conversion going on in those bulbs and just like other DC devices these days they work from 110-240. He started about 3 years ago, and just experimented. Ofcourse your milage may vary, because they are rated for 110, but you should be able to try the sale items from individual sellers, especially from ebay and teh Smartthings forum. Ofcourse this only for light bulbs, plugs and other devices should be properly rated

I'm curious as to which suppliers Aussies are using to buy their smart products. Obviously there is Amazon AU/US and Ebay, but which other more local outfits have you come across?

These are the ones that seem to crop up for me a fair bit, but yet to purchase from any of them:

A few I've found in searching (including yours above), but haven't necessarily used is 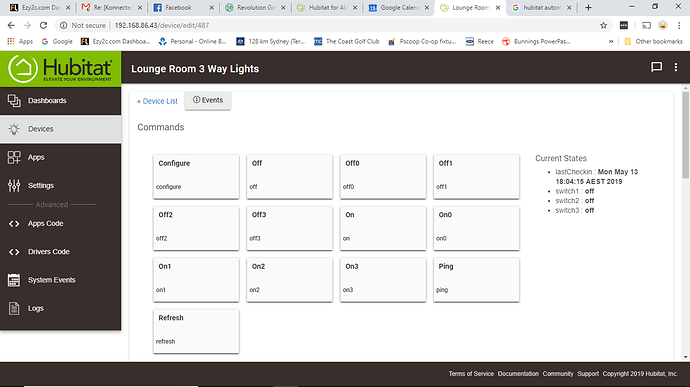 I also have a Nue Zigbee Double Power Point, I guess this would work in a similar way?

Not sure I’m going to be Much help to you as I don’t use HE with lighting BUT you need to open the logs. With Log tab open press the buttons in the driver for the switches and they should be reported there. If not then exclude then re pair the switches taking note of what what’s initially discovered by HE.
That data may assist others with your issue.

Also what’s with NUE and HUI ??
Same, same or different ?

Thanks I'll have a look at the logs.
I think NUE & HUI are manufacturer names, see below 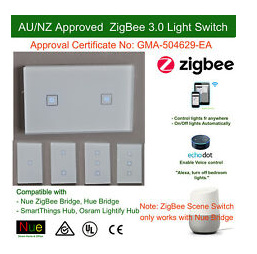 Take a close look at this thread. You'll need to note the correct endpoints, and modify the driver in at least 3 locations. Once you've done that, ensure that you can turn all 3 lights/endpoints on and off from within the driver (individually - on1, on2, on3 etc).

Then load the device sync app by pasting the code into into the app code section, then from the main app page, select "load user app" from the top right. Install an instance of the app and select the 3 gang switch as the switch. You can them rename that instance of the app, and it will auto-create the 3 endpoints as new virtual switches (you will also need to ensure that you have loaded the virtual switch driver). You can then turn on/off each individual light switch via the newly created virutal switches (via google/alexa etc).