I'm just starting out with Hubitat and at this point really struggling to develop an appreciation. I've select a Hubitat Hub, 2-Aeotech Doorbell 6 devices, and 1-Aeotech MultiSensor 6 device. All of the devices appear when viewed under the devices tab and I have figured out that I have to set the desired chime/tone by editing the preferences for the associated buttons for each doorbell. Using the Hubitat Dashboard app I can let it auto-generate a dashboard with a tile for each device. The only items on the generated dashboard which have any information are the temperature and humidity from the multisensor 6. Nothing for the doorbells or their buttons do anything. The motion sensor simply shows inactive. The doorbells show as "music player" but the tiles and icons do absolutely nothing. I'm really starting to wonder "Why Hubitat Elevation". I've used the rule machine to create a simple rule which is supposed to ring both doorbells when a single button is pushed. The rule can be run from the application editor and works but, it never works when the assigned button is pushed even though the doorbell originally linked to the button does chime. Documentation and Hubitat application functionality seem very poor. What am I missing?

I do have many devices, but have struggled with the dashboard. Even if I get things into the dashboard they are not always responsive or update status properly. The things I love about HE is that I was able to get literally all of my devices moved over from Wink and then some that didn't even work properly before on Wink; I was able to set up simple automation and rule machine rules to do almost everything I can think of (and do it better than before). I was able to create virtual devices to trick things to act like switches with IFTTT; was able to get things working with Google Home for voice; and also with homebridge for Siri. I have a Sonos with Google home (voice), and a homepod mini (homekit/siri). I'm able to control so many things with my voice on the iOS devices, or the homepod, or the Sonos, and for most other things I can flick up and use the Apple Home on the iOS device. Almost to the point I don't even think about the HE dashboard (which I don't like very much after having used Wink). There are also a number of 3rd party apps that can give you a nicer dashboard that tie in with makerAPI or other options.

Aside from dashboards, the other functionality is really good, there's expansion with community packages, there's notifications with the Hubitat app and a way to set that up without too much trouble (for example when front door lock status changes or who pushed a code).

Motion alerts are coming from my Ring (to ring app, but also working on my Hubitat app). I'm also feeling confident I can add more devices, like smart shades, or things I didn't even consider before.

Hope this helps? I too was wondering for a while, but now that I have a solid dashboard (outside of HE) I'm mostly very pleased. It also works really fast.

I and others here can help you get sorted as you begin to learn the system better. I’m wondering if you could elaborate on your comment about the documentation. We are working to improve it for users that are new to the platform and/or are unfamiliar with home automation in general.

Can you please offer what you found confusing, missing, not helpful, etc?

Thanks for responding. What are you using for a dashboard? I have been searching the documentation to determine if it would be practical for me to develop my own custom dashboard. I've uploaded my current dashboard and one of the basic frustrations to me is there is zero explanation of what the user is looking at or what the icons mean. In my web programming I would at least have bubble help/descriptions. 100% is a dimensionless number and here the user must guess/assume what 100% is referring to. ! would gladly program my own web interface if I could find documentation to support such an effort. Thanks CurrentDashboard|690x146

Hubitat Dashboards are pretty basic. No argument there. I don’t personally use them. My home is automated and what control I ever do access from my phone, is via HomeKit. I get wanting a central dashboard you can just walk up to sometimes. I use a Google Home for that myself.

There are options if you don’t like the Hubitat Dashboard. There’s SharpTools and ActonTiles was also just added. There are also community built dashboards you can try.

When you say the documentation for Dashboard seems very poor, are you referring to the user docs, the developer docs, or both?

SNippets of a couple of mine. They took all of 5 mins to make. But I'm more of @SmartHomePrimer's mindset of set it and forget it. Mine are mostly for looking at status not remote control. The less I have to interact with anything the better. If you don't mind a little CSS editing, you can add more values to a single button 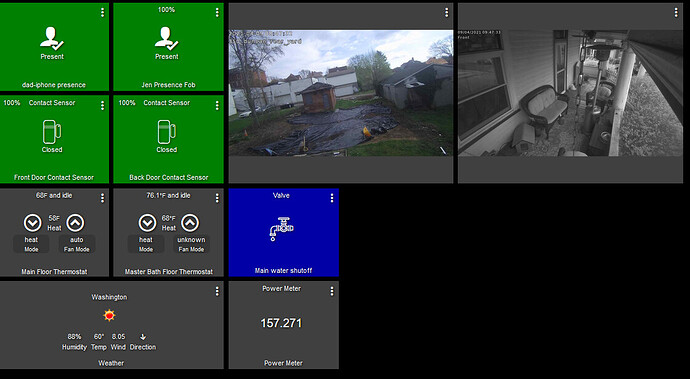 I really like what you've done. Like you I am more interested in security and status than automation. I do hope to complete some simple automations like lighting control for morning wakeup etc. I am curious what cameras you have integrated in your dashboard. My first attempt with smart home involved Google home hub, home speaker, and home mini and a sylvania lightify starter kit. The lightify proved very unreliable and after Google offered to join a few conversations between my wife and I they are now unplugged and in a cabinet. I really like the local control and cloud free potential of Hubitat.

I haven't found anything related to what I would call development yet. User documentation lacks in that I like the details adequate to fully utilize the product. I have yet to get the logging working as I would expect (I spent over 30 years in the development of software for manufacturing on and integration of those systems with business (ERP) systems so my expectations of logging may be a little higher. I just added a GE Enbrighton switch to my system and even though it is readily found in the devices on the hub it isn't available to add to my current Hubitat Dashboard. Maybe I have to delete and recreate the dashboard so get back to a point where I can select the new device. Still looking.

Have you added it to the available device list for that dashboard?

Still looking for the path to perform that task. I could add it to the json but I would have thought I would be able to find another path to simply select the device. It isn't available under settings for the dashboard. Maybe settings for the parent.

If you could provide the path that allows me to add that device to the dashboard it would be greatly appreciated. I looked all through settings and settings for the dashboard itself and haven't found it yet. It does show up as a device and with neighbors. I've also added it to the hub mesh. I have a visual imparity so maybe I'm just not seeing an icon someplace. Thanks

Finally found the path. I had to select the child dashboard under the hubitat dashboard application to get to the rest of the settings.

You got it. Sorry I was so slow - I just saw your message.

Sorry you’re not satisfied with the documentation as it is. We’re making strides to improve it. However, I’m not sure you’re reading it either. You’re saying you can find options that are documented.

Yes, I've read that. I am afraid that I find the screen shots very fuzzy and difficult to make out. This is the documentation I reviewed when first creating my dashboard. I ran into trouble finding the path to get back in to add devices which had been added after the initial dashboard creation. Thanks. Right now because there is an obvious bug associated with the Aeotec Doorbell 6 I'm trying to determine if that is something I can correct. The Hubitat generated dashboard does nothing but log java errors. When I use the Hubitat Dashboard created by Joe Page I get a lot further but still have error messages. The doorbell uses the music player template but the problem may be the driver. I've programmed in Fortran, C, Powerbuilder, Java, etc. with most of that time spent debugging code written by my subordinates. Some PLC time but I'm not fond of that. One problem I have right now is that no matter how I set the options for logging the only place I find anything is under past logs. I'm still learning how to use this environment.

You have to have a log window open in another tab to see them in real time.

What I have discovered is that the Aeotec buttons do not trigger an event. When paired with a doorbell the doorbell will play the assigned chime but, the rule engine never sees an event. The device settings can be used to change the chime associated with a button and to associate a second button with a chime. So far, neither the "pushed" or the "released" event associated with the buttons are logged or recognized in the rule engine. The Aeo multi-sensor 6 however does trigger an event for motion and actions can be assigned, logged, and do occur. I read in another thread someplace that someone was having issues with the buttons. Might be a common problem or maybe it is a network timing issue.