How do I create a rule that lets me select a specific light, change its brightness, select the next, and so on?

I have a Lightify 4-Button controller and three lights in my living room. Here's what I want to do:

Long-pressing button 4 should exit this process.

Is there any way I can set this up with rule machine?

You can use this global variable in your other long press triggered rules, too.

I'm not sure I get the logic completely. I get how to program the selection process. I can use [SelectedLight] as a global variable and program a rule to increase it by 1 whenever Button 1 is pressed. What I don't understand how to do is the (do whatever you want to light 1) part.

How do I program that part in? Would I need to create a separate increase/decrease brightness rule for every light I have?

I set four rules up: 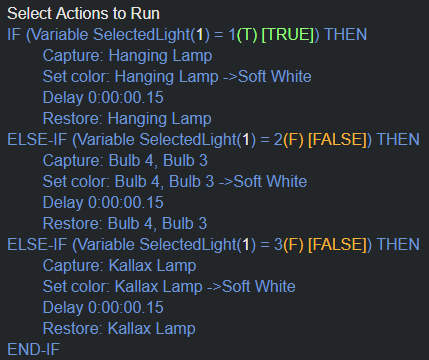 I have a group for Bulb 1, 3, 4, and 6, but for some reason the capture and restore doesn't work with groups.

The Select Light rule increases the global variable by 1 and flashes the selected light:

Finally, there's the adjustment rules. One for increasing the brightness:

and one for reducing it:

The brightness reduction rule also checks if the light is switched on. If it's off, then it makes no sense reducing the brightness.

I can't think of a better way to implement this. If anyone here has any suggestions to clean this whole operation up, that'd be awesome.

Ideally, it would be amazing if I could create something like a look up table where I can specify
1 = Hanging Lamp
2 = Ceiling Lamp
and so on, so that I don't need to create multiple conditions in each rule.

This would also help with streamlining the brightness steps. If I could make a global variable called "BrightnessStep" and then use this in the rule to increase and decrease the brightness based on this variable, I woudn't need to edit multiple statements if I want to change the steps.

Great job, that looks pretty clean! I don't know how much more you could streamline it other than how you mentioned; with mapping the lights to a variable. I have not heard or have seen a way to do that. I think you should be able to use global variables for the step value though, create the variables then instead of putting 10 in the field use %GlobalBrightnessIncrease% (set to 10) or %GlobalBrightnessDecrease% (set to -10).

You'll see the discussion of the use of many simple rules vs. lesser more complex rules pop up from time to time here and it's a matter of preference. Since rules are free, my preference is many simple rules so what you have looks really good to me.

All righty, here's what I've done:
I set two numerical variables up

And added them to both rules:

Seems to be working.

Now I need to figure out if there's a way to do this for lights as well.

Glad you got it working. Usually the variable approach works wherever a value is needed. Assuming no typos I'd have to defer to Bruce, the RM master, to see why this specific use case is not working,