How can I replicate SmartThings "routines" in Hubitat?

New HE user here (moving from Smartthings) and still trying to find my footing, so bear with me. Glad I found this group as there is a lot of good information here to pick through. Being as I'm coming from a Smartthings environment, I think I'm mainly having an issue about how HE does things differently. I have all of my devices moved over to HE and all are working fine, but my question is how would I set up some of the automations in HE that I did in ST? For example, in ST I used what they call "Routines" which I could either activate using the ST app or via voice command using Alexa. None of the routines I use are overly complicated and most are just turning lights on/off/dimmer level based on the routine. The issue I'm having is trying to figure out how to get a similar function using HE. If anyone could shed some light on this, I'd appreciate it. Here's a couple of routines that I had setup in ST as an example:

Later we may run another routine called "Kitchen"

Then we may run another routine called "Relax" which would:

End of day would be "Goodnight":

I think part of the issue is trying to figure out if I use rules, groups, scenes or virtual buttons/switch to accomplish this. Ideally, I would like to just create a dashboard with a button on it for each "scene/routine" I've created and also connect Alexa so that I can run those by voice command as well. I think if I could get one working, I can replicate the others I need.

Thanks in advance for any help!

Welcome! I am a wink / ST survivor too.

trying to figure out if I use rules, groups, scenes or virtual buttons/switch to accomplish this.

One of the things you'll quickly discover is that with HE there are often many ways of doing the same thing. Many of us try to use automation as opposed to remote control - that is, having your "good morning" routine trigger automatically using any number of methods. Likewise your kitchen routine might easily be triggered by a motion sensor rather than human interaction. However, both are easily accomplished.

The easiest way to do what you want is to create a virtual switch for each function you want to initiate, then create a rule using either simple or basic rules... or you can use the new "room lighting" app... or if you want to go crazy you can use Rule Machine. Using any of these tools you can have the switch active the automation by turning on and deactivate by turning off. Or you can have it activate by turning on and then automatically turn off after X, or any number of other ways to turn them off. You can also add the virtual switch to a dashboard. Then go into the Alexa app and create a routine that turns on (or off) the switch on command. Or if you dont want to bother with a routine in the Alexa app you can just say "Alexa, turn on X" where X is the name you give your virtual switch.

Here's a really basic example that turns on my outside lights for 120 seconds when a virtual switch is activated, but only between sunset and sunrise. The virtual switch can be turned on with Alexa, with a dashboard, or through other rules (not shown) by my camera system or by motion sensors. My virtual switches turn off automatically after a second - I really only use them to trigger various rules. 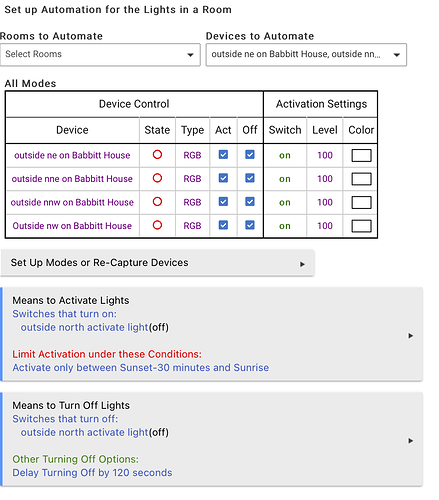 I think part of the issue is trying to figure out if I use rules, groups, scenes or virtual buttons/switch to accomplish this.

Welcome to Hubitat forums! There are multiple ways to do things in Hubitat! It is good to have choices, but like you say it can be overwhelming at times.

Basic rules and virtual switches is a good place to start for many beginners, but Scenes app might be a bit easier here in my opinion. You would set up the scene with things set to particular colors and dimming levels, and it would automatically create a virtual device (Scene Activator) upon saving the scene. You would expose this virtual switch to Alexa, or a Dashboard, or even use it in a time based rule. Groups and Scenes - Hubitat Documentation 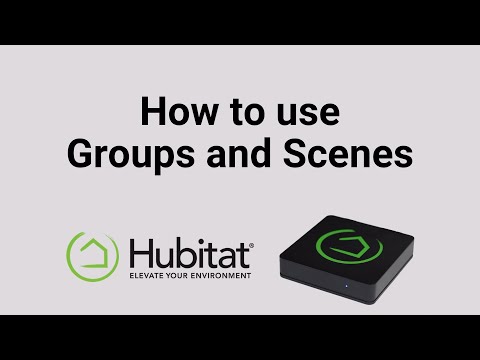 I think the newer Rooms app is a great choice too, it might not be the easiest to understand for beginners, to me it is a more intermediate level app than a Basic Rule would be, but it is a very powerful tool that can do a lot of things in one app rather than spread into various apps. This app depends upon you having put all your devices in rooms to really work the best. You might try it as Brad suggests above and see if it is easier than Scenes for you.

Thanks, your answer pointed me in the right direction. I ended up using virtual switches and basic rules and it works great. Still have some tweaking to do, but it’s getting there!

This topic has been marked solved by the community and subsequently closed. For further discussion on this topic, feel free to create a new thread under appropriate category.