I'm migrating from SmartThings to Hubitat Elevation, and things were going well at first...

After I moved over the first 8 or so switches, I suddenly started seeing prompts to enter my security key... something I didn't have to deal with with the first ~8 switches, nor ever with SmartThings.

When I first try to pair it, I'm prompted with this popup (those middle two are checked by default):

If I check either of the top two options, I am them prompted to enter my DSK: 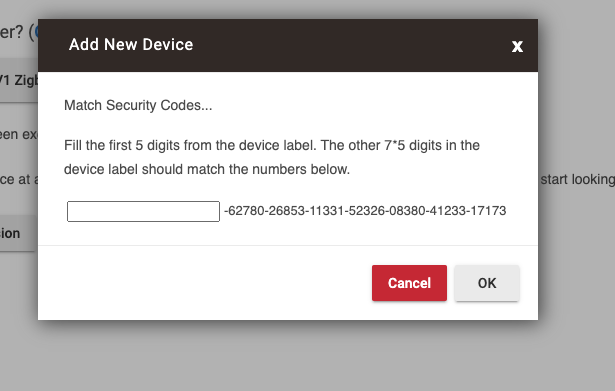 If I only select one of the "Unauthenticated" options, then it hangs on Initialization for the device indefinitely (I've let it run over night just in case): 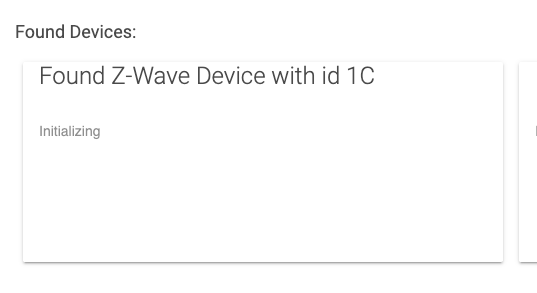 At this point, inclusion seems kind of messed up. It always brings the item I failed to pair up if I try again until I do an exclusion on that device.

I realize I could pull out all my switches and look at the DSK, but I haven't had to do that before and I really don't want to mess with it now... that's a lot of extra work to pull all those out (I think the key is on the back?). And even then... I remember there being a sticker, and I can't promise I left them all there...

It's really confusing that some of the switches worked before they started asking me for a DSK, and then like the next 5 I tried all prompted for it.

Things I haven't tried that would probably work:

Switches that have failed with these same symptoms:

I have a WD-200+ and had no problems adding it to Hubitat (the switch being new).

What settings do you have for:
Settings / ZWave?

Should only be locks and doors....

Were the devices properly excluded from ST?

I did triple check it was excluded from SmartThings (I added that in the "things I tried list").

Here's a screenshot of the same page from my Hubitat... it's different than yours, tho.

I updated my Hubitat when I first got it on Monday, so it should be the latest version.

Apparently the C7 had some different screens to go with the added capability. I'm running an old time C-4. There is a dedicated C-7 category (I think under getting started. I would add C-7 to your subject.

Thanks for trying. I added it to the subject.

I couldn't find an option for secure/insecure join anywhere.

Uncheck all the security key options if you don't have the dsk.

Same thing happens to me with the Innovellis. When it’s hanging, try reboot and then try to add again and it should hopefully go through.

At one point it the zwave device seemed to actually have been locked up and I had to shutdown and pull the plug to get it working again.

The Hubitat Z-Wave radio is giving me tons of issues.

I finally managed to get about 14ish (it's too late to do a full count) paired. But it was a major pain. Almost every time it would get stuck on "Initializing" for a long time. Sometimes it would eventually show up, but sometimes it would fail. And it definitely would never work afterwards until I fully cleaned up the failures. Maybe do a Repair (which is taken 30+ minutes for some reason) and throw in a few reboots for fun.

A few times, it'd get in weird states and no Z-Wave communication would seem to work.

I moved on to trying to pair some contact sensors, and again... it wouldn't work. I have two other Z-Wave hubs here (one of those Aeon Z-Sticks as well as the SmartThings). Both of those work immediately and every time. It's only the Hubitat that's given me all these issues. I've tried for an hour and am giving up on this stupid contact sensor, lol.

I don't know what else to do, but I'm about ready to give up. I've put in probably 12-15 hours over the last couple days fiddling with all this. I could probably get it all set back up on SmartThings in 20 minutes, which is sounding mighty tempting right now.

There have been a number of reports in the forums with various devices getting stuck on the initialization. I know the team is looking into it and I haven't heard of any updates since.

I just finished migrating my 80 zwave devices and the whole mesh is a mess. I have unknown devices, and things are running painfully slow. I just reset the whole thing excluded all devices and am going to carefully add things back. I will know in the first few devices if things are still bad.

If that doesn't help, I'm migrating back to my c4 and going to wait it out.

I have unknown devices

By that do you mean devices in the Hubitat zwave details page that say unknown, or somewhere else? Just curious.

Yup. They are stuck. Not getting cleaned up by the nightly maintenance. No amount of clicking discover/repair/remove or even rebooting will get rid of them. They are just there.

I just wiped my zwave again. Started by trying to add an aeotec zwave repeater gen5 sitting next to the hub to a blank zwave list (did a full reset). It was stuck in the initialization and did the same thing with an unknown device.

The only way I could get rid of it was by doing a reset again.

I then tried to do a few inovelli gen2 red switches. Same issues. However restarts helped get the first two in there. But then the 3rd switch would not get added no matter what I did (reboot,power cycle etc)

In my logs I see this too.. "Z-Wave Network responded with Busy message." and "Z-Wave Inclusion timed out, status:7". I only had 3 switches all sitting in the same room next to the hub.

At this point I give up until its sorted out.

I can run any tests if you want @bobbyD. I have about 80 zwave devices and a blank zwave list to test with.

Yup. They are stuck. Not getting cleaned up by the nightly maintenance. No amount of clicking discover/repair/remove or even rebooting will get rid of them. They are just there.

Understood. I haven't seen that yet on my C-7, but will watch out for it. I'm maybe 25 devices into my migration, mostly Jasco/GE devices but a few others sprinkled in there too. No Inovelli or HomeSeer though.

I had multiple issues pairing the S2 capable GE Enbrightewn switches. But if it got stuck on initializing I rebooted, unpaired and tried again. In my case it would unpair successfully, so maybe that is why I didn't end up with unknowns - not sure. In the end I get them all paired successfully (non-secure - I only tried a few times to do S2 on them before pairing non-secure).

Yeah... I just tried doing a reset l, too. It is like it gets hung up all the time. Just unchecking all the security options does get me past that initial step, but it still hangs on "Initializing" and only sometimes gets past that and actually works...

It's weird that only some switches ask about security. The ones that don't ask pair immediately.

I played again with an old Aoen Z-Stick and everything paired immediately. But now some switches don't turn on via Zwave command. The paddle's LEDs light up, but the light doesn't turn on.

Everywhere I look, one thing works and another breaks!

I would love to use Hubitat, but it just won't pair some devices and is very troubling pairing others as well as sometimes just not responding... It's got me pretty worried.

Anyway, I'm on a tangent. Technically my original question was answered. I'll mark it as correct and open another thread if I need to.

I would love to use Hubitat, but it just won't pair some devices and is very troubling pairing others as well as sometimes just not responding... It's got me pretty worried.

This is sort of unusual. I can't remember a time where something like this happened in the 18 or so months I have been around here. I am guessing it is a perfect storm of new hardware, new chipset, and new software. This 700 series chip is still fairly new, this might be one of the first hubs to widely adopt it?

You might be having issues right now, but they will likely have it fixed soon. Hubitat has been very responsive to bug fixes in the past, and I don't see any reason they won't do the same with this.

"Likely have it fixed soon" is a quite a risk... it's basically unusable for me now, and so I can't really just sit on it and "hope" they fix it.

If it weren't for the constant "freezes" (no Z-wave activity until reboot), I could maybe struggle through trying to get stuff paired.

I had my hub lockup when there was a device that didn't pair correctly but after removing it and re-adding it everything has been humming along fine. Check Settings, Z-Wave Details and look for a device that doesn't have the info all the others have. If you do try to un-pair, factory reset the device, and then re-pair with all the boxes unchecked. They're actively working on the S2 issue.