Howdy. New to Node Red and trying to figure out the best way to do this with the Hubitat nodes. I'd like my lights to turn off when I turn on my TV (currently monitored via z-wave plug), then go back to their previous state when the TV turns off.

I have this mostly working by having the power monitor turn on/off a virtual switch if it passes a power consumption threshold (I tried skipping this by just using a switch node for if power >50v, but that kept triggering the flow repeatedly every time it reports).

Open to feedback on the entire flow, but as it stands right now the thing that's hanging me up is getting the flow to save the current state of my lights before turning them off, and then returning to that state. What's happening is that it just turns both lights back on, regardless of whether they were on before or not.

And here's how I have the Change nodes set up: 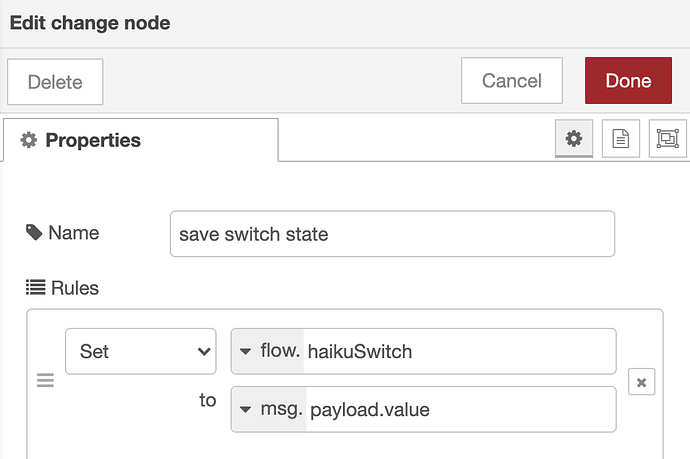 There is as node for this!

A Node-RED node that provides report-by-exception (RBE) and deadband capabilities.

but that kept triggering the flow repeatedly every time it reports).

Of course there is... thanks

And since you are going down the Node Red rabbit hole and might not have found this other thread, its a good one.

I'm opening this topic to ask if there's any reason to create a List of Modules for one's first installation of Node-Red. I ask because it seems there's a few new users to NR every few days and the Flows that are being shared often use a Palette item not on everyone's installation. Must Have: node-red-contrib-hubitat (Node-RED to Hubitat communication) node-red-node-rbe (continue down flow only if a value changes) node-red-contrib-noop (Simple placeholder node to help visualizations) Palett…

Thanks, I've definitely seen that...in fact, I already had that RBE palette installed, I just didn't know it - likely got it from that list.