Got a new phone

I switched from iPhone to Android and redownloaded the hubitat app, logged in, even have the same phone number. But for some reason now when a door opens while its armed the rule I set to have it notify my phone every 5 seconds doesnt notify me at all. It used to on my iPhone and also I was trying to figure out a way for how I can arm and disarm my system away form home, not having to use the IP? The app doesnt seem to do anything at all... Once I had to drive home again because it kept notifying my phone non stop and I realized the only way to disarm it to get it to stop was to go home and be on the IP in a URL and do it from there. Should I be switching to using Rule machine for just simply having window and door sensors, 1 keypad and an indoor motion sensor? I feel like Saftey Monitor should be enough but maybe I'm missing out on some feature I could be using. I just ordered a Siren in the mail also because when anything gets tripped I not only want to be notified but I want the one who tripped the system to be notified that I know. Btw everything is Zigbee and all my devices are comcast home security devices, except for the siren coming in.

It sounds like you didn't do one of these two things, either of which would work (but one of which is a lot easier):

Neither of the above is something you can do from the Hubitat admin UI; you'd have to do it with the app on your phone. When you logged into your Hubitat Portal account on your new phone for the first time, you should have been asked to choose whether you want to associate this phone with an existing Mobile App Device in Hubitat or create a new one. Either option would technically work, but if you do the former (the first bullet point above), you shouldn't have to change much. If you do the latter (second bullet point above), you'll have to switch out the device that your rules and other apps use.

By default, the Mobile App Device gets named something like the name of your phone (which on iOS is often something like "John's iPhone"). You can rename this in the Hubitat UI if you want, which you may want to do if replacing your iPhone with Android but re-using the same device in Hubitat. (Or, again, you could create a new one with the new phone and switch it out in your rules/apps.)

To arm/disarm your system manually without needing to use the admin UI (IP address in a web browser), you will want to use something like Hubitat Dashboard. You have to set up a dashboard manually (no "default Dashboard" is created for you), but then you can access it through the Hubitat app when home or away, or you can use a local/LAN or Internet/cloud link to access it directly in a browser. If you don't like Hubitat Dashboard, SharpTools.io is also built-in (subscription required for some features).

To answer your other question, you do not need to use Rule Machine to get notifications from Hubitat Safety Monitor. Each armed state can be configured to send notifications to you by setting up the "Text Alerts" option inside the configuration for that armed state (e.g, Armed-Away is my screenshot below). To repeat, turn on the "Repeat this alert message until cancelled?" option and configure it appropriately: 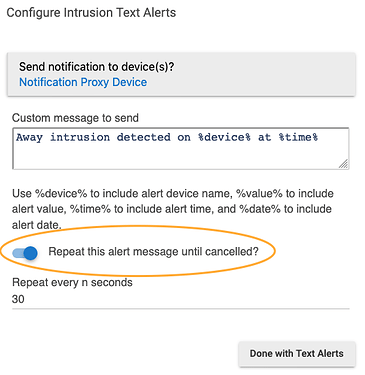 (To actually cancel this, you'll have to use either the admin UI, Hubitat Dashboard, or any automation you choose to send a "Cancel All Alerts" to HSM. It's an option from Dashboard if you add an HSM tile, for example.)

I prefer using HSM for this because armed states (and the ability to cancel alerts and the fact that there is an un-cancelled alert) are all sort of global, easily accessible states, which you'd have to manually recreate the effect of if using "pure" RM. That being said, for just the notification, you could certainly keep using RM if you want to, and you'd also get a bit more flexibility in terms of how or when they happen. But if you're OK with what HSM provides, that's my suggestion--all in one spot then.