Hello
I'm starting to learn Rules and it's fun! I can't find this answer so maybe somebody knows...

For a boolean global variable, is there any difference if the connector is a variable or a switch (other than dashboard display vs control) ie

Any help is much appreciated. Have a great Sunday!

A switch can be exposed to Alexa so that she can cause things to happen in Hubitat during Alexa routines. Global variables stay in rules.

Note that this isn't quite true anymore: a few firmware versions ago, we got the ability to create global (and local) variable "connectors," which expose them as devices. For a boolean variable, one option you have is to expose the device as a switch--so you can, in turn, expose that to Alexa (or use in any app like a switch).

If we think to a while back, there was a time before Rule Machine had global variables. Therefore, if you wanted something to function as one, you pretty much had to use a virtual device. Some people were also used to using these workarounds due to using virtual devices like variables in "stock" apps that had simple options for things like restrictions, where a virtual switch (for example) could effectively function as some sort of variable to control the automation in some way. And even after the introduction of global variables, there was a time without connectors, so a virtual device was still the only way to access them from outside Rule Machine.

The biggest difference nowadays might mostly be only in the history of each.

Hey
Thanks!
That sounds right since both GVs are Boolean it should only matter within the scope of what a virtual switch vs a variable is capable of - but to confirm I'll play it back - If I understood correctly then

See my pic to illustrate what I did with the two GVs with their variable type and associated connectors. 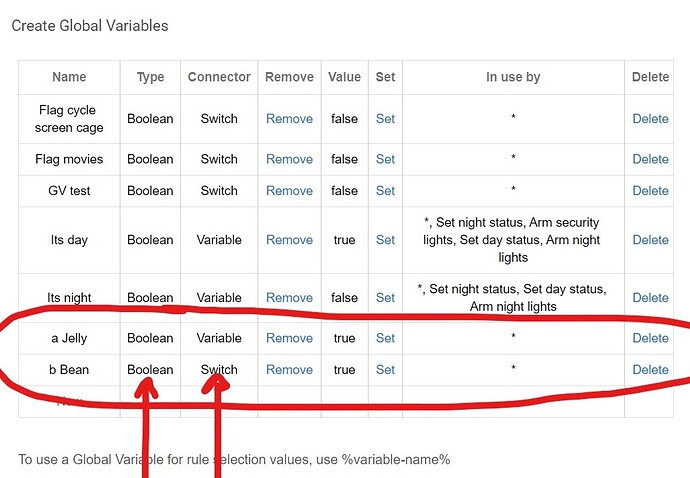 Okie Dokie! I think I got it... no diff unless you want to use the GV outside of RM or internal automations
Thank you!

Actually, with the appearance of "connectors" for global or local variables, even that isn't really a difference now.

Awesome... I was suspicious that I was missing something