This new lighting app looks great. I have a scenario that I have kind of working under the rule machines, but not quite as robust as I might like. Here's what I would like to have happen:

I have a rule in the old rule machine that does part 1. It also sets a delayed action to turn off the light.

For part 2, I have an event in the current rule machine that has a required expression for the sun bring down and the door being up. It then has a trigger for motion on the doorbell. The actions are to turn on the lights and turn them off 10 minutes later.

For the most part it works well. However, I noticed the other day that after I had closed the door, I went out to the garage not too long after I had closed the door. The light was off, so I flipped the switch to turn it on. A few seconds later, it turned itself off again. So I turned it back on. Then it turned itself off. After fighting with it for 3 or 4 times I gave up and used the flashlight on my phone. I suspect (though didn't take time to check logs) that there were a lot of "turn off" events queued up do to the motion while the door was open.

This new room lights app looks like it might be the ideal solution. But I don't see a way to have both my "always turn on the light when the garage door is opened" and my "only turn on the light for motion if it's dark outside and the door is already open" conditions as means to activate the lights.

Any screen shots of your rules?

It sounds like you have two different things turning off the lights, which are competing with each other.

Without a doubt I have two different rules competing with each other.... for the most part I can live with this, though I continue to tweak it. I was just hoping that the Room Lighting app would be a more elegant solution.

Here's the first rule for when the garage door opens:

And the second rule for motion on the doorbell: 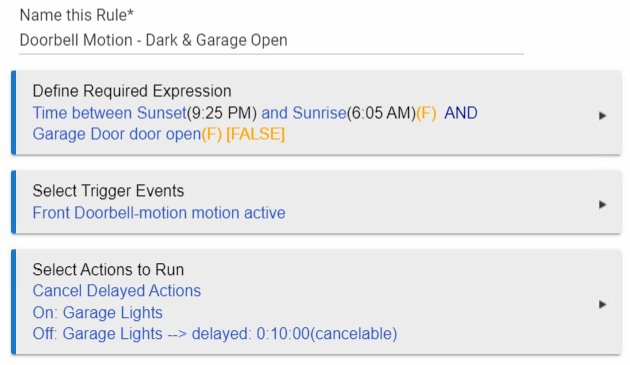 I added the "Cancel Delayed Actions" item after the events descripted in the OP in an attempt to solve the problem. I have not tested it nor do I know if it's actually the right solution.

You're rule is turning off the light 10 minutes after motion is detected. It it goes active and stays active for 10 minutes the light goes off regardless of motion. Rewrite like this: