Frequent alarms for no reason

So first let me mention I had a similar issue a few months ago. Then we were getting alarms even when the system was set to disarmed but the time stamps made no sense and some parts of the rules never ran. Usually it would turn on most of the lights but miss one. I had gotten some suggestions but never got to try any since the problem went away.

For the last few months the HSM has been pretty stable with some strange behavior but nothing too terrible. For instance sometimes arrival lights don't turn on but HSM was disarmed.

Now what we are getting is frequent false alarms. I can see time stamps that the wife was disarming at keypad (Iris gen2) and it would still go off. I confirmed she was waiting till the light on the keypad changed so really I had no idea why it started doing this again. A couple days later I thought we may have found the problem when with the alarm going off the keypad started strobing. When I looked at the keypad after work (batteries removed) I found it was still driving but batteries were low. After replacement the keypad seemed normal but false alarms continued.

So next I added a button in our bedroom to disarm the system. I figured this would give the system more time to actually acknowledge it was disarmed before she opened the door. This was working until this morning, when she got to the door she checked the keypad and it said Off like normal so she went out. Then the alarm went off. But based on time stamps I can't figure out why. In the screenshots below you can see the system was disarmed but it still went off. The times seem to make sense between button presses, door opening and alarm trigger but why go off? Based on this being such a step change I am wondering if is is caused by the updated hub software...thoughts? 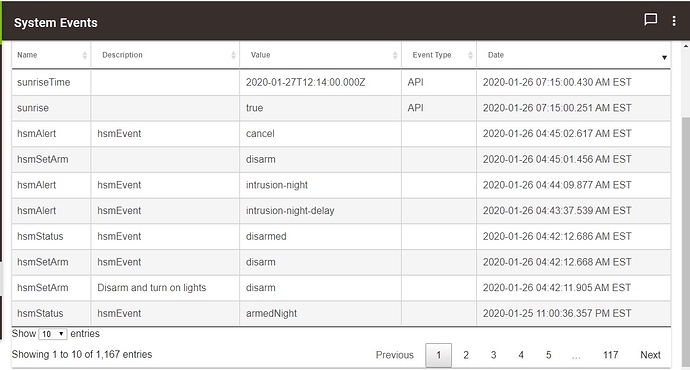 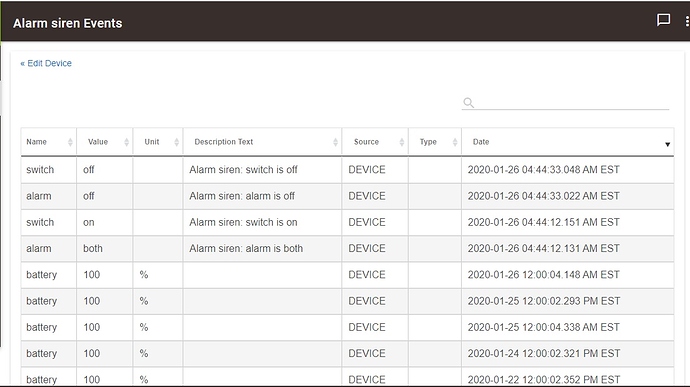 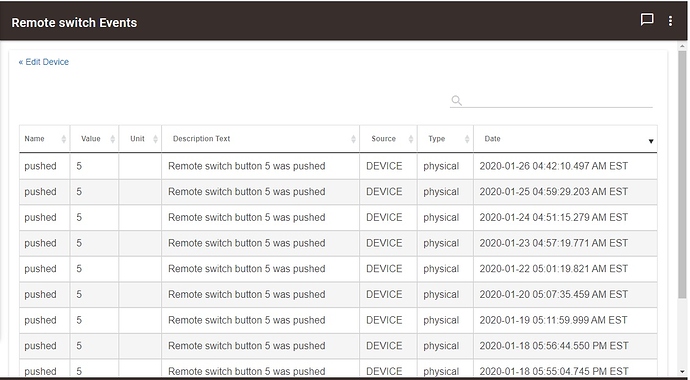 I'm not a programmer, so this is what popped into my noggin when you described your symptoms. I've had doors notify me up to 15 minutes later that they were locked. So, I've been experiencing some, shall we say, "wierdness" with behavior as well. Given the recent issues that have popped up, have you considered that there may be something else causing latency and trouble in your hub? The dashboards for one. There are specific known issues with them. Have you addressed that? The "use all devices" checkbox issue. Or that recently discovered peanut plug wreaking havoc on systems? I know it's not a direct answer for the issue, but I've been experiencing behaviors and this makes sense. Do you have some of the ill spoken cree bulbs on your network? I've just spent the afternoon excommunicating my peanuts. My crees are long gone and all of my dashboards are now fixed. As of today, I'm waiting to see if my latency, slow reporting, and hsm alerts subside. I know it'll take a day or two for zigbee to straighten out for me, just because I don't want to turn off my hub for 30 minutes to force it to repair. Just a thought. I'm definitely not an expert, but if you have any of that going on, I'd suggest eliminating the obvious first.

@april.brandt Thanks for the thoughts; I found a thread about hub slowdowns and I don't think any apply to me including the all devices and peanuts. Also no CREE bulbs or any other zigbee bulbs.

@njanda the keypad doesn't trigger, I have a Utilitech siren and the batteries were replaced just before Christmas so they should be good. I think the mesh networks should be good, nothing has changed in the network in months other than hub updates.

Looking at the system events I am still confused as to how it alarms. You can see it auto armed at 11pm the night before, then my wife pressed the button to disarm and run routine to turn on lights at 4:42:11. I had this button linked to lights so she would know if the rule ran. Then you can see the hub confirms it was disarmed at 4:42:12, so a quick response. Then she must have gone out the front door at 4:43:37 which triggered the intrusion...but why if the minute before it was disarmed? I am just so confused as to what could be happening.

I wonder if when you first set up HSM you made some settings, then deleted them then made some other changes etc which were not cleared perfectly and some remnants of code remained ? Therefore it sort of worked but due to firmware updates it’s got progressively worse, up to where it is now being problematic.
I’d be very tempted to remove and recreate your HSM config if it is not too complicated.