Just throwing this out there.. But it would be nice to have a panic button feature in HSM..

This is obviously what I would consider a low-priority request. So no pressure, just something to think about for the future..

I like this idea. What would HSM need to subscribe to? Dedicated button device(s)? Specific 'incorrect' lock code? I guess HSM would need to ignore any intrusion delays users might have set. Just asking for conversation's sake.

Yea.. Not sure.. Can’t find an appropriate capability either

Can’t find an appropriate capability either

There isn't one. The only thing that the panic button on the Iris keypads does is turn their sirens on.

You can do this with a virtual contact sensor where the driver also has the pushable button capability. But that would mean you would have to have HSM armed in some way 24/7. You would never be able to go to Diisarmed.

Not talking about iris.. Just a general feature request for an idea I have..

You can do this with a virtual contact sensor

Looking for a standard.. something that can be implemented across many devices..

Like I said .. it's a low priority request because there are much bigger fish to fry, and it's not something I want for me personally.. Just would be nice to have a standard for developers of security based drivers to implement..

Just wanted it out there so when HE staff have a moment it could be considered..

Looking for a standard..

But as you say, there is no panic button capability.

It's a request.. not looking for a debate

Totally get the request and it makes sense for easy access to the siren. In the meantime, it's easy enough via RM 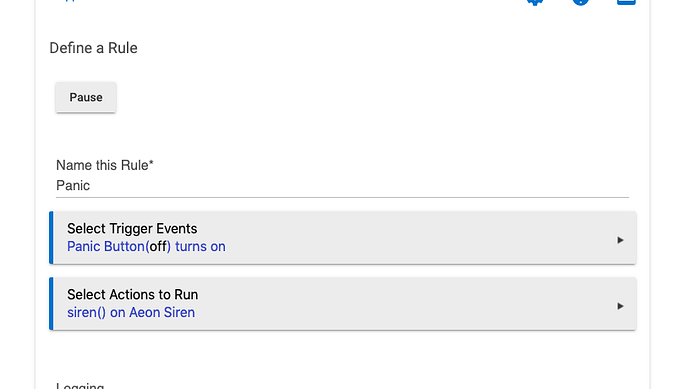 Not debating....just trying to tell you how to get what you want without having to wait for it. But noted. Won't bother helping again.

I like this idea. A button to trigger an HSM alarm would be useful. Of course you could set up a button to activate siren, lights etc as per the post above. But actually triggering HSM would be better because it would activate all related aspects of other rules/dashboards (for example I have an auto-off after 60 seconds).

That is what I envisioned when the request was made. I thought triggering an actual alert might be helpful for people that have monitored security systems integrated with HE.

Which you could do today with a virtual contact sensor/button. Yes, something implemented by Hubitat and fully integrated into HSM would be preferable. But that isn't going to happen today to be sure and probably not tomorrow. So, you can either wait and see if Hubitat decides to implement it and then wait for them to do so or you can implement it with a workaround today.

I don’t need a workaround today tomorrow or ever... It’s just a request for a considered future feature

Why do you have a problem with someone giving someone who wants this feature a workaround to get the feature now? Should we force them to not have that type of feature just because you want Hubitat to implement something you obviously don't really want?

No one saying you have to do anything. But shouldn't people have an option? Why do you get to dictate what options others get?