Do any of you use WiFi devices with h.e? What access point do you use?

I assumed hubitat did those wifi devices. I also run a homekit so I’d like to expand my WiFi, but since hubitat doesn’t do WiFi, I’ll ask in another forum.
Sorry

Assumed hubitat did those wifi devices.

Ubiquity here, and loving it. I have the USG and two APs.

I don’t have anything particular in mind, but like tp link Kasa devices and some 2.4 bulbs

If you don't already have these devices (or find their price or some other aspect significantly more appealing), I'd steer you towards natively compatible options instead. I don't think those TPLink devices are natively supported, though there is a community integration. Still, if you can find a Z-Wave or Zigbee alternative you like, it's likely to work much better with less effort and fewer potential for problems. I'm not sure what bulbs you're looking at, but the same applies, with the caveat that Zigbee bulbs (except Sengled) paired directly to a hub that also contains other types of Zigbee devices (motion sensors, etc.) is generally a bad idea due to issues with their performance as repeaters for such devices (Wi-Fi would technically solve that problem, but I think Yeelight is the only one I can think of that's natively supported; there are community integrations for LIFX and others).

This works really well for me...

Disclaimer: This is owner developed code without official association with Hubitat. *Version 4.3 Update Application features: Automatically installs the selected devices setting all data required to operate. Whenever opened, checks for device IP changes and updates the devices. Energy Monitor Note: The data presented in the Hubitat interface will NOT match that in the Kasa App: Power: Should be the same Energy: Should be the same; however, if a preference has been run on the current da…

I do have some WiFi devices around like Ecobee, Ring Doorbell, Yeelight strips, NodeMCUs (ESP8266 chips), Logitech Harmony hubs and Sonoffs. Only the Yeelights and Ecobee are supported "officially" by HE. All the others are controlled through 3rd party code and drivers.

I've been using that exact TP-Link access point at home and at work, they've been great! I highly recommend using the omada software to manage, especially if you have more than on AP. I run the management software on a an Atom based server without issues.

I have a ring. There’s an app?

Nope. What I do for my Ring is I use two Alexa Routines to trigger a virtual switch on HE when motion starts and stops. Then I have a RM rule that performs actions on motion or doorbell press. I used to have it also announce motion on my Echos, but it got annoying when a tree would blow in my front yard, so I removed that lol. 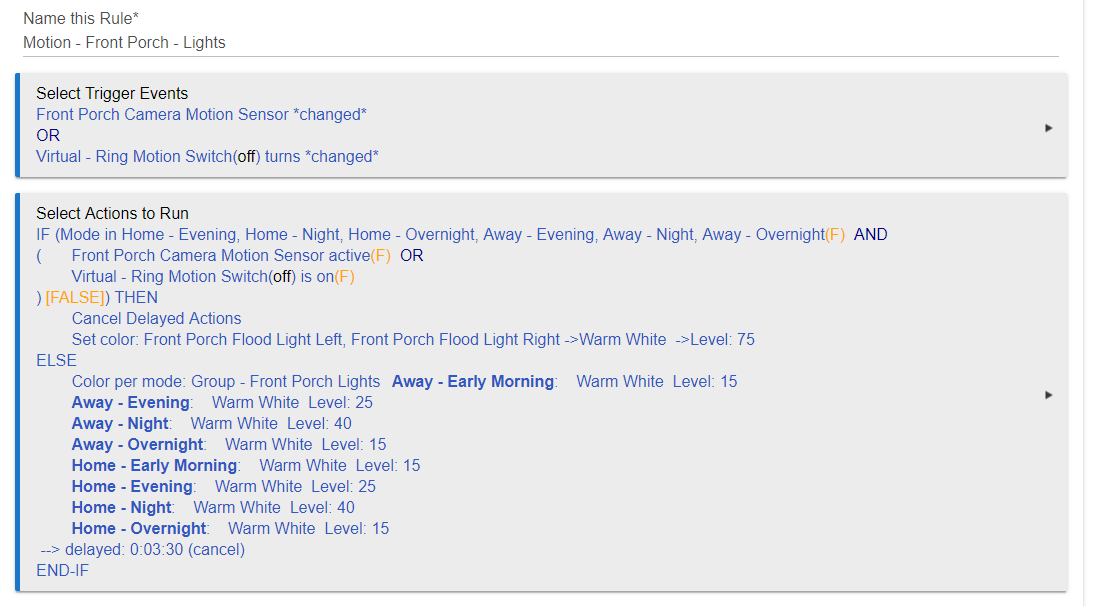 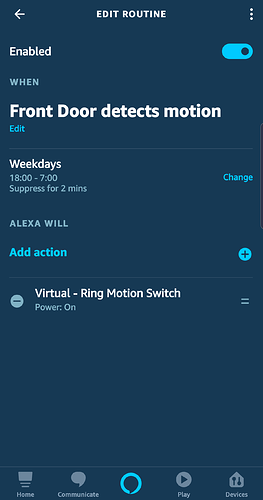 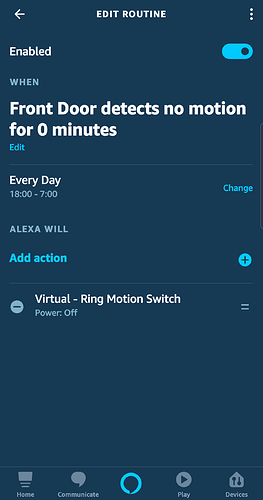 Bingo! Yeah, Homebridge would work in that scenario as well. Actually, from Homebridge I think it would be even easier as you could just create a virtual motion sensor and not have to bother with a switch at all.

Jumping in here---I use a ton of Wi-Fi devices.

Eero system on one of my hubs, and a Netgear DDWRT integration on my home hub.

I use Ubiquity in a couple different locations, and that's the most reliable network system out of those three, easily.

I use Eero with 68 devices connected without issues.

Everything plays nice with Zigbee and Zwave

How many Eero units do you have?