Delayed "and stays that way" trigger not firing after delay

UPDATE: after hitting "run actions on the rule, the app successfully completed the actions, HOWEVER, then I went and closed the door that I was using to test the rule, and got a hang up again.

Original Post
Haven't found any recent posts about this since rule triggers are now allowed to have a "and stays that way" (from now on known as ASTW) condition to triggering.

I have a simple rule that triggers when any contact sensor opens or closes, then if any are open, my virtual contact sensor reports open; if ALL are closed then the VCS reports as closed.

I thought it'd be perfect to utilize the new ASTW triggering feature. The logs look like it's being triggered but no action of "turning on."

Here is the rule setup: 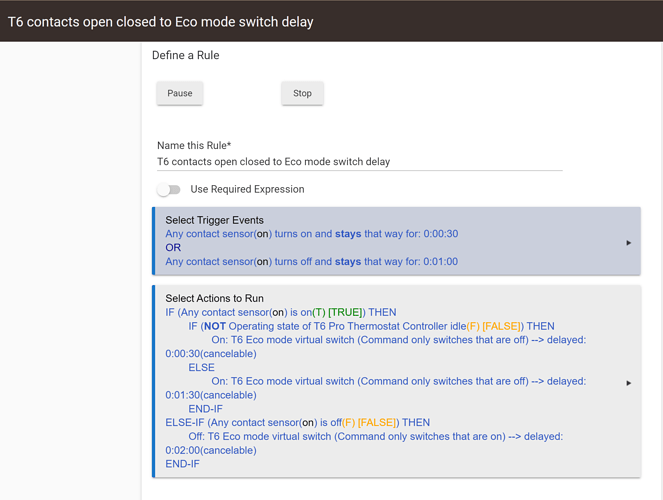 I'm still far from pro-status with RM but aspiring to get there. Please let me know what I'm doing wrong!

Your logs don't show the contact sensor having been open for the required 30 seconds tho, or any turning closed (the triggers) - so unless it did you'd not expect the actions to run.

Thanks for pointing that out. I thought it'd be implied that the any contact sensor rule actions completed as expected. Here are the logs specific to that rule: 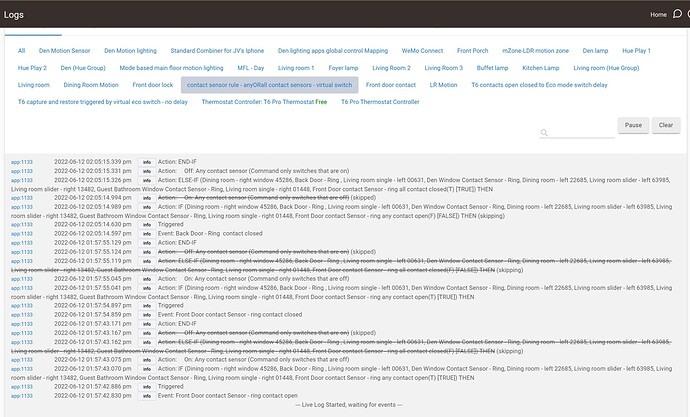 As you can see from the logs, I also opened the front door to get a package, when I closed it, the rule performed as expected and did not set the virtual (Any/All contact sensor) switch to off since the back door was still open

Sorry if it sounded like I was doubting your intelligence, but it does sometimes happen that a person will not understand these things.

Not at all! Gotta check all the simple stuff first. It's very possible I'm missing something else that simple, or just don't fully understand how this trigger option is supposed to work.

I appreciate the request. I probably would've put that in there on the first post, but didn't want to include too much content.

Hoping someone can help me see the light here.

@jwvincent2 I made this simple rule and I'm seeing what looks like a bug. Please let me know if this is what you're seeing as well. If not, I'll make an new topic for resolution.
If I leave the contact sensor open for the 30 second Stay or closed for the 1 minute Stay, everything is fine.
If I open then close the contact sensor before the open Stay has completed, the closed Stay time is incorrectly using 30 seconds AND the open Stay is completed even though the contact is closed. 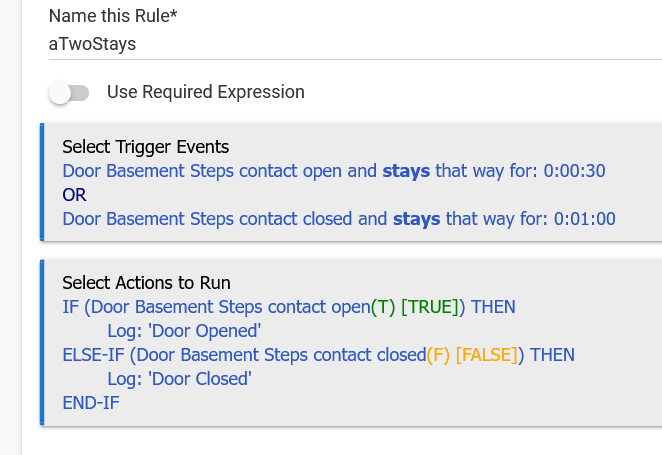 Thanks for replying @pseudonym.

My issue as it stands seems to be a bit different but definitely in the same realm. Mine is that the waiting action in the trigger never resulted in any further logs or actions well beyond the 30 seconds.

Yours looks like a bug for sure but I’m not sure if it’s the same issue. Your rule did actually continue with actions 30 seconds later when it should have.

when you shut the door which triggered again, the rule still executed based on the open trigger 30 seconds after the open event, even though the door closed should’ve cancelled the delay.

The strange thing I see with yours is that the door closed trigger resulted in a ‘still waiting’ action less than a tenth of a second after it was closed. Seems like it should just be a ‘waiting’ action and also should follow a ‘waiting cancelled’ action on the open door.

I will try to recreate the same issue when I get back to see if it’s possibly the second trigger that gave the rule engine a ‘jump’, but then it got confused.

@jwvincent2 A thought on a work around... or at least something to try.
Only use the Any contact sensor turns on trigger with your current stays that way
Remove the IF-ELSE-IF conditional statement (but leave the nested IF-ELSE)
Before the Off action, add a Wait for event for the contact sensor turns off with a duration of 1 minute

or make separate rules i believe the way you wrote it the two cases are stepping on each other..

Great feedback. I think I understand what you are saying here. The rule is working well now. Thank you!

Now the next step in the process seems to have a hitch, but I’ll move it over to a new post regarding the thermostat controller.