I am hoping to create a dashboard for some tablets mounted on the wall.

I am thinking about using tasker to load the dashboard after certain amount of inactivity. That way the dashboard is almost the homescreen for the tablet. I am then using google photos as the screen saver so it shows photos when not in use, but a touch on the screen then shows the dashboard.

I am not sure how else to make the dashboard appear as the homescreen. It would be great if hubitat had its own launcher where the homescreen was a particular dashboard as default but don't see this happening any time soon with the amount of work it would involve.

I am hoping to create a dashboard like attached (open attachment to see all 3 screens/dashboard). So the main screen in the first slide, where it is just showing the rooms. When the Projector tile in clicked it shows slide 2. When the Climate tile is clicked it shows slide 3. This makes things less cluttered as I tried with all switches showing on the single screen (no scrolling) but it just looks too hectic. Making area tiles ot then reveal only that areas buttons/sliders would look far less cluttered.

I would prefer to click an area, and it hide that areas tile to reveal the buttons below it. This would be far faster, as if I use dashboard links and have each area have its own dashboard then I find the loading is quite slow as in 5 seconds+ to load the new dashboard which I find a little slow for my liking. 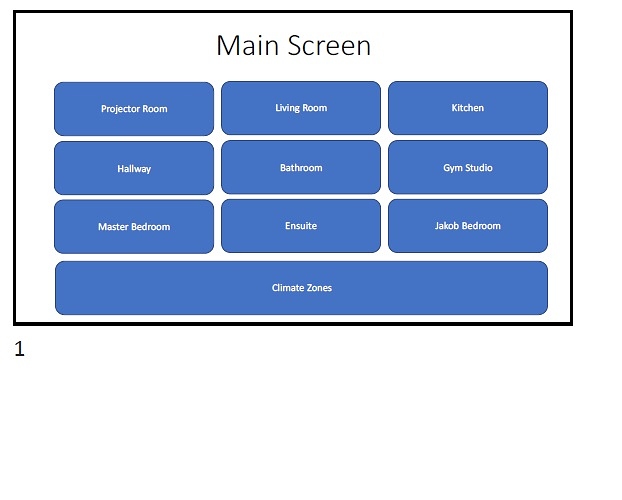 Take a look at Fully Kiosk Browser. Its very good as a dashboard app. You use it with the dashboard sync and can configure it to load at startup and prevent exiting and a lot more options. There is also a community integration that gives you some other nice options with it.

I have it setup to show my dashboards, but then I have it playing a slideshow as the screensaver from my photos.

Also, make sure you only include the devices that you will use on the dashboard and don't select all devices. This should hopefully help with the speeds.

Kiosk sound promising for more of a home screen experience.

I may have left all devices included when I first everything up so maybe that's why it's so slow for me to switch between dashboards. I can achieve what I want with multiple dashboards if they load quickly... So fingers crossed.

I'll come back and mark as solution later today when I get a chance to play around.

So Kiosk Browser work's really well. I have it start with the main dashboard. Can then navigate through all the linked dashboards. It's really fast as well. Plus google photos as my screen saver. It literally ticks all the boxes I wanted from a tablet controller dedicated to control and being a digital photo frame on the wall when not being used. Clicking the screen brings it almost instantly to the main dashboard.

I have 3d printed a picture frame that looks like wood. Time to get more tablets on the walls around the home.

Good to hear. There is a lot you can do with it but it does the basics very well.

I’m currently researching 3D printers too. I have a few small projects I want to get one for. Just doing my research first.