I need to add LED strips to two closets in our recently remodeled home. I've used these for a number of closet lighting projects in the past, and have been relatively happy with their performance, but it has been over a year since I've added any light strips and thought I'd check the community's current thoughts on LED strips for closet lights. Zigbee is preferred, but I'll keep an open mind regarding other options.

I have personally used a kit that included a gledopto zigbee controller. It seems to work well probably 99% of the time. On occasion though i do need to pull power from the device.

Another option could be a Govee led strip that supports Lan control. I use a variety of Govee devices and there is a decent integration available

That is the only current RGBWW strip I see and it doesn't support lan control at the moment. It does look like it will still support the cloud part of the integration though

I’ve had a surprisingly good experience with the Sylvania light strips. I don’t know if the 16 ft strips can still be found, they’re called Flex XL. Sengled also has 16 and 32 ft Zigbee strips last I checked, but I don’t have any experience with them. Make sure they say “Zigbee”, because they also sell a wifi version. If money is no object, Hue strips are very nice and bright.

This is the company i got my Zigbee device from

I got a GIDEALED RGBWW 3M strip and Zigbee controller from Amazon (for free as part of the Vine program). It seems to work great for me; I've got it temporarily installed in my kitchen pantry (waiting on me to have time to put an outlet into there - something I should have done when I had the kitchen remodeled two years ago).

The only annoyance with the controller is that it has faint green and blue LEDs in it that are always on. They are bright enough that they show up in the closet even when the strip is on. 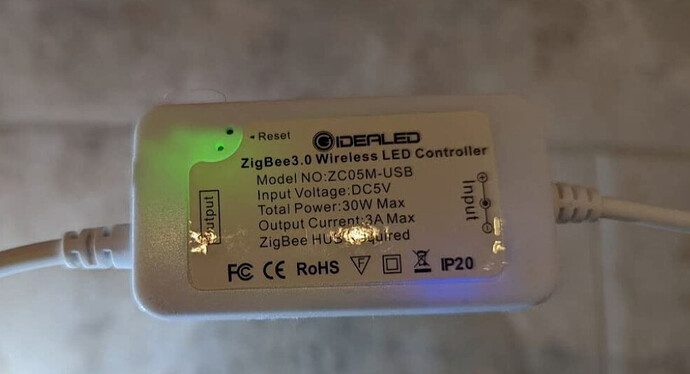 So I have used these for under my kitchen sink, and a lazy susan. The nice thing is you can either use batteries or power it from a micro USB port. using the micro USB port they are noticeably brighter. I power them using a battery power bank plugged into the micro usb port and it's a VERY long time (like maybe 6 months) between needing it charged. The motion sensor turns them on and off. I mention these because if your closets are like mine- I have no outlets to plug anything into.

I've got it temporarily installed in my kitchen pantry

That is exactly my use case. Our pantry in our new house didn't have a light, but it does have power. We have the 16ft RGBCCT LED strip run around of the door. It is activated by a contact sensor on the door. It really made a huge difference

I just use the $16 LED light strip with a zigbee outlet. This of course doesn't give you control over color or dimness but I didn't need those options. This picture was during the install and the strip wasn't glued down. There are no more hot spots just a nice straight edge mirroring the cabinets up against the cieling. I just finished this room for my wife. I really do need some "done" pictures. 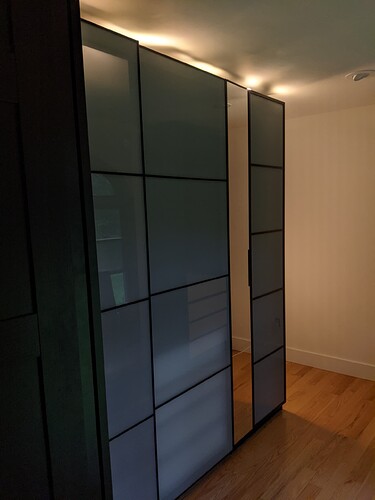 Edit: Updated with finished pictures. These are controllable on off via sonoff wall wart but they basically stay on all the time. 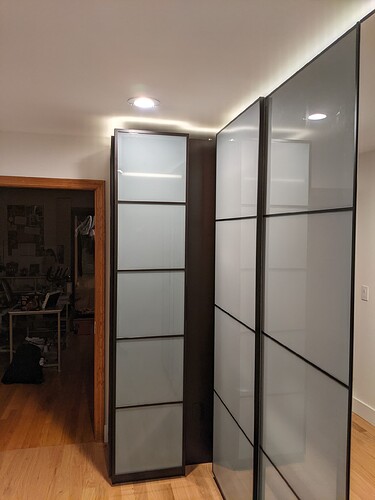 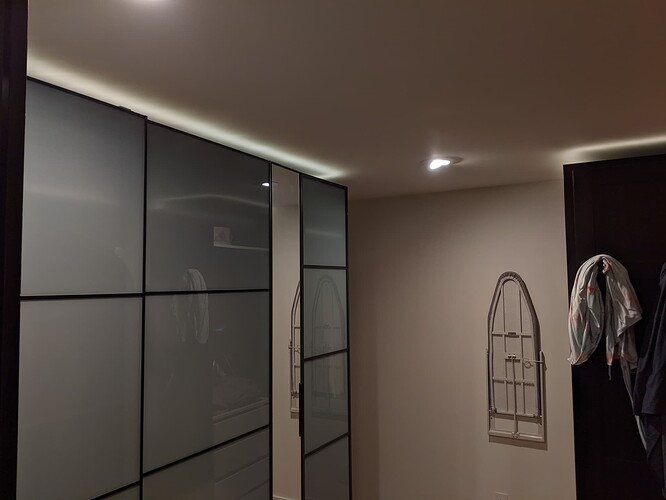 Zigbee is preferred, but I'll keep an open mind regarding other options

I'd skip the smart aspects on this. Simple all the way.

One thing the electrician did when he installed the Sylvania SMART+ LED strips (Zigbee) that I'd bought was that he put them inside an aluminum track with a diffuser cap, to even out the light and avoid hot spots.

I started using those aluminum strips after I did the first closet. Helps greatly with keeping strips from 'sagging', in addition to evening out the light.

We have the 16ft RGBCCT LED strip run around of the door. It is activated by a contact sensor on the door.

This is exactly what I want to do for a pantry and coat closet, did you find a kit or piece it together yourself? All I ever find is motion sensor stuff, but I want to use a contact sensors for 100% reliability.

The led strip and zigbee controller came together. The contact sensor was one i had for a while and was testing with to use as a diy alarm system. It is a visionsonic brand device i believe. The controller and contact sensor are zigbee. You can also use a Govee strip now that some of there strips are lan controlled.

Ah, I was thinking more along the lines of just doing a regular LED strip with a hard wired contact sensor, for cost. I don't really need to automate anything in the pantry besides the light so may as well be self contained. Could just get a no frills LED strip and then splice the sensor into the low volt wire.

Yea. That should do it.

Yeah, i use an IR sensor on the sliding door of a wardrobe. Easy peasy.

I have personally used a kit that included a gledopto zigbee controller. It seems to work well probably 99% of the time. On occasion though i do need to pull power from the device.

Another option could be a Govee led strip that supports Lan control. I use a variety of Govee devices and there is a decent integration available

Curious if anybody has an opinion about Govee versus Gledopto for outside flood lights. The product specs (power, color temp range, luminosity, water resistance) are virtually identical.

I think the big consideration is your preference of Wifi or Zigbee for coverage outside. And how robust of a setup you have for wifi or how good your zigbee mesh is.

If your wifi has limitations to the number of devices it supports it is probably best to avoid wifi Home Automation devices. It seems to be it wouldn't be to hard to flood a network with wifi devices if you started to get allot of IoT devices. If you have a decent setup that doesn't really have much of a limit for IoT devices then it shouldn't be a hindrance.

The Govee outdoor floodlights H7061 or H7062 are on the supported list for lan control so that eliminates the concern about rate limits or cloud dependency. The individual flood lights can be controlled and given different colors to create effects, but that isn't something the API's allow so that would still require that to be managed from the Govee Home App. The devices remember the effect though so then as long as you just turn the lights on/off it will remember the effect and go back to it. That is how I manage my outdoor Govee LED Strips. They are currently setup to the Christmias Scene. Now when the strip is activated every evening they just turn on that scene.