I have a long standing problem with my GE/Honeywell Z-wave Plus dimmer switches where they sometimes won't turn off or on when commanded. I have two GE 14294 dimmers and four Honeywell 39351 dimmers. I'm under the impression that the GE and Honeywell dimmers are identical and both made by Jasco. I also have an Inovelli NZW31 dimmer, Homeseer HS-WD200+ dimmers, Honeywell 39348 switches, an Inovelli NZ30 switch, GE 26933 motion dimmers, and GE 26931 motion switches in my house. All those that I mentioned work fine.

I've ruled out problems with automations (although I think rules that turn off/on alot of lights make it worse). The problem exists even when controlling the dimmers manually from their device page using the on/off command buttons. When control of a light fails, as in clicking the command to turn the light off, "switch" will equal "off" under the "Current States" section even though the physical light is still on. What is really weird is I have the physical switch's blue indicator light set to turn on when the dimmer is off. When the control fails, the blue indicator is turned on (agreeing with the current states section.) So the actual dimmer must really think the light is turned off, even though the physical light is still turned on! Once it gets it a failed state, clicking the off command again rarely has an effect, but occasionally it will really turn off the light. I have found that following a set level = 0 after a failed off command will usually turn off the physical light.

I don't think its a range or interference issue because these dimmers are throughout the house and many are adjacent to the other types of switches/dimmers that always work. On most of the dimmers I'm using JasonJoel's GE Z-Wave Plus Dimmer v1.8.0, but I've also tried the latest 2.3.0 and Hubitat's stock Generic Z-Wave Dimmer driver. All the drivers work the same. I'm currently running v2.1.5.124 of Hubitat. I think I've seen this problem in all the other Hubitat versions.

Has anyone else seen this problem with their GE/Honeywell dimmers? Anyone have any ideas as what could be the problem?

I just tried creating a rule that uses the state of a virtual switch to control one of these problem dimmers. The rule always runs an on or off command and immediately follows it with a set level 0 or 99 command. It's very reliable this way (100 out of 100 times). It's only 6 dimmers, so I guess I can use this hack. I'd appreciate you letting me know if you have seen this before or have anymore info. Thanks.

Has anyone else seen this problem with their GE/Honeywell dimmers?

Not in any way saying this to diminish your issues with them, but simply to answer your question .. I have about 25 GE 14294 switches in my home and never experience any issues with them. If I were to throw out completely wild guesses of something to look at ...

Have you done a Z-Wave repair? I'm with you that it isn't likely a range or interference issue since the LED does show the state you expect. But it won't hurt.

Is there any possibility at all that you have line and load reversed on the problematic switches? I can sort of see a theory where the switch might still work but in a bizarre way.

But before doing anything, I suggest calling Jasco. You are correct GE and Honeywell are both made by Jasco. I think they'd have some good ideas. I don't think this is Hubitat related at all since the switch is indicating by LED that it knows whether the load should be on or off; it just isn't switching it.

If the led light on the device is changing, but the actual light is not turning on and off then you have a defective switch or an incompatibility.

There is nothing on the zwave network or the hub that could make the device do that. It would have to be defective, or there is some incompatibility with the load/bulbs and that switch.

Try putting a regular incandescent bulb on the switch and see if the behavior is the same. If it's a bulb/load issue it will probably work fine. If not, could be a bad switch.

Also what driver are you using? The Built-in driver? Or a user driver?

Has anyone else seen this problem with their GE/Honeywell dimmers? Anyone have any ideas as what could be the problem?

I have many of the same dimmers and do have issues from time to time.

Here are some things to check:

Have you done a Z-Wave repair? ... I suggest calling Jasco

Yes, I've try doing a Z-wave repair multiple times with no change. I'll contact Jasco to see if they have any ideas.

It would have to be defective, or there is some incompatibility with the load/bulbs and that switch.

I thought about them being defective, but 6 out of 6 is a pretty bad failure rate. It could be the bulbs. The six dimmers control the following bulbs:

So I have several different bulb combinations, but all the GE/Honeywell dimmers have issues. I'll try some incandescent bulbs (if I can find some.)

Also what driver are you using?

Do the dimmers work as intended when controlling them from the physical wall dimmer?

What are the results from HE device, when you set the level to 99 then back to 0? Is it having the same issues when turning the dimmer On and Off?

Yes it has the same issue setting the level from 99 to 0.

Like I said in the first post, If I send a command to turn off the switch and then immediately send a level set 0, it always seems to work. It's really weird. I'm either unlucky (6 out of 6 bad dimmers) or crazy... probably both.

I'll post here if I get a response from Jasco.

Hmm... Do you know what firmware the switches are on? Jasco is notorious for changing switch/dimmer behavior in different firmware revisions (QUITE annoying).

For instance v2.1-2.3 of my driver implemented a number of workarounds for a new firmware version. It obviously didn't help you, though.

Maybe they changed something, and the drivers need to be updated to accommodate.

The ZW3010 definitely need a different driver. Although I would have thought that simple ON/OFF would have worked regardless of the driver used. If it is the new shallow models, try my GE Enbrighten driver (posted on here and github).

Do you know what firmware the switches are on?

How do I check to see which firmware the dimmer is running?

I pulled out the easiest one it was to get out. It's the ZW3005 model. I also confirmed that the line, load, and neutral wires were correct. 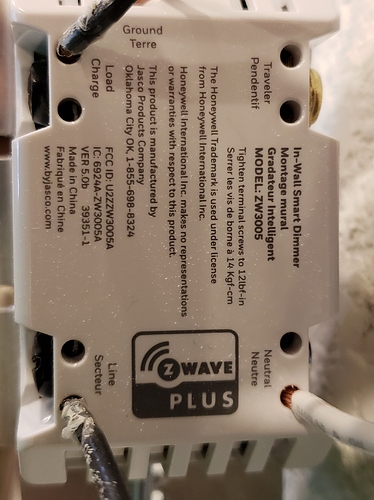 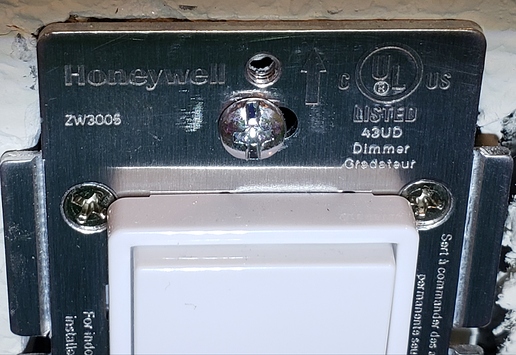 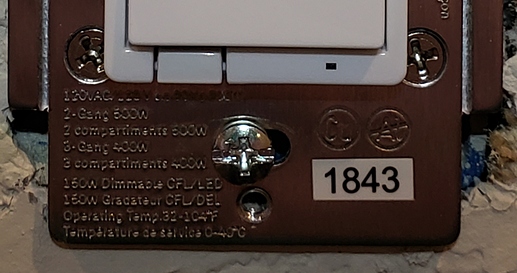 What do any of you have the configuration parameters "Z-Wave Dimming Steps" (Parameter 7) set to on your dimmers?

Excluding and then re-including the dimmers apparently reset their parameters back to default, or 1 step for Z-wave dimming steps and 3 (30ms) for Z-wave dimming duration (parameter 8). These default settings make the dimmer have a 3 second dim up/down rate. I previously had all my dimmers set with Parameter 7 (z-wave steps) as 99 and Parameter 8 (z-wave step duration) as 1 so I would have the shortest possible ramp up/down rate.

It seems to me that these Jasco dimmers have a firmware bug associated with Parameter 7 (z-wave steps.) I've done some more testing. I see this behavior will all my Jasco dimmers:

Can someone with a GE/Honeywell dimmer try this out to see if I'm crazy or not? I never set my dimmers below 10, so setting param 7 to a value of 8 works all the time and the ramp up/down rate is short enough at 125ms.

Mine are all at default - Steps=1 and Duration=3.

I'm just using the Generic Z-Wave Smart Dimmer driver. Not even sure how I'd check those parameters. Definitely have never set anything different from default.

@HAL9000 There is a Basic Zwave tool in the Hubitat Public github repository. You replace the driver for the device you want to make changes to with the Basic tool, make the parameter changes and then switch back to the original driver.

I was able to replicate the issue by doing what you said, setting dim step = 99 (parameter 7) and dim rate = 1 (parameter 8). Once I did that and clicked Off, HE indicated the dimmer was off but in fact the dimmer was still on. Once I set the dim rate back to 3 (default) while leaving the dim step @ 99, the On/Off worked again. The test was done using a GE/Jasco ZW3005 Z-Wave Plus Dimmer.

I also tried the same test on a GE/Jasco ZW3005 Z-Wave (non-plus) Dimmer but in this case the On/Off continued to work.

So I guess you're not crazy, well you might still be crazy but not in this case

Wouldn't be the first time there was a bug in Jasco's firmware... Especially on parameters that the majority of customers don't use.

Looks like I am running into this exact issue. Is there a fix for it or did support ever respond?

I did contact Jasco tech support (see their response below) about this back in Dec '19, and they said they had never heard of the issue. They suggested it was a weak mesh issue, so I didn't pursue a fix with them any further. I've been able to work around it by setting parameter 7 (z-wave steps) = 8 and parameter 8 (z-wave step duration) = 1. This gives me a fairly quick z-wave commanded turn on/off time of 125ms. As long as you don't set your dimming level below 10, you shouldn't see the problem.

"We apologize for the delayed response. What you have described is not a known or common issue for either of those devices that we manufacture. These devices do operate off of a mesh network, so I can understand why you believe it is not a range issue, however if there is any “damage” in that network, you can always try “repairing the Z-Wave network”. This is a common feature in most hubs and might resolve the issue. If you have already done that or simply cannot do that, then you can always try resetting those particular switches manually. That process is as follows: Quickly press ON (top) button 3 times, then, immediately press the OFF (bottom) button 3 times. The LED will flash 5 times when completed successfully. If all of this fails to help, then depending on the number of devices you have, we could send you a prepaid mailing label to get some back for testing.
Thank you,
Jasco Products Consumer Care"

Thanks so much for the quick response. I sent an email to support but will probably end up just doing what you have done. I sent param 7 to 1 on all my switches but will try upping them based on your settings. Appreciate you posting your results as I thought there was an issue with my zwave network for the past few months.