Throughout most of my house, I've been using the GE/Jasco Z-Wave Plus switches, and they've been great. I like the simplicity of their design, and how they mostly just look like a normal paddle switch. I like my smart home stuff to be unobtrusive.

Unfortunately, I had one switch location in the house that didn't have a neutral. It's at the bottom of a staircase going up to my attic office, and it controls the overhead lights in the attic. Those were originally flourescents, but I had switched them to LED tubes.

I had tried an Aspire dimmer switch that supposedly could work without a neutral. But it didn't coexist well with my LED tubes. They just flickered in and out, and the power to the Aspire switch wasn't even steady enough to join it to my z-wave network, so I couldn't adjust the min/max levels.

But I was reading about some of the micro/nano dimmers from Aeotec and Fibaro. Supposedly, they were much better about dealing with a variety of load types with no neutral.

And they had inputs so you could wire them up to whatever type of switch or button you like. So my thought was, why not get a dumb switch that behaves like the switch on a GE/Jasco, and wire it into a smart nano switch?

Ok, first question: What is the switch behavior on a GE smart switch? It behaves like two independent buttons - up and down. Only one can be pressed at a time. And it's momentary, so it always goes back to center. After a little research, the switch I needed was a "Single Pole, Double Throw, Center-Off, Momentary Contact Switch". And it turns out Leviton makes one in Decora style! The super specific switch on Amazon

My next failed attempt was with the Aeotec Nano Dimmer. It almost worked. Almost. Unfortunately, even though it had two separate switch inputs, it didn't have a mode to interpret them correctly. It ended up that both up and down on the Leviton switch acted as on/off toggles. But, other than that, it proved out the concept. The nano device did a great job of working without a ground, connecting to the z-wave network, and turning the LED lights on and off without flickering.

Then I read the manuals for the Fibaro Dimmer 2, especially about whether the inputs could be configured. And they could! It had a "window shade" mode that interpreted S1 and S2 differently!

The wiring for the Fibaro was ever so slightly different, but it only took about 10 minutes to swap and re-wire. Just follow the diagrams.

Finally, I used the Basic Z-Wave Tool driver to set some parameters on the Fibaro. (Although I now see that there's a community driver that would have allowed me to do this much easier.) The ones I set were:

And that was it! I now have a smart switch, with no neutral, that from the outside looks exactly like a normal Decora switch, and behaves exactly like a GE/Jasco switch. Only two small differences between it and the GE/Jasco switches: It doesn't have a status light, and the "throw" of the rocker is slightly deeper than the GEs, which are quite shallow.

And here's a picture of the wiring, to give an idea of how both the Fibaro Dimmer 2 and the Leviton SPDT switch are involved. 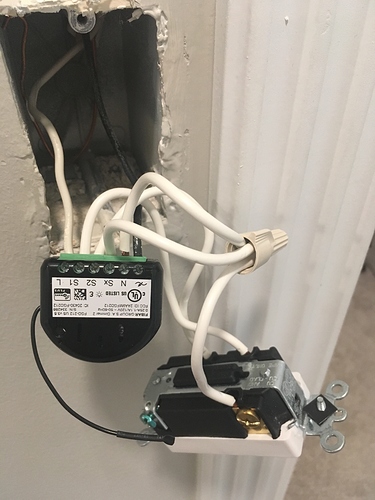 Finally, I used the Basic Z-Wave Tool driver to set some parameters on the Fibaro. (Although I now see that there's a community driver that would have allowed me to do this much easier.) The ones I set were:

What are the parameters? Which community driver would you have used otherwise?

This is the community driver that seems to have all the Fibaro's configuration parameters. I haven't tried it though.

Here is my attempt at a driver for the Fibaro Dimmer 2. All parameters listed nice a neat and I added syncPending state so users know when a sync has completed. Full operation tested including central scene ID's which can be read by webCoRE to trigger events based on the number of clicks. Any issues let me know!! [image] . [image] [image] [image]

The parameters I changed manually with the Basic Z-Wave Tool were:

There are other no-neutral switches. Lutron Caseta has been available for a long time. Inovelli has a Zwave device coming shortly (available for pre-order)

And to be fair, the Cooper Aspire one might have worked if my lights had been dimmable.

The Lutrons work amazingly well, from everything I hear. However, they don't match the basic decora style I'm going for.

The Inovellis aren't out yet, but the idea sounds great.

You are correct but the no-neutral switches currently available aren't LED light friendly. I tried Lutron but I didn't enjoy it for a few reasons. (extra hub, single pole application, cheap tactile feel). I've been following the release of the Inovelli but its release was recently delayed, the latest in on-going issues with the brand as noted by the Inovelli Founder so I'm not holding my breath. Kudos to @jwetzel1492 for Frankenstein-ing a no-neutral switch with COTS products!

This might be a dumb question, but I've never done a 3-way config with ZWave, our new home was built in the 80's and has no neutrals anywhere. Do the add-on zwave switches require a neutral, or just one? Can I do this for 1 switch and use add-ons for the others and not need neutrals? TIA

Do the add-on zwave switches require a neutral, or just one?

Depends on what brand you are talking about and if the Add On Aux switch is required. GE Jasco Aux switches do require a neutral for example. Other brands like Zooz allow you to use your “dumb” switch as the Aux switch.

But back to the GE Aux switch, it only uses 2 wires so if your master switch has a neutral and there are wires directly to your Aux, vs going through the light, you can often modify the wiring to “send” neutral to the aux switch.

Happy to look at pictures of your wiring of master and Aux boxes to help. I will need clear pictures of the box with switch loosened and pulled out (but not disconnected). Seeing where wires go from the current switch and out of the box is important.

Should I paste them in the thread, or DM you? Don't want to clutter things up.

Should I paste them in the thread, or DM you? Don't want to clutter things up.

Should I paste them in the thread,

You can hide the pictures so they don't make it a scrolling nightmare. Highlight the picture code, click the gear button in the editing bar, and "Hide Details"

This is something hidden.