I will be getting Comfortex motorized cellular shades. Switching to another brand is not a possibility as these met the household criteria of room darkening, available in TDBU and motorized, and affordable. They do not, to my knowledge, work off of either zigbee or zwave.

I was advised their remote frequency is 433.92, which I hope is accurate but cannot confirm.

My goal is to connect the Comfortex shades to the Hubitat. I've googled around, but would appreciate any insight anyone has on the below:

The operational goal is
a. Some shades primarily only raise / lower the top down portion automated via a set schedule to a preset location.
b. Some shades close via automation at night if they are open, but open in the morning only via a manual button press.
c. All shades can be controlled manually at any time, but the scheduled opening/closing functions will still execute if needed.

Is there some other way to just convert from 433 to Zwave or Zigbee?

I use a Sonoff RF Bridge flashed w/ Tasmota software that listens for messages from my 433 Mhz water sensors and sends the information to HE using Node Red. It doesn't convert to Zigbee or ZWave. The Bridge send commands to my Christmas projector lights that have a 433 Mhz remote and I have a Sonoff 433 Mhz remote that I use. It's probably a little more complicated than you want to do. However, if you are interested, I can point you down that rabbit hole. Someone else might have an easier way to get from the Sonoff RF Bridge to HE. 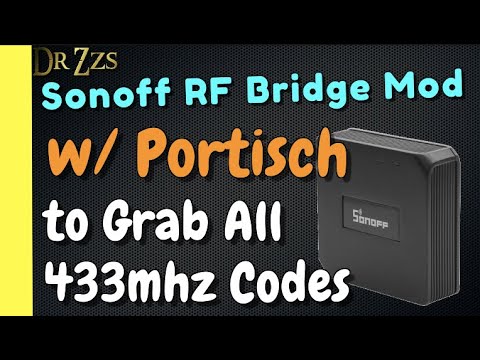 Just so you know they have revved the Sonoff RF Bridge to version 2.2 and it is no longer compatible with Portisch. The box it came in still calls it V2 so it's difficult to find one of these originals.

I'm posting this in September 2022 in case it helps someone else researching this issue.

As noted above, my household's aesthetic requirements were for very wide (just under 96") cellular top down (which typically also requires the traditional bottom up function) motorized blackout shades with as small a headrail as possible.

I ended up buying the Motorized Cellular Top Down / Bottom Up Comfortex (Hunter Douglas) Blinds / Shades from Blinds Express, and using a Bond Hub to integrate them with Hubitat. This solution cost $1000's less than I was quoted for Hunter Douglas blinds, and as far as I can tell has similar results. So far it works fairly well, although the system is a bit "duct taped" as noted in details below.

I was unable to find any shades meeting all the requirements with a Zigbee or Zwave motor. The Blinds Express shades are rebranded Comfortex, which are apparently the Hunter Douglass budget brand. I could not select the top premium fabric because it is heavier, and one of the shades was too tall such that the weight exceeded the motor max by 1/2 lb. I ended up stepping down one, with 3/4" single cells.

I decided to automate them via the Bond hub instead of the Simplicity NeoSmart Controller sold with the Comfortex blinds because there is now an official Bond Integration for Hubitat, so I reasoned that would be one less friction point. Also, the Bond Hub is less expensive, is more popular so more information about it on help forums, and it supposedly supports a wider array of other devices.

The blinds have a 433.92 remote, labeled BF-415 that pairs with their motors. These particular blinds have the small (1.5") headrail, so the motors do NOT have the bluetooth capability that Comfortex's "ColorLux" line has. That ColorLux line headrail is about 2.5". I was able to pair them with the standard (not Pro) Bond Hub by selecting the Bond BF-305.

Neither the Bond or the HE seem to have a setup for TDBU blinds. Since my blinds are top down/bottom up, I have to pair the top rail as one blind, and the bottom rail as a second blind. The only function this impacts is the ability to have the top and bottom rail move at the same time. For my use case, as long as the blinds end up where I want them, I don't care about this. If I did, I could probably write an automation in HE that would get around this shortcoming.

I initially tried to do all the automations in HE.
The automations for entirely closing the blinds work great. Since the only way these blinds are typically opened in my house is by lowering the top rail - either partially or all the way to the sill - I can effectively close them by raising the top rail all the way. One peculiarity is Bond and HE use the terms Open to signify the rail rising up, and Close to signify the rail lowering. Thus, to raise the top rail to the fully closed position, my automation has to tell it to "Open". I cannot find any way in either Bond or HE to reverse these.

It turns out that it does not matter what state either the Bond or the HE thinks the blinds are in; I can still get them Closed by sending the signal to raise the top rail all the way (which as noted above is an "Open" signal since this is the top rail). If it is was already raised manually, nothing happens when it gets the HE signal. If it was halfway raised manually, the HE signal raises it the rest of the way; if it was all the way down, the HE signal raises it the entire way.

Since the BF-415 moves the rail incrementally if the button is just tapped, and requires a press & hold (for about 1/2 second) to continue moving the rail, my HE automation repeats the command three times, each one 1/4 second after the previous. This seems to be sufficient to mimic the press and hold to close the blinds.

Opening is more problematic at the present. I would like to open them halfway at a certain time. This could be accomplished by either moving the rail for x seconds then pressing stop, or moving the rail to a preset position. The HE does not currently have a stop button in the official Bond integration, nor does it have a preset button. So I am currently using the Bond App, which does recognize the preset button, to open them halfway.

Hope the above helps someone else trying to automate td/bu cellulars.