Here is a pictorial view of how channels can overlap and affect each other.

I've set my router to use channel 1 and my hubs to use 18, 20 & 22.
This work OK for me but of course everyone's experience is different.

Just as an aside, I had smart gas and electricity meters fitted awhile ago and this totally trashed my zigbee network. Had to move my zigbee channels about to get the best stability.

I have zigbee meshes on channel 20 and 25. Everything has been working well - so I think going by the suggestions in the frequency spectrum chart you posted is a good idea!

Linkind sensors are available in the UK

Heck with zigbee 3.0 get on ebay and find bulk Centralite or Iris sensors. Can be had for about 5 bucks are are rock solid.

Not in the UK

Not zigbee, but all of mine without exception are WiFi based nodemcu's // konnected and cheap magnetic reeds.

Work to perfection and cost virtually nothing.

I have a huge bag of Original XIAOMI AQARA sensors

Well then you have a huge bag of really reliable sensors right under your nose. All you need to do is add Home Assistant, a ConBee 2 stick (or similar recommended) Zigbee controller and Home Assistant Device Bridge in-between the sensors and Hubitat. They pair in seconds and are rock solid. You would honestly spend a lot less time, frustration and money just setting up HA as a bridge for devices, than you'll spend on a bunch of new contact sensors.

As an extra reward for your minor efforts and a little bit of cash, you'll get access to a tonn of really good sensors that otherwise don't play nice when joined directly to HE. I really love the combination of the two. I hate automatons on HA, but love them on HE. I previously had a lot of trouble with Aqara, Mijia and a host of other low cost sensors on HE, but the ConBee 2 just happily pairs in seconds and doesn't let go. Only devices that still give me trouble pairing are IKEA. They stick once joined, but most of them (especially their repeater) put up a huge fight when you try to join them to either platform.

You wore me down (and I need a small project to distract me from other stuff) so I've ordered my ConBee 2 and will be pestering you (INCESSENTLY!!) as soon as it arrives.

LOL. I wear neither a girdle, nor a substantial belt.

As an alternative to HA, zigbee2mqtt works very well too if you only need it for sensors. It's not hugely resource intensive AFAIK and should run fine on a pi 2 zero rather than have to use a pi 4 (albeit if you can find a pi 2 zero these days).

I wear neither a girdle, nor a substantial belt.

Of course I know that, I received the pictures you sent.

I have things mostly ready, but just remembered that my iPad that is my home hub is over at my Mom's house and needs to stay there for a while, so not sure when I'll be able to set things up this way.

And get something on your loins, puhleeze.

I have several pi's available, so could get zigbee2mqtt up on one of them. Just need the cookbook to do the setup.

But I have HomeBridge running on one of my Pi's already, and Home Assistant Device Bridge and HomeBridge V2 on my C7, so that's all ready to go, so to speak. Just need to get my iPad back...but that may be a while.

iPad that is my home hub

could get zigbee2mqtt up on one of them. Just need the cookbook to do the setup.

Just followed this video and got it running

You mean HA/Home Assistant Device Bridge? Homebridge and HADB are completely different. But I run all three plus two production HE hubs. If one thing can't do what I want or bridge the device I want, there's a really good chance the other will be able to.

BTW:
I found many posts saying the stating same issue I was having getting Zigbee2MQTT web UI running (502 bad gateway). For me the issue was that despite what the docs say, I could not keep my ZHA integration enable at the same time as the Zigbee2MQTT integration. As soon as I diabled the ZHA integration and restarted Zigbee2MQTT, I was able to open the web UI so I could join devices.

If it helps, I'm not running my MQTT broker on HA. It's running on the Mac that is also running Homebridge and my Insteon server. So configuration was slightly different than in the video. Here's what it looks like with a remote MQTT broker and ConBee 2. 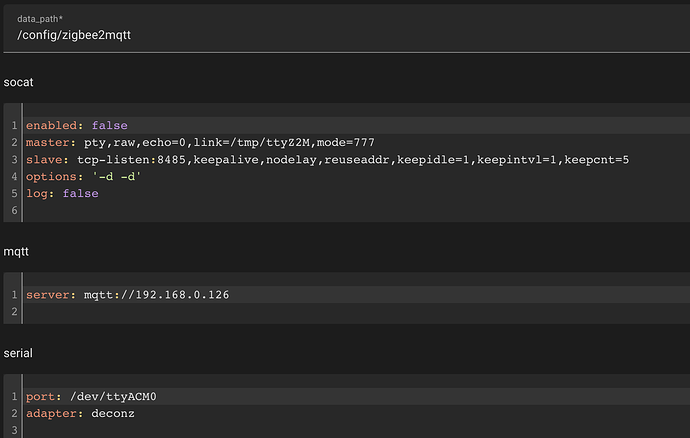 Not to drive this thread too far off topic (it does still relate to inexpensive contact sensors in a roundabout way), but I'd like to ask a few of the MQTT vets like @aaiyar why there's so little info with Zigbee2MQTT? For example, an Aqara sensor only shows open/close. Compare that to ZHA which shows open/close, temp and battery. 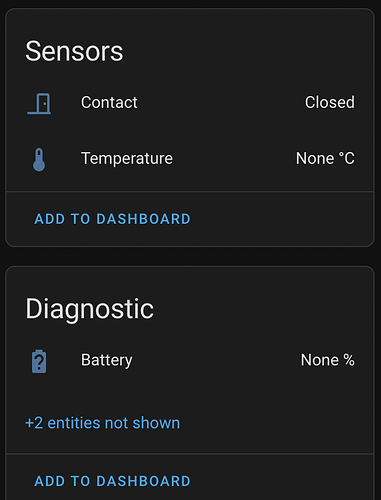 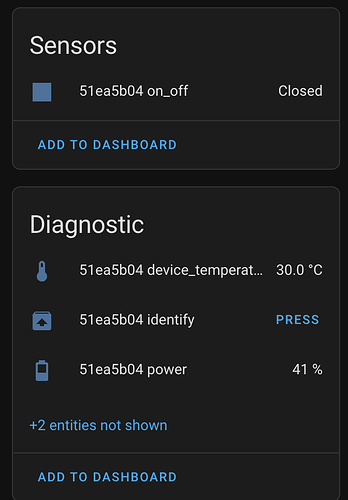 Not a huge deal, but the friendly name is anything but, and it took quite a bit longer to join with Zigbee2MQTT, versus ZHA which takes about 1 sec to join most Aqara devices.

I already have the following channels in use, would you say it's a good idea to add another to the mix?

an Aqara sensor only shows open/close.

This shouldn't be the case. If you check the supported devices list for z2m the Aqara MCCGQ11LM for example exposes battery, contact, temperature, voltage and linkquality. These are shown in the exposes tab for each device. All my battery devices will show battery % for example (FWIW!)

Let me repeat what @rocketwiz wrote. Here's the information that zigbee2mqtt has for an Aqara contact sensor that I bring back into Hubitat as capabilities or attributes. 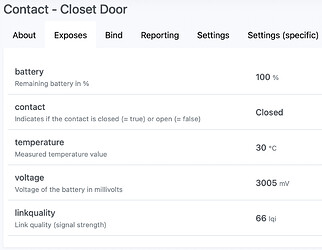 I'm not sure why that information isn't showing up in HA.

Odd. As you can see from the screen shot of the z2m device list, it’s not show up there first, so the HA entity does not get it either.

Maybe a bad pairing. I’ll try it again today and see if it’s a different result. Thanks.

Maybe. Also, it is possible that you have a different version of z2m.