Can you sort your Rules from the Rule Machine to your liking rather than alphabetically?

in HomeAssistant the sorting is a bit restricted to just by alphabet and by date
so now I need to switch over to NodeRed to make things look less messy with the amount of Automations (rules) I have in place.
What about Hubitat? Can you sort them how you like without any restrictions?

No, the apps list--including child apps like rules under the parent app like Rule Machine--are sorted alphabetically by name by default (technically you can also sort by any column, but the only other one of use is the underlying app name, e.g., "Rule Machine" or "Rule 5.0," which is probably less useful). Parent/child apps are grouped as such, so your apps won't be all over the place--e..g, all rules will be under "Rule Machine," all Motion Lighting instances will be under "Motion and Mode Lighting," etc. Further, most apps give you control over the name/label of the app, rules included, so you can ultimately make this sort however you want if you are careful with this naming.

Here is a quick look at the "Apps" page on my test hub if it's helpful: 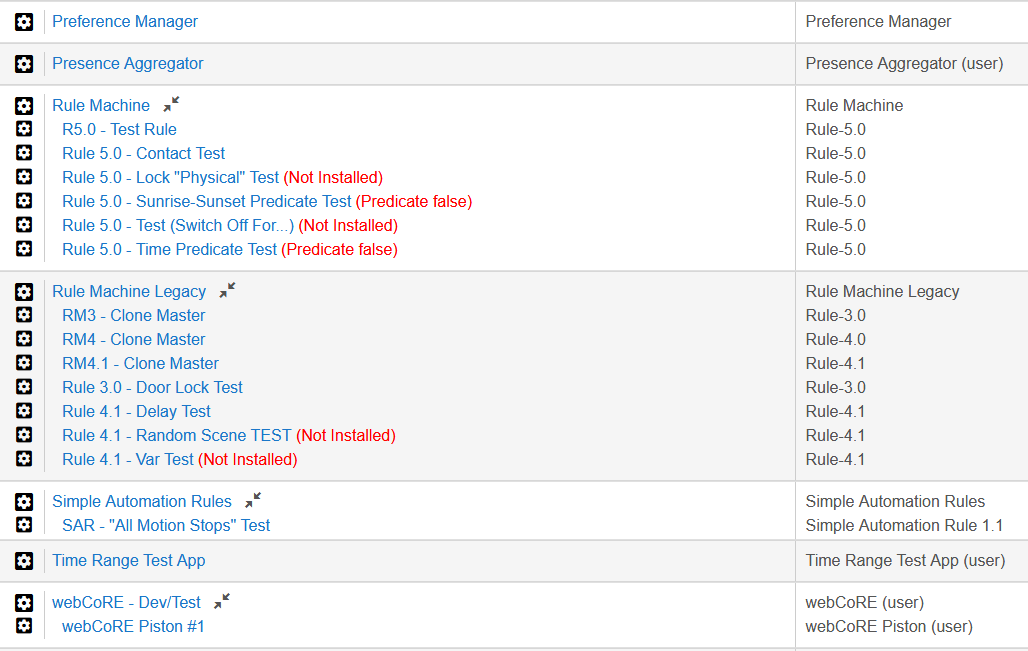 This is my test hub, so the apps are a bit unusual, and yes, I'm aware that I never really installed half the rules I began testing, but the list is more or less the format you'd see.

I should also note that even on my "real" hubs, this isn't something I look at every day and can't imagine it being a dealbreaker for me either here or on Home Assistant (though it should be noted that Hubitat has the concept of "apps" so not all automations are rules/scripts you have to write all on your own, though Rule Machine--one of many built-in apps--comes close to that, and again, parent/child grouping is present and many apps use this structure).

I should also note that there is an alternate "grid view" that I believe it defaults to on mobile devices, but I generally prefer the list view: 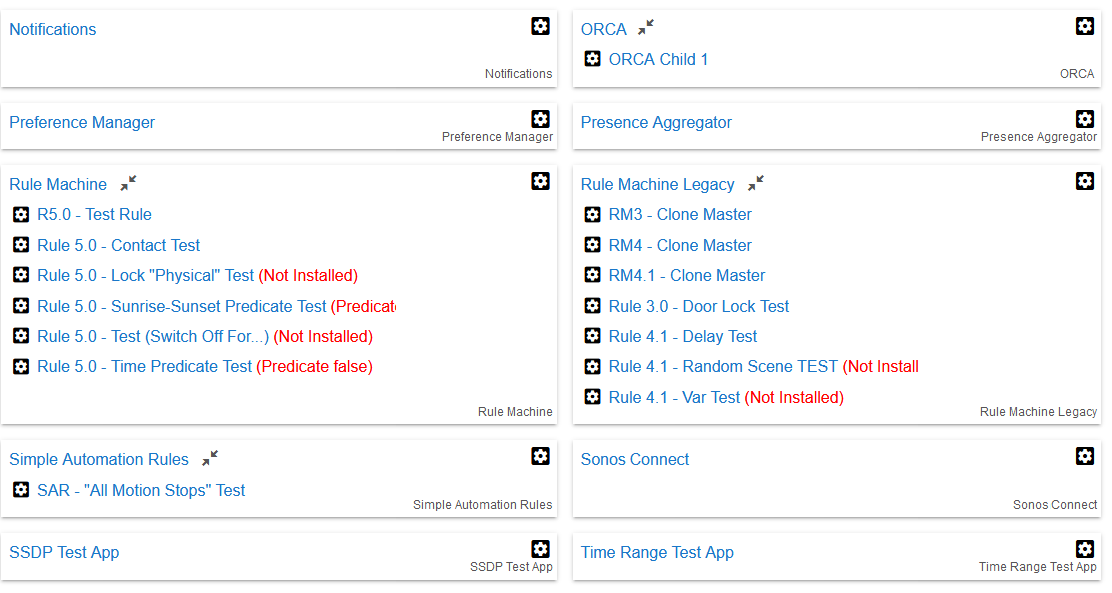 Maybe use icons in the rule title.

Or any other prefix to group rules, I’m using numbers for mine.

I put the room they represent first. Works pretty well for me

do that too, but it still got a bit messy for me with my large number of automations

I tried to have a naming convention but it's still unwieldy. I would hope some sort of collapsable folders are added at some point.

I think people who come from other systems have different experiences of how rules and automations work than how things happen in Hubitat.

I have probably at least 50 light switches of various types, an equal number of buttons and sensors, some outlets, a few presence devices, and a few LED controllers. More than 250 devices in total. Everything in my house is automated, the motion and contact sensors turn lights on and off, presence triggers certain rules, and so on.

To do all this I have approximately 75 items in the Apps menu of various categories, some simple rules, some button rules, some rule machine rules, dashboard setup, and so on. I keep seeing people that come from (insert hub name here) say "I need over 300 rules to do everything" and I cannot imagine why they need that many, or how you would keep track of that many rules.

Maybe my setup is more modest than most on this forum? I would be interested to see what other people say. I think you will find you don't need as many rules with Hubitat as you would other hubs.

But I agree with the opinion of what everyone else who has responded has said. I have no problem sorting things in a logical manner using something like the names of rooms and having things under the broader app categories like shown in the screenshots above.

I only have 65 devices and about 90 rules for them. Part of that is because I find it easier to create 3 or 4 rules to do one thing. For example, my bathroom exhaust fans have 5 rules total. I could probably combine them all into 1 rule, but my head would explode and I don't have a rule to send out my robo vacuums to clean up that mess.

What would be nice tho, is with the rooms feature if we could sort rules by rooms. This would make it a little easier. But honestly, it's not that big of a deal either way to me. Once the rules work you don't really have to look at them much anymore.

I was thinking about this again for some reason and realized I forgot to mention another feature: searching. You can use the search box to filter the list of apps (or devices) when you're looking for something in particular:

You can, of course, also use your browser's built-in search feature if you want (though that will not filter).