Can these WIFI bulbs be used with Hubitat?

I have had these bulbs for some time now: 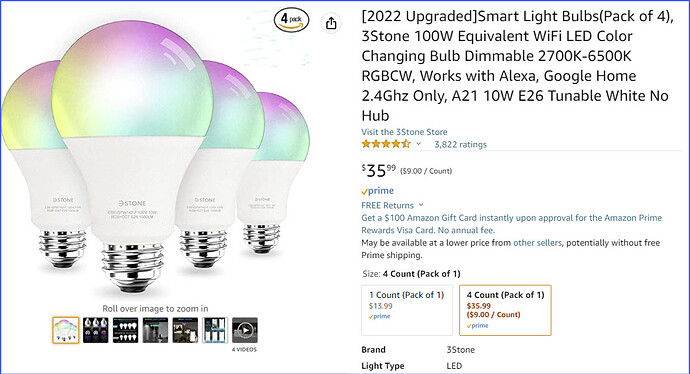 The lighting is great and I'm happy with the different colors I can get out of them, but the reliability has never been good. Some turn on when they should and some don't. Conversely, the reliability of all my lights working with Hubitat is rock solid.

Is there any way I can get Hubitat to control these lights? I know it may not result in any more reliability than I have now, but I figured it is worth a try.

I do not believe that they are supported locally. other options depend on how they are currently controlled. If you are already having control reliability issues, you are not going to be better off by anything you can do in Hubitat to virtually connect (the weak link still exists).

Get the "Tuya Smart" app. Reset the bulbs and set them back up using that app. Then use the Tuya Cloud integration.

If you want Wifi bulbs, get Lifx. They have superior color and brightness and are 100% local with the built in Hubitat integration.

The best color bulb in my opinion for Hubitat is the INNR Zigbee bulb. It is not much more and is 1000 times more reliable. It also dubs as a Zigbee repeater.

If you do want to use the Wifi bulbs you will need to download the third party Tuya Cloud Integration. Most of the these LED bulbs are Tuya even if they do not say it. You will be using the cloud to communicate and it will not be local.

Again do yourself a favor and do not buy them.

You might be able to, kind of. Relies on having G.Home or Alexa.
What I've done is as follows.
I have a Shartlife Zigbee Hub and some older WiFi Shartlife bulbs. Since my Google home can see my (Hubitat) sockets etc and it can see my (Shartlife) WiFi bulbs I can use G.Home as a network layer so I can have Hubitat talk to Shartlife via G.Home (or Alexa if its remotely usable, mine has gone bloody bonkers).

It all depends on what you want to do. One old bulb is ruled in G.Home to turn on red or yellow. Red when the Hubitat socket controlling the heating in Priscas room is on, yellow for the Hubitat heating in the other part of the flat. Another indicates if Prisca is basking. The other two are Immersion on and Prisca humidity level. So you have hubitat device > G.Home > G.Home automation(s) > Shartlife WiFi bulb.

Its kind of like a HA version of the TCP/IP protocol suite...

All the items and protocols in level one, compatible with level two, can't necessarily talk directly with level one (my zigbee bulbs being on the zigbee hub, as are the RF/IR controller etc and they can't communicate directly with the Hubitat) but they can interact with each other via level two (under the abilities provided by level two, ie you can't get a hubitat automation to run under G.Home).

It isn't exactly pretty but then neither is TCP/IP exactly - but they work. How the idea would scale to a huge system I don't know but it saves chucking old stuff out, you can use it for simple telltales and indicators on high current draw devices or doors/windows being open etc..

It will go both ways or multiple ways depending on what systems you have rigged that can talk to G.Home or Alexa. If they can you can use them as a networking hypervisor.

I appreciate all the help. Resetting the Tuya bulbs and then trying to figure out how to integrate them might be the way to go. I do like these bulbs for their brightness (100 watts) and colors, but again, they just aren't reliable.

My only hesitation are those instructions for Tuya integration and 393 posts. I'm pretty new to this stuff and I'm not sure my skillset is at that level, but I might try.

I also appreciate the bulb recommendations. My only hesitation there is the cost since I already have these Tuya bulbs and they are cheap. You get what you pay for I guess.

Ultimately, if I were to get new bulbs, I think I'm just asking too much. My basic requirements would be something like this:

This post was flagged by the community and is temporarily hidden.

Just my 2 cents, I have had Sengled, Tuya, Gosub and a bunch of other mid/cheap bulbs. If all you want is a "white" light I think these are fine, reliability is questionable though. I had a lot of issues with color on most of these bulbs. For example, on Sengled, selecting yellow gets you orange, Custom colors arent even close and just dont look correct.

I havent tried Lifx, but it seems forever on these boards if someone uses Wi-Fi anything you get blasted that that isnt what hubitat is for, so I havent tried them.

For me, I really like hue. Much better colors, if you select a color in a rule it is pretty close to that color. There is a hubitat app for the hue app called CoCo Hue, that will import scenes and labs from the hue app, which is awesome and works perfectly.

I know they are expensive but they are very reliable and do what you want them to do. I use inovelli blue and red switches, as well as some pico and they all work great together.

I havent tried Lifx, but it seems forever on these boards if someone uses Wi-Fi anything you get blasted that that isnt what hubitat is for, so I havent tried them.

havent tried Lifx, but it seems forever on these boards if someone uses Wi-Fi anything you get blasted that that isnt what hubitat is for, so I havent tried them.

You should. They're fantastic. Superior color and brightness. 100% local control with native hubitat integration

If those bulbs truly are Tuya, the user created cloud integration works pretty good. I have it connected via the Smart Life app to a single LED strip. You can use the Tuya app or "Smart Life" app, they both do the same thing I just like the look of the Smart Life app better. With a little bit of extra tinkering I have LOCAL control over Wifi with the cloud connection as a backup, using the devs published local child drivers (with a few modifications). Has been pretty solid. I can control on/off colors and also enable scene mode, cannot select the scene but we only use one and it stays on the one you have selected so it works out good.

Here is my post on that thread that explains it: [BETA] Tuya Cloud Driver (Limited device support) - #398 by jtp10181