I have a Button Controller 3.1 child for a RGBgenie ZB-5001 remote, where I programmed some buttons to set color and level for a CoCoHue group: 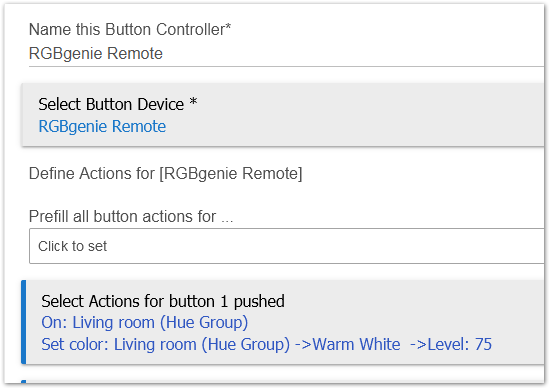 When I push this button, the color is not being set, and I see the following error in the log:

The same CoCoHue group works works with Simple Automation Rules, Scenes, etc.
Also, the Button Controller works fine with "Turn On Switch" or "Set The Scene" actions (no errors) - just not with "Set Color and Level"...

I don't have that particular button device but can't replicate this issue with a new instance of BC 3.1 that I set up with another button device. If you try re-creating this automation, I wonder if it might just work; otherwise, I'll tag @bravenel here to see if there's any piece of your setup or logs he might want to troubleshoot this error, which does appear to be originating from BC.

PS - While you didn't ask, you could simply your actions a bit. If they aren't already on, the "Set Color" command will also turn the CoCoHue bulb/group on (unless you happened to enable the pseudo-prestaging option). That would have no bearing on the above issue but will likely make your lights respond better/faster since you aren't sending two group commands in a row, something Hue recommends limiting to 1 per second.

I just created a button controller 3.1 instance with 2 Lightify 4-button switches and my dining room lights (which are on my other HE hub shared via HubConnect). I get errors thrown for every command except off 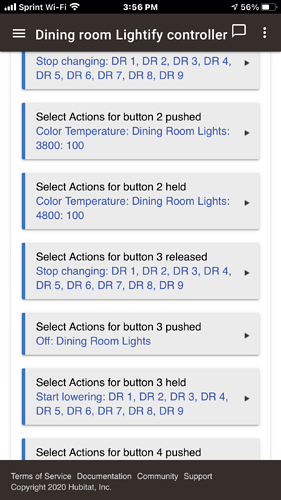 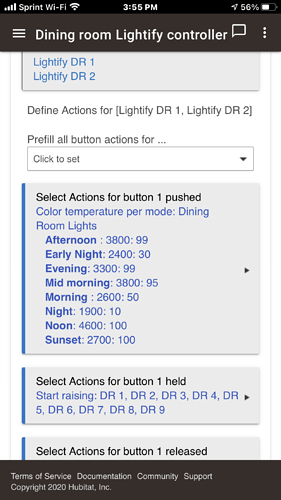 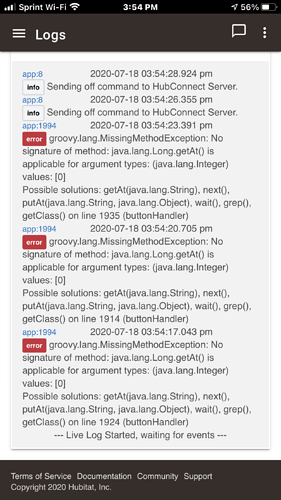 There is indeed a bug in Button Controller 3.1. It's been identified, and will be fixed in the next release.

@bertabcd1234 Indeed, originally I had just "Set Color" in there... But when that didn't work, I was trying all I could think of

@bravenel Not sure if this is related to this bug but I am having an issue with assigning the "Adjust the dimmers" action to a Pico. 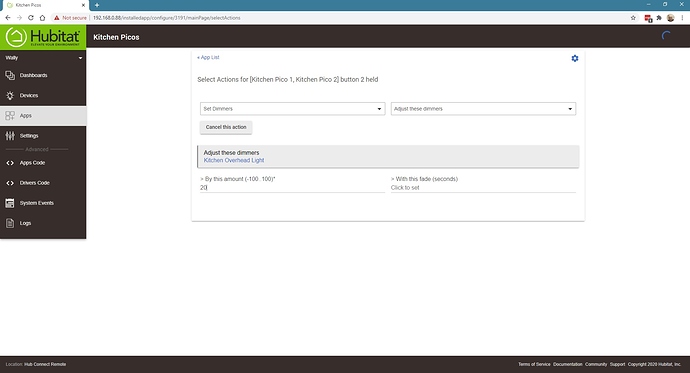 As soon as I click below so the Done button will show, I get the following: 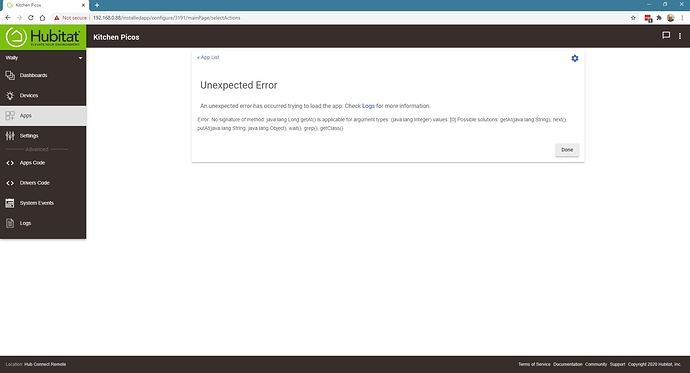 Unless I click Remove to get rid of the whole thing, this shows anytime I click on this button action afterwords. I cannot go back and change it to something else. "Kitchen Light" is a group of 3 bulbs created by the Hue controller although it did the same when I tested with only 1 bulb selected.

This action works fine in BC 3.0, I was only trying to move to BC 3.1 so that the two Pico's I have in some rooms didn't need separate rules anymore.

Please open a tab in your browser with Logs, and do the step above again. It will provide better error information for us to track down.

Below is the only event that occured.

Yeah, this is a bug. Will be fixed in the next release.

As a work-around, do that one button in Rule Machine for now.

Thanks for verifying. I'll wait. I already have it setup in BC 3.0 so it's working. Just wanted to switch over so my rooms with 2 Pico's in them only needed one rule.

Yes, how many times do I have to say it: Adjust Dimmers has a bug. It will get fixed, but it has not been fixed yet. Use an individual button rule in RM to work around it.

Sorry, not looking for you to repeat yourself but I have updated since that and didn't know if it was fixed in the later release.

It will be in the release notes when it is fixed.

I apologize, but your post leads me to believe that you thought that this issue was resolved. It isn't. I am not rushing you to fix this. I posted that I am using your work around. I was only trying to help. I get that you are stressed, but.....

The final response to my initial report confused me a bit also as you didn't reply back after stating I was on the version asked. Apologize if you feel harassed. It's not my intent. I do read the notes before installing but unless I am missing something, they don't change between minor updates. I guess you are meaning the notes in the community announcement.