We have issues with both iPhones in the house occasionally not updating presence status in HE. I would say at least once a week, perhaps more, each phone fails to update when coming or going. After a quick search, I can see I'm not the only one with this issue. A post on one of the threads mentioned that you can go to the Settings page in the app and tap Send Geo Event to update the phone's presence. I have found that this works.

Now, any way to get this functionality in Rule Machine? I am thinking of two uses.

First, I would like to create dashboard tiles to update each phone so that if I'm looking at the dashboard and see that the status of one of the phones isn't correct, I could just tap the tile to update.

Second, I would like to trigger an update in conjunction with the iPhone WiFi Presence app. I don't want to rely on WiFi presence to trigger location-based automations because a device could become disconnected from the network for reasons other than physically leaving the home. So I am thinking that I can use device disconnect to trigger a location update in case the phone DID leave home and the location did not automatically update. Then if the phone actually has left, the location-based automation will trigger when the phone's presence changes.

Now, any way to get this functionality in Rule Machine?

I’m not sure I understand, but are you looking for a way to use Rule Machine to trigger a “send Geo event” on the Hubitat app on your iPhone?

I'm not aware of any way to automate an action in an iOS app. I find that opening the Hubitat mobile app every day or two helps it send accurate presence most of the time, but I'm combing two methods (this plus HomeBridge) to make it better for me. Presence seems to be flaky for a lot of people, and this is a common, though of course less than ideal, solution.

Sounds like you read the other threads and I posted the same question in one. I have rules setup that warn me when the phones do not update properly and if I see them I can manually go and do a send geo event and get things back on track. Getting my wife to do that is another story. I to would like to be able to do a send a Geo event without having to physically open my phone to do it.

As I mentioned above, I do not think that is possible.

Getting my wife to do that is another story.

OK, I think maybe I didn't phrase my original question quite accurately. I did not think there was a way for HE to automate an action in a phone app. Rather, just as there is a "send geo event" option in the phone app, is there a similar option on the hub? In other words, I want to be able force an update (poll, refresh, etc.) for the phone's location in case the phone did not automatically update when crossing the geofence. When I open one of the phones from the Devices page in the hub's web UI, there are Arrived, Departed, and Device Notification commands available, but no refresh. Would like to see a refresh option here.

You could pay the small amount of cash for the WebCore presence app and then use that. I used to use it in ST and it was very reliable (and accurate). I've not tried it with HE as yet, however I might be doing that soon. I'm in this thread because I was looking for info on why the GEO is unreliable as my presence says I'm not here when I am

And I’ve just found this, time to test

Install WebCore
Install the app on your phone (it costs 2.99 in the UK)
Install the WebCore presence sensor driver in HE
Then from HE open the settings for WebCore and 'register a new browser'
Use that code in the phone app to create a presence sensor

This works great, you can setup multiple locations so you can then do rule based actions depending on where you are.

Loving this thread, not loving the WebCORE idea.

In my use case I use Life360 and Mobile App for presence detection, but I too often find one or the other will arrive/depart and the other misses the change. For Life360 the solution is easy, Push the Life360 Refresh button and it polls the device for location - and this works as long as Life360 cloud is working.

Again, in my use case, if I detect a difference between Mobile App and Life360 I have a rule that pushes the Life360 button. It would be nice if I could send to both apps at the same time.

I have found another option for triggering on my location. You can set up routines in the Alexa app to trigger on locations.

Using it on my phone is working well. I now have a trigger I can use when I get to my office. I had been using an trigger based on my garage door opening and closing and the usual time it takes for me to drive to my office. Now the Alexa app triggers it just as I drive in the parking lot. I am still working on getting it to work on the wife's phone. I think I have a solution using the custom actions but I'm still testing. Her phone can't access smart devices in the routines.

Any progress here? I would think it would not be hard to tell the mobile app, "hey, if i receive a message that says " - send a GEO event instead of alerting the app. No?

@bravenel Hey Bruce, I don't think anyone from HE team has reviewed this idea.

I use the hubitat app and WiFi for presence, any of them turn presence and the house knows we are home all 4 not presence and we are out, both mine and my wifes wifi presence is good, the Hubitat app on my phone is pretty good the wifes is abit hit and miss when departing so ive used webcore to sort it.

seems to be working quite well so far takes abit longer but as i get more comfortable with it working (ie. the alarm doesn't activate when the wife is at home) ill trim the timers down 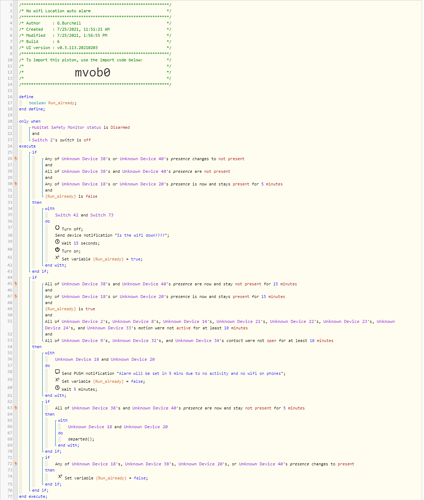