That seems like something the device or device driver should handle to me.

Yup. It turns out the fundamental problem is that I was traveling between the UP and MID points without realizing it so the open-to-percentage commands were doing weird things.

Has anyone managed to get this app to expose a fan with speed control to google home?
I have setup speed control in GHC but GH just shows an On and Off button for a fan. No speed control.
Traits appear to be setup. What am I doing wrong here? 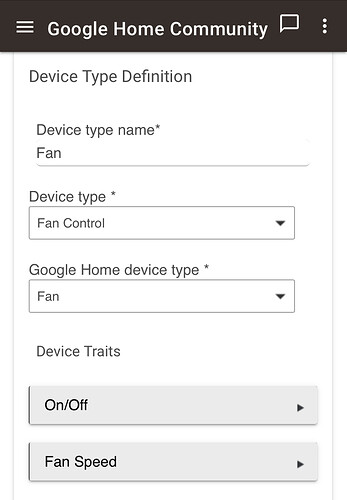 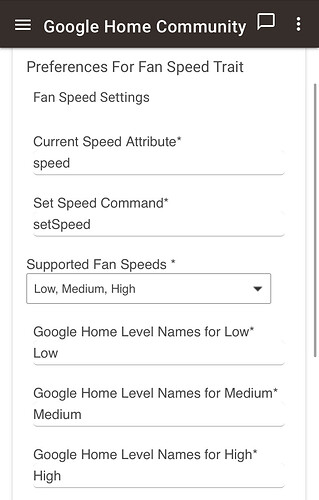 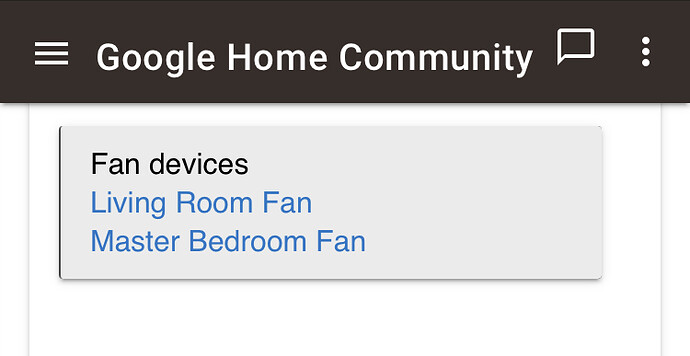 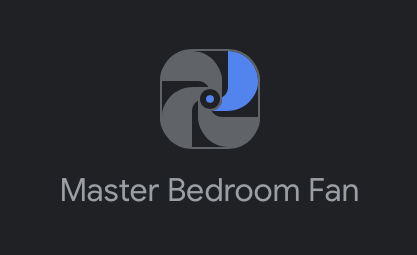 Has anyone managed to get this app to expose a fan with speed control to google home?

The Google Home mobile app does not have UI to control discrete fan speeds. You can control fan speeds via voice commands.

You can also select the fan speed on Nest Smart Displays, but unfortunately not on the GHome app.

I think I know the answer here, but GHC is exclusively getting SensorState from the Google cloud API, right (as opposed to the local Nest detector device)? I'm asking to that I can understand how things will behave (1) if Google's Cloud does down, is slow, etc and (2) if my environment gets fully airgapped -> will HE local execution ever get inputs about smoke such that it can do anything? (probably not)

Correct, all communication is done via the cloud right now. Google does have a local exec API, but it's not currently used by GHC.

GHC also never "pushes" any data to Google; it only responds when Google asks for something. That means that for something like a smoke detector it won't be able to push alerts to you. Again, Google has an API for that, but it's not implemented due to Hubitat platform limitations. @bhamiltoncx created a feature request for what we would need, and the Hubitat devs didn't seem to be against it, but there's not been a concrete answer yet.

Gotcha. Just out of curiosity do you have any existing plans to do anything with the local API? Obviously my use case is specifically about push alerts and that's a whole different problem (thank you for mentioning that relevant detail!), so ignore that example and think more about thermostats or some other device you might wish to control locally.

I'm not asking for any features, I'm just curious what may or may not already be in your plans. I don't think my ideas here are sufficient to justify that level of effort.

See the discussion on this issue for my thoughts on local fulfillment. If Google is able to do speech recognition locally on the device it could speed things up a bit or allow things to possibly work while your internet is down. If they can't, then it likely won't make much, if any, difference. I think it's worth doing eventually, but it's a lot of work for potentially only a very small gain.

Hi, I have a question that's probably answered in this thread so apologies if it is.. I tried skimming through the posts but there's a lot to go through.

Anyway, I can just try it out but the setup seems a little complicated so I wanted to ask first. Ultimately, I'm just looking to know if this can be used instead of the built-in driver.. I do use Google Assistant often to control my Hubitat devices so it's an important one for me.

This integration provides much more functionality than the built in google integration.

For example, I've been looking at a log entry from the built-in Google Home driver for 2 years now:

Smart assistant stuff imo has always been given back burner for other projects deemed more relevant to the target user base. (something like people with 5 or 6 devices).

This integration provides much more functionality than the built in google integration.

Definitely this. For example, Google Home supports dozens of device types with many more types of actions than the built-in integration supports.

Great app, glad I found it, solved my device import challenge into GH. only challenge I have is none of the sensors I imported have the link allowing me to trigger the action from the app. I can use a voice command but not by interacting with the device on the GH app. am I missing something?
apologies in advance if the answer is buried someplace in this thread... i tried hunting for it

I THINK I know why Google is (selfishly) doing this. If they allow the app to have full control, then there is no need for the Hub devices, everyone could just use tablets. Nonetheless, I still think the app should work like the Hub devices.

I get to the login, I select my door lock I set up, but after I press Authorize it does the thinking spinning and then spits out that error, Can you help me?

If you turn on debug logging in the Hubitat app, do you see anything in the Hubitat logs when you try to pair with Google Home? If so then it's likely an issue with the device config; post the log messages here and I can take a look. If not then it's likely an issue with the OAuth config or fulfillment URL in your Google Action.

Came across this app and got it installed and running. Excellent work. So refreshing to finally be able to connect fans, door locks, curtains, etc correctly. (Though I do wish Google would give us a proper UI in the Home App for these device types...)

Anyway, just wanted to pop in with the rare feedback that this app is working and I got it installed with no issues. A+ Highly recommended.

Debug is on for the app, but nothing is showing when trying to connect. I copied (ctrl+c) everything from the OAUTH setup to the developer section per instructions on here. Tried it 4 different times and none of the apps will connect. They all have the same error and I even deleted the app and reinstalled and ran through the instructions again verbatim but still no dice.

I copied (ctrl+c) everything from the OAUTH setup

Double check the OAuth client secret. Hubitat blocks you from copying that in some browsers, and it's obscured in the Google interface, so it's easy to think you've pasted it in there when you really pasted the client ID again. Try to copy it into notepad or something first and check that it matches what's shown in the Hubitat UI.

I finally got it to work after the 5th time recreating the project and got my front door lock connected. But after that I went and added the rest of my devices and tried to resync to add the new device and got the same error as before (when I didn't have any devices setup, just the modes), so I tried reconnect account, error again.... Any ideas?