Yes overall Amazon is quite reliable for me. As long as it’s something shipped and sold by Amazon.

If it’s a “marketplace” seller, then all bets are off. Some are just fine, many are not.

The online platform doesn’t really matter. There are unethical sellers on eBay, Amazon, Alibaba, etc. Reputation scores for sellers can help, ultimately it’s always on the buyer to protect him or herself before clicking purchase.

Edit: low-hassle dispute/return and buyer-protection processes help too. But that’s already a loss for me if I have to resort to that, my time is valuable.

UPS, fedex, USPS, sure there are problems sometimes too, but they don’t report a package as delivered when it wasn’t.

In my area USPS often reports packages as delivered that were not, presumably to meet Amazon delivery timeline requirements in their contract.

I was so happy when Amazon went back to not using USPS in my town.

I actually look at that when I buy on Amazon. If it isn't "shipped by Amazon" I'll only have it shipped to my PO box as I know my mailman won't bring it to me. And complaining to the Post Office that your courier sucks is as useful as pissing upwind.

I used to be very wary of Marketplace vendors, I had been burnt by those in the past.

But I have noticed that as my volume of sales went up the issues with Marketplace vendors decreased.

Not sure, but if I raise an issue with Amazon and it is relating to a Marketplace vendor, they immediately refund me, very rarely ask for the item back and it is done.

Actually I had one last week, I had forgotten about it, while I was watching TV I raised an issue and bang refunded, no fuss, didn't even want it back.

Something I did find

Last year Amazon UK removed the ability to download reports on your Orders.

I have seen press articles and web pages on this removal but no suggestion on how to get the data mow.

You can go here and with your amazon.co.uk credentials you can request pretty much anything that Amazon have on you, including a full data dump.

I have asked for it and they say it can take a month.

But that should include 13 years of Amazon shopping and could be interesting reading, if not a little depressing

hi there, quick question, I've got this one


detected by hubitat, my question is: which drive you're using it with ? 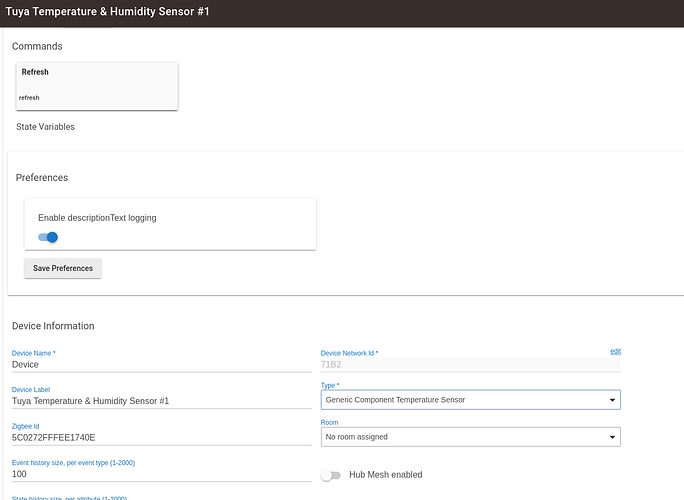 Maybe one of these?

aye. in the meantime i found this article. the generic motion / humidity one works just having the same issue as others that it transmits very infrequently.
thank you for your reply

I have one of those. Don't bother. It's useless.

which one you recommend instead?

I mainly use aeotec M6. Those are expensive but very reliable (Zwave). On the cheap side sonoff works fine. I had no problem with them even though they are zigbee.

These are good.. just installed one in our upstairs hall bathroom.

I have several of these: They're very responsive, reasonably accurate, and work with Hubitat. The only caveat is that they're restricted to zigbee channels 15, 20, and 25. I have a couple SmartThings zigbee outlets that I use for power monitoring, but I don't know if they're rated to handle the high influx current a dehumidifier is likely to have when the compressor turns on. Zooz has an outlet that may be more appropriate for this use.

The best Temperature sensors are Hue Motion Sensors, (£29) I am using ~30 of them for many years, they are rock solid on a Hue hub. They have the added advantage of running 2 years on two AAA or AA for external variant. Also the battery reporting very accurate and you can run them down to 20% and know you still have a good few couple to get around to changing batteries. Plus of course it has Motion and Luminance. These are the best bang for your buck if you are using zigbee.

They were not so good on the HE Hub until I added 4 Ikea zigbee Relays (£8 ea) and now they are great.

I have been using Secure Zwave SRT321 (known by multiple different names), for a few years, they are thermostats but report temperature accurately like clockwork every 5 or 15 mins. They can chew through batteries so converted 10 of them to use battery eliminators

I have been testing the Sonoffs for last 5 months and found that I get a disturbing amount of failures , that makes them unsuitable for heating systems, from them where instead of reporting every 15 mins they can go hours or days without reporting. I have had two fail on install because they were poorly assembled and the pairing pin was not properly seated so when you. press the Pair button the micro switch beds and breaks off the circuit board. They are cheap and if reliability and build quality is not an issue then fun to play with.

I have been testing two other Temp sensors for the last month or so that are looking very promising.

ZWave (£30)
Aeotec AerQ - which I have set to report when Temp changes by .5C and that is doing very well indeed. They brought a built in driver for it in 2.26 but it is not quite there yet. and lacks that standard offset delivered for other built in drivers.

Zigbee (£15)
Tuya Temp/Humidity Sensor - which also just reports on change and appears to be very economical with batteries. So far have been showing a lot of promise.

Because I run multi zone heating I like to have multiple temp sensors per room and I try to have one zwave and one zigbee per room so they can audit each other and gives me a degree of redundancy.

Use the built in Sonoff Temperature/Humidity Sensor Driver
I've been using it for months and working great.
I think many Sonoff/Tuya zigbee devices are interchangeable
The only cons is it only displays in C, have to do conversation in my head to match the temperature from other devices.

so after a few weeks of usage, my verdict is the tuya TH sensor was complete waste of money.

since I'm going for an accurate humidity meter, this will just not going to work for me.
-- thanks very much for all of you for your help.

can you pls tell me a model? I have tradfri outlets but if there are relays too, I'll buy some.

Is what I am using.

The repeater part will go into any usb charger, so if the right hand output causes an issue.

I use these, I find them good temp sensors, can’t say I have paid much attention to humidity so can’t vouch for that part.

FYI, there are dry contact zigbee relays that work well with Hubitat. Here are a couple:

I got a lot of data to download, a mountain of it.

But most interesting was a complete list of everything purchased over the last 13 years.

Every recording made by echos around the house, not sure why they keep every interaction forever…