I implemented a custom driver for switches and exposed them to Alexa using the Alexa Echo Skill. Everything worked fine. I did not have to enable the "Respond Immediately without waiting for device" in the Amazon Echo Skill app.

I re-implemented the driver to use a parent/child architecture. With this implementation, I have to enable the "Respond immediately..." , else the Echo doesn't speak the normal "OK".

The switches turn on/off correctly, but after several seconds, the Echo says something like "I don't know what went wrong".

So, there must be some sort of reply needed from my driver or the Amazon Skill immediately after receiving the message from the echo. But, I didn't (knowingly) do anything like that in the original implementation. Here's the "off" implementation in the one that results in the "OK":

I tried moving the sendEvent before doing the write (so it would occur before the 2 second delay) but that didn't change anything.

Is it possible that it's because the sendEvent is issued from the parent instead of the child?

Alexa knows nothing about the parent--only the child devices were added to the Amazon Echo Skill.

Or, is the sendEvent event even relevant? Is there something else in a driver that must be done for Alexa to get the expected response? Or, should the Amazon Echo Skill (in Hubitat) take care of that?

But this isn't really Alexa-specific. If you just look at the (child) device page in Hubitat, do you see any changes when you run the "On" and "Off" commands there directly? I'd guess not (not unless you have more code that affects this than was shown above). If you're using Hubitat's built-in component driver for the child, you can see one way to do this in their example parent code: HubitatPublic/genericComponentParentDemo.groovy at master · hubitat/HubitatPublic · GitHub. Look at the childSwitchOff() or componentOff() methods to see how they use the parse() method on the child device to pass an event down do it (and you can look at the child driver code too if you want to see what it really does with that). I'm pretty sure you could also call sendEvent() directly on the child device, but I'd probably stick with the paradigm in their example unless you have a reason not to.

From what I can see, you're only calling sendEvent() on the parent (which you may or may not need to, depending on whether you still have a "switch" attribute on the parent device and if/how you want child device manipulation to affect it). As far as most apps, including Alexa, are concerned, there's no special relationship between a parent and child device--they're basically completely separate other than whatever you may do in the driver.

You are right on all you are assuming.

When I copy/paste the cd.parse command:

from the parent code example, I get the error:

It looks like the generic component switch doesn't have a parse method that takes an argument? Or, the expression

is not resolving to a "String" type in this context?

I see this in the logs:

Which says the expression does resolve to a string.

How can I confirm a Generic Component Switch actually has a parse(String) method?

Or, maybe I can set a required attribute a different way?

If you just look at the (child) device page in Hubitat, do you see any changes when you run the "On" and "Off" commands there directly?

Actually,I don't see any state variables in child device. There's nothing that indicates on or off on the child devcie page. It's a generic component switch.

In the child driver example, there are actually two parse methods, one that takes a String argument and another that takes a map.

Do all devices have these methods?

Generic component switch should indeed have a parse() method. Like the component driver, this takes a List, not a Map (and not a String, though that is technically implemented so the driver catches it instead of throwing an error; this is the type most other kinds of devices would use for this method).

If this isn't working for you, I'd either start with a simple parent/child driver to see if you can get that to work (I'm using this in one of my drivers, so it should work...unless I'm looking at the wrong thing) or pare down your existing driver to just this much to see if you can produce a minimal non-working example. On the way, you'll likely figure out what's wrong.

Yet the invocation of the child parse method (a direct copy/paste of the Demo Driver code fragment) is not recognized. I think it is a list of maps, but with just one map in the list.

Simplifying, I did this:

Not sure how I would simplify--I just can't seem to call the parse method in child Generic Component Switch.

I was able to call the child's parse method with a string an got the warning consistent with the child code you pasted.

I don't think it's possible to troubleshoot more without seeing the actual code you're working with. The parse() method on the Generic Component Switch driver definitely works as it should. Here is a minimal example like the one I was talking about, and it works fine for me:

A couple other thoughts that may be helpful given the error, though again I think you might be best served by paring down your driver to a minimal non-working example of the failure or working your way up from a minimal working example, either of which will likely show you whatever is wrong:

Thanks for the reply and suggestions.

*again I think you might be best served by paring down your driver to a minimal non-working example of the failure or working your way up from a minimal working example, either of which will likely show you whatever is wrong:

I thought I was working from a pared down version of the Parent Demo. The difference being I had a command in the parent to create the child rather than them getting creating without user input in the parent code. I'll go back and see if I can get the unaltered Parent Demo to work.

are you sure your device reference is a child device? (you wouldn't have access to parse() as a driver method, even if it exists as such, if it's not a device command, unless it's a parent/child relationship; from a driver, not an app, that's really the only other device you'd be able to access, so probably, but just checking...)

Well, it was created by the parent driver using addChild method. It shows up in the list of devices under the parent device:

How can I be sure it's a child device? The device page in Hubitat shows it as a "Generic Component Switch". Here's what it looks like on the device list page:

And its individual page: 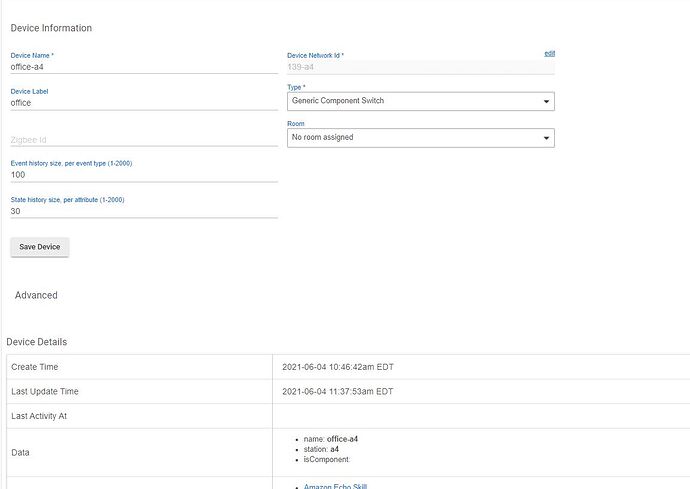 Are called in chlid devices. But, the parameter cd is not the child device itself, but cd.device

The on command in the genericChild code you posted:

The componentOn method in the parent must get the child device using:

That's in the demo. What confused me was the same variable name is used elsewhere in methods like this:

That cd is not the same type as the cd passed to the componentOn and componentOff commands!

Now the parse command gets called. I"ll check to see if the Alexa Echo Skill still needs to bypass waiting for a response.

Other than posting questions, how would one know what methods like componentOn and componentOff (and their signatures) exist for each component device? Are they all the same?

Yes, doing the cd.parse command eliminated the need to have the Alexa skill respond immediately without waiting for a reply!